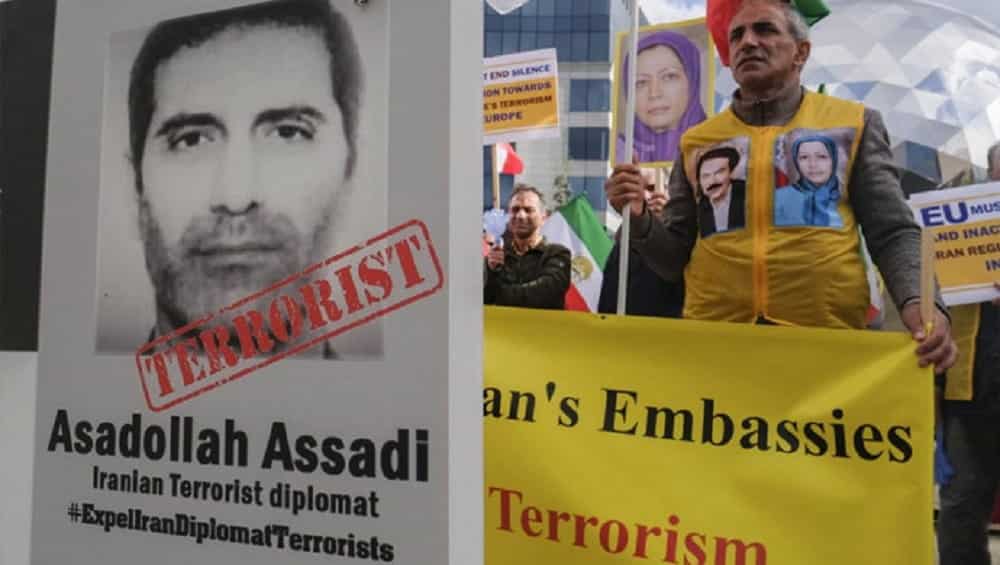 The Belgian parliament will be debating and voting on a treaty with the Iranian regime that many observers believe will pave the way for the release of Tehran’s diplomat-terrorist Assadollah Assadi, arrest, convicted, and imprisoned for masterminding the foiled plot to bomb the 2018 Free Iran Summit of the Iranian Resistance near Paris.

The mullahs cannot hide their jubilation over the prospects of Assadi’s release.

“We are hopeful that based on the measures undertaken and requests made and efforts that have been expended until now, we can see the freedom of this valuable Iranian diplomat, and we believe the Belgian Government must heed the legal and rightful demand of Iran and not be influenced by the hysterics of a notorious force that has a black image and dark record about the Iranian nation,” the regime’s Foreign Ministry spokesman Nasser Kanani said on July 13.

“The request for the expedited release of this dear Iranian diplomat was and continues to be among the requests of the foreign ministry and all related governmental departments in Iran since the start of his illegal detention and arrest and custody that is against the Vienna Convention,” the state-run Fars News Agency quoted him as saying.

Arrested in 2019 for plotting to bomb the “Free Iran World Summit” organized by the National Council of Resistance of Iran (NCRI) in France in 2018, Assadi was condemned to 20 years in prison. Many thought that Assadi’s conviction will set a precedent and result in firmness toward the Iranian regime’s unbridled terrorism.

Kanani’s brazen remarks show how the policy of appeasement, even before the adoption of the disgraceful deal, has emboldened the clerical regime. Tehran’s reaction to its treaty with Brussels also starkly contrasts the remarks of Belgian authorities.

Belgian officials have tried to sandwich the treaty with Iran’s ruling theocracy between two other treaties to cover up the concessions given to the regime after the court in Antwerp confirmed that the 2018 foiled terrorist attack was not Assadi’s personal initiative, but carried out on the orders of the Ministry of Intelligence and Security (MOIS).

Belgian Justice Minister Vincent Van Quickenborne tried to justify the deal by invoking humanitarian concerns and that the security and safety of Belgian citizens would be threatened.

“If the bill is not fully approved, the threat to Belgian interests and certain Belgian citizens will increase,” he said.

The plot for the great massacre in Paris could become the largest terrorist incident in Europe. If adopted, the bill will encourage religious fascism in Tehran in advancing its terrorism. No one in Europe will be safe vs. the murderers ruling #Iran. #DontFreeTerrorists

Belgium is not just cloaking this despicable treaty under justice and humanity, it indeed hides the truth and the severe repercussions of this ill-advised deal. The remarks by Tehran’s Foreign Ministry are a testament to this reality.

If and when the Parliament adopts the bill, Tehran would not only have its diplomat-terrorist released but it will be emboldened to wreak havoc and terrorism in Europe.

As Politico wrote on July 1, this treaty “comes as European leaders are panicking over energy prices and are increasingly eager to repair relations with Iran in the hope that the Islamic Republic can resume its role as a major supplier of oil and gas.”

Even if one were to accept the reasoning proffered by the Belgian government to justify this treaty, the argument fails considering that the last four decades indicate the mullahs do not respect any treaty or arrangement and prioritize what is the best to save their ominous rule?

Did releasing terrorists such as Anis-Al Naqqash, who attempted to assassinate an Iranian dissident in France, reduce the regime’s terrorist activities or encourage it to plot such a large bombing in the heart of Europe in 2018?

Did signing the Iran nuclear deal, formally known as the Joint Comprehensive Plan of Action (JCPOA), prevent Tehran from advancing its nuclear program? Or helped it secretly run its nuclear weapons program while enjoying a windfall of cash provided by Western governments to fund its illicit activities?

Did negotiations with the regime while ignoring dramatic human rights violations in Iran prevent the mullahs from ramping up executions and mass killings? Didn’t it result in the ascendency of a mass murderer, li Ebrahim Raisi to the Presidency?

When will the lesson be learned? You cannot reason with a wolf when your head is in its mouth; you should kill it. Anything shorter than a firm policy toward the regime would only jeopardize not just Iranian dissidents but also millions of Europeans. So, Belgium should think twice.