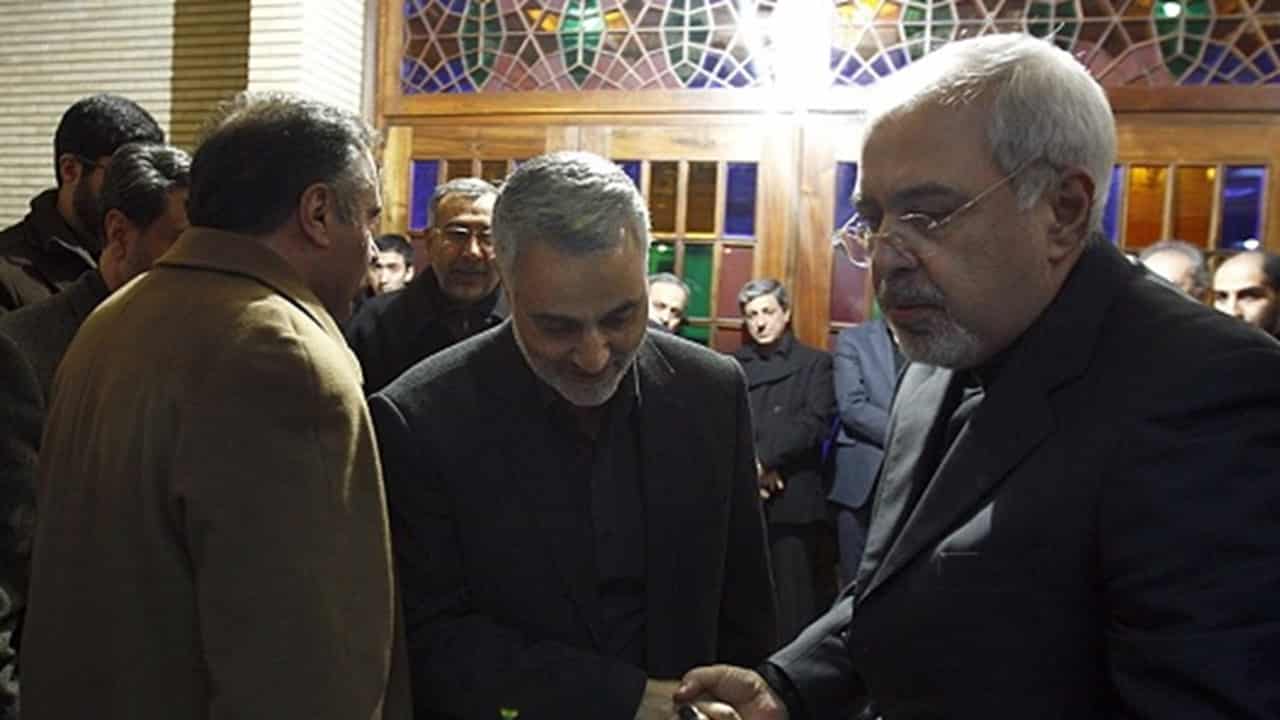 Baharvand published these notes the day before the anniversary of Soleimani’s death on January 2, 2020.

“I will never forget that when I went to the Political Studies Office of the Ministry of Foreign Affairs almost every Tuesday at 7:30 am to attend a strategic meeting on foreign relations, I saw the glorious martyr, General Haj Qassem Soleimani, who was escorted out of the meeting room by Dr. Zarif,” Baharvand wrote according to official ILNA news agency.

Baharvand highlighted that Soleimani “regularly came to the study office at 6 am on Tuesdays and had a coordination meeting with Dr. Zarif until 7:30.”

Who Was Qassem Soleimani?

Qassem Soleimani was the commander of Iran’s terrorist Quds Force, an extraterritorial arm of the Revolutionary Guards (IRGC). Born in 1957, Soleimani joined the IRGC during the early years of the Iran-Iraq War.

He quickly rose to the top of the IRGC command because of his cruelty and loyalty to the regime’s Supreme Leader, Ali Khamenei.

Khamenei appointed Soleimani as the Quds Force commander in 1998. The Quds Force plays a unique role in the IRGC and is tasked with orchestrating the regime’s meddling in countries of the Middle East, from Iraq to Syria and Yemen, and as far as the African continent.

After Saddam Hussain’s fall in Iraq, Soleimani organized the regime’s terrorist proxy groups in that country, making the regime’s foothold in Iraq stronger.

Soleimani commanded attacks on the Iranian opposition members in Camp Ashraf and Camp Liberty, killing over 100 members of the People’s Mojahedin Organization of Iran (PMOI/MEK). Soleimani also ordered the killing of thousands of Iraqi nationals and was behind targeting over 600 American soldiers in Iraq.

Since the beginning of the Syrian War in 2011, the Iranian regime has been spending the Iranian people’s wealth to prop-up Bashar Al-Assad’s dictatorship. Soleimani traveled to Syria frequently. Soleimani oversaw the formation of pro-Syrian militias and the deployment and organization of tens of thousands of militants in the form of the Fatemiyoun brigade of Afghan mercenaries, Zainebiyoun brigade of Pakistani mercenaries, and Abolfazl brigade of Iraqi mercenaries.

Mahmoud al-Zahar, a senior member of Hamas’ leadership, told Al-Alam, the Arabic-language network of Iran’s state-run television, on Sunday, that during a 2006 meeting with Qassem Soleimani in Tehran he explained “the fundamental problem of staff and social services of the people of Gaza” to Soleimani. “Haj Qassem immediately responded to our request, so that the next day, when the trip was over, I saw $22 million in our luggage in the airport.”

“During the 1999 and 2009 seditions, Haj Qassem was on the streets to fight the anti-revolutionaries and took effective measures to contain the insecurity and riots,” Mohammad Ali Jafari, the former commander of the IRGC, acknowledged in February 2020.

The National Council of Resistance of Iran (NCRI) published a detailed report of the Quds Force’s terrorist activities led by Qassem Soleimani. The report is available here.

Due to his crimes, the people of Iran and other countries in the region hated Soleimani. Once he was eliminated, people in Iraq and Syria poured onto the streets, celebrating his death.

On Thursday, December 24, in an interview with Afghanistan’s Tolonews Television station, once questioned about the regime’s role in sending Afghan refugees to fight in Syria, Zarif tried to downplay the extent of this crime.

When asked whether it was true that 25,000 Afghan refugees were in Syria, Zarif deceitfully said he had heard there were only 5,000, of whom less than 2,000 were currently in Syria.

The interviewer pressed further, asking Zarif: “You had earlier said you are an international relations expert. Where in the world have you seen (a government) recruiting refugees and sending them to a third country (to fight a proxy war)?

Zarif: “First of all, most of them were not refugees. They came from Afghanistan and went there. Perhaps, they might have gone to other places too.” The interviewer presses on: “So, if I want to take up arms, will you send me to Syria?”

“We may arm you when you end up in Syria,” Zarif bluntly answered.

November 27 and December 3 marked the trial in Belgium of Iran’s incarcerated diplomat-terrorist, Assadollah Assadi, and his three co-conspirators. Assadi and his team tried to bomb the NCRI’s annual “Free Iran” gathering in 2018 near Paris.

As Assadi’s superior authority, Zarif not only facilitated the operation but was also fully aware of it. When his diplomat was caught red-handed, Zarif tried to portray this terrorist operation as a “false flag operation.”

In March 2018, the Albanian police thwarted an attack by Quds Force operatives against the MEK’s gathering near Tirana. Following the MEK’s relocation to Albania, the regime’s terrorists plotted several times against the MEK members and the NCRI’s president-elect Mrs. Maryam Rajavi.

In December 2018, Albania expelled the Iranian regime’s ambassador and another diplomat terrorist for their involvement in the terrorist plot to attack the MEK gathering in March 2018.

Zarif once said, “Commander Soleimani and I never felt we have any differences. We have been working together closely for over 20 years. During the U.S. attack on Iraq, as Iran’s representative in New York, I had the greatest coordination with commander Soleimani. Subsequently, when I became Minister, the two of us decided to make sure we meet at least once a week when we were both in Tehran to review the latest developments and undertake the necessary coordination.” (State-run daily Entekhab on September 1, 2019)

Zarif’s words and actions, his regular meetings with Soleimani, and his direct involvement in terrorism once again underline there is no difference between Zarif and Soleimani.

Thus, it is imperative for the international community, mainly the European Union, to blacklist Zarif and stop negotiating with a terrorist regime representative.