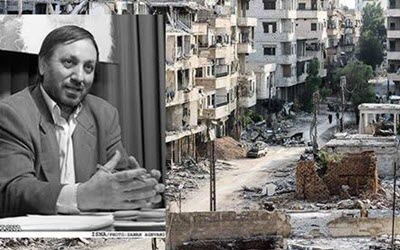 NCRI – Yadollah Eslami, former member of Iranian regime’s parliament: should the price of remaining Assad in power be the destruction of a country?

In a clash of rival factions, Yadollah Eslami, a former member of the Iranian regime’s parliament, has brought the Syrian war into question, calling it the Syrian Vortex.

According to the state website ‘Baharnews’ on October 3,  in an article titled ‘Should remaining Assad in power be at the expense of a country?’ Yadollah Eslami has written in his twitter account: “What is going on in Syria? Why the Syrian people should have such a fate? What’s the good of the widespread killing, displacement and homelessness of the Syrian people?

Eslami points to the Iranian regime’s support from Assad and says: “is remaining Assad in power worth the destruction of his country and a widespread ethnic and religious war?”

This former member of the parliament also questions Iranian regime’s role in Syria and its alliance with Russia in Syrian war and asks: “what role will Iran-Russia alliance have in the future of Iran and the region? What impact will Russian bombardments in Syria have on the way the Syrian people look at Iran?

Yadollah Eslami points to the Iranian regime’s huge investments in the Syrian war and writes: “will the amount of investment Iran has made in Syria, ranging from manpower to financial support and resources, bring the expected benefits for Iran?

Finally, Eslami raises a question and asks: “will it be easy for Iran to get out of  the Syrian vortex?” He adds: “has Iran’s alliance with Russia in the Syrian war been based on foresight and national interests? Has this decision been made based on a consensus among the country’s leaders and administrators?

This former member of the parliament adds: “there is a broad range of such questions and although some try to give simple answers and move on but they know that what they say is not an answer. The consequences of (Iran’s) presence in Syria will not be as simple as some say. Frenzies will fade away and wise questions will take their place. Then it will be time for answering!”