Iran: In Tehran, Anxiety Grows Over Possible Consequences for Plotting Terror in the West 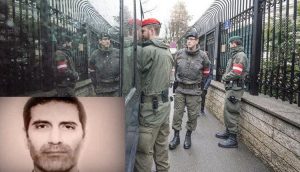 Tehran has tried everything in its power to prevent its agents from facing consequences for plotting a terrorist attack on European soil. But the diplomat Assadollah Assadi and his three accomplices are still scheduled to face trial in Antwerp on November 27. Their likely conviction follows a two-year investigation into a foiled plan to bomb the international gathering that was held near Paris on June 30, 2018, organized by the National Council of Resistance of Iran.

That coalition is led by the People’s Mojahedin Organization of Iran (PMOI-MEK), a pro-democracy group that has enjoyed a strong foothold in Iranian society since before the 1979 revolution. Its social influence and organizational strength became especially apparent in the months just before the Paris terror plot was thwarted. In fact, leading Iranian authorities reportedly ordered an attack specifically in response to a nationwide uprising that began in the final days of 2017 and continued through much of the subsequent month.

This was effectively confirmed in the midst of those uprisings by none other than the regime’s Supreme Leader Ali Khamenei, who acknowledged in a speech that the MEK had “planned for months” to facilitate the unrest while popularizing stark anti-government slogans that left little doubt about the popular demand for regime change. The uprising was therefore a serious challenge to the regime’s claims of legitimacy, and by extension, to its hold on power. It is therefore easy to imagine that there is little the regime would not have been willing to risk to undercut the movement at its source.

That was clearly the goal that Assadi and his handlers had in mind when hatching the 2018 terror plot. But now that it has failed, they are forced to come to terms with the consequences of the risks they took on. While some officials have responded by offering careful public statements that entreat Western authorities to let the incident slide, others seem inclined toward the public. In the latter category, we can find Assadi himself, who was quoted in interview transcripts as threatening still further terrorism in retaliation for his pending conviction.

According to Assadi, there are militant groups inside Iran as well as in several surrounding countries that are watching the proceedings closely and expecting European authorities to “support them.” The implication of those remarks was clear, yet Assadi’s defenders have more recently attempted to deny that they constitute a threat. At the same time, though, Javad Zarif, Iran’s Foreign Minister, and his Ministry have insisted, without further explanation, that the diplomat’s arrest was “fundamentally illegal” and that the regime reserves the right to a “proportional response.”

This more formal threat by Zarif’s ministry clearly indicates that Iran’s foreign ministry and their embassies around the world are the centers operating the terrorist attacks on European soil and Assadi’s trial is not just a trial of some individuals, but rather a trial of a number one state sponsor of terrorism and especially its foreign minister, as the main perpetrators of the terrorist attack.

A senior official at Belgium’s state security service, pointed out in recent media interviews that the 2018 terror plot “was not a matter of Assadi’s personal initiative” but had been conceived and approved at the highest levels of the regime’s leadership.

When such aggression is a matter of official state policy, it cannot go unanswered by the would-be victims. And if the prospective French location of the bomb plot is not reason enough for European governments to think of themselves in these terms, they should bear in mind that the attack would have almost certainly killed high-profile Western citizens if it had not been disrupted. The United States, Britain, and other leading Western powers were each represented by dozens of political dignitaries at 2018’s Free Iran rally, at which overall attendance was estimated to be somewhere on the order of 100,000.

In response to this terrorist act on European soil, the Western governments should increase relevant economic pressures as well as close the embassies through which terrorist diplomats like Assadi have been allowed to operate for so long. They should also stop welcoming Javad Zarif, as the main person in charge of the regime’s embassies and their terror acts, on their countries and they should designate him and his ministry as a terrorist organization.

None of this rises to the level of the retaliatory threat that Assadi offered to Belgian investigators, but it is arguably even more effective at instilling fear in the hearts of the mullahs. This is because they understand that in the wake of the January 2018 uprising and the ensuing failure to disrupt the Resistance movement, the regime is in its most precarious situation since the early days of the regime.

The unrest that began approximately three years ago is, to a great extent, ongoing. In November 2019, the regime was faced with an even more widespread uprising, which spread the same message of regime change to as many as 200 cities and towns. And although the coronavirus pandemic has lately slowed the pace of public demonstrations, the authorities have remained noticeably fearful of the MEK’s organizational power.

That fear has persisted even as Tehran clung to the hope that its pressures and appeals would stop the West from politically retaliating against the thwarted terror plot. It is easy to imagine how much more deeply concerned the mullahs would be about the future of their regime if it was clear to them that Western pressures were making the ground even more fertile for future uprisings by the democratic Resistance.