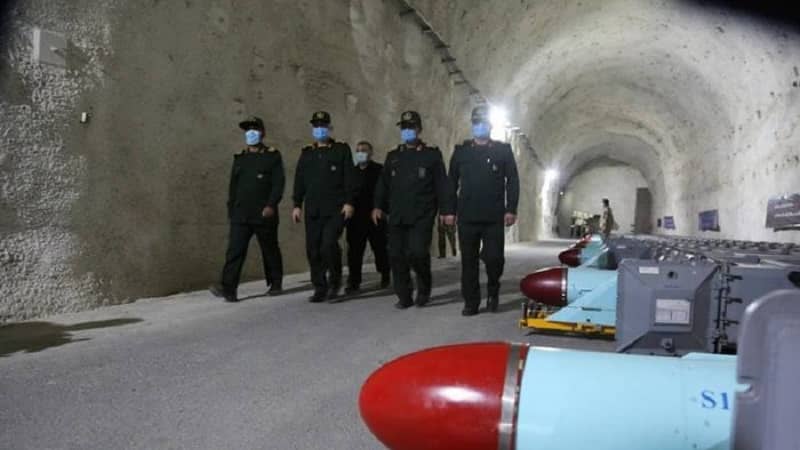 While Iranian people are struggling with rampant poverty, and over 200,000 citizens have perished due to the regime’s inhumane coronavirus policy, Revolutionary Guards (IRGC) Commander, Hossein Salami unveiled a new missile base on January 10.

The IRGC’s unveiling of this missile base once again confirms terrorism is an inseparable part of this regime.

Since its foundation in 1979, the clerical regime in Tehran has been spreading terrorism abroad, using it for exporting domestic chaos and as a blackmailing tool in its relations with the world community.

The regime has legalized its terrorists’ activities, under the banner of “export of the Islamic revolution.”

The IRGC and its Quds Force have been implementing this strategy for the past 41 years.
The regime has played an important role in ongoing violence particularly in Iraq, Syria and Lebanon.

Reuters recently exposed Iran has spent “$600 million” for the “expansion at the Imam Hussein shrine.” This project is under the supervision of the “Holy Shrines’ Reconstruction Headquarters,” one of the IRGC front companies to export and promote terrorism.

Heshmatullah Felahatpisheh, the former Chairman of the National Security and Foreign Policy Commission of the regime’s parliament, on May 20, 2020, said that the regime had paid Syria up to $30 billion.

“I went to Syria, some people said I made up some expenses, but I repeat, we may have given Syria $20 to $30 billion, and we have to take it back,” he said in an interview published by the state-run Etemad Online news agency.

But the regime’s terrorism is not limited to the Middle East.

The historical trial of Iran’s diplomat-terrorist, Assadollah Assadi, in Belgium on November 27 and December 3, for his attempt to bomb the opposition rally in 2018, confirmed the regime’s terrorism recognizes no boundaries.

According to the Belgian prosecutors and based on the evidence, the main target of this bombing was the opposition leader, Mrs. Maryam Rajavi. This event was also attended by hundreds of American and European personalities and lawmakers, along with tens of thousands of Iranians expatriates and European citizens.

Assadi had used his diplomatic cover to transfer 500 grams of TATP explosives by using a commercial airliner to Vienna, where he was stationed as the third secretary of Iran’s embassy. While he was caught red-handed with evidence in his car, including his personal notebook full of instructions for his operatives, Assadi has been claiming he has diplomatic immunity and has refused to cooperate with Belgian authorities.

In March, according to Reuters, he went as far as threatening Belgian authorities with terrorist attacks by the regime’s terrorist proxy groups in the region.

“Assadi told police that armed groups in Iraq, Lebanon, Yemen and Syria, as well as in Iran, were interested in the outcome of his case and would be ‘watching from the sidelines to see if Belgium would support them or not,’” Reuters wrote.

According to Belgian prosecutors, Assadi was operating on behalf of the regime’s highest authorities.

Assadi’s position as a so-called “diplomat” and an operative of Iran’s Ministry of Intelligence and Security (MOIS), along with his bold move to threaten Belgian authorities, shows Assadi was not a “rogue element.”

The regime’s top officials, particularly Foreign Minister Mohammad Javad Zarif, were involved, facilitating, and guiding this terrorist operation. Zarif and his ministry had a significant role in both facilitating what could have been the EU’s largest terrorist operation and whitewashing it after it had happened.

While his diplomat was arrested attempting to commit the crime, Zarif called this operation “a false flag operation,” indicating he already had an alibi and excuse to whitewash the regime’s hands.

EU Foreign Ministers will meet on January 25, days after the court in Antwerp, Belgium is set to announce its decision on the 2018 terror plot.

EU leaders have this opportunity to set a precedent by holding the regime to account for his terrorism. The EU should expel the regime’s agents from European soil and shut down Tehran’s embassies in all EU member states. Additionally, they should designate the IRGC, MOIS and the mullahs’ terrorist proxies in Iraq, Syria, Lebanon, and Yemen as terrorist groups.

The EU should sanction the regime’s officials involved in terrorism, most importantly the regime’s chief apologist Zarif.

By holding the regime to account, the EU could once and for all stop the regime’s terrorism.

On Tuesday, an Iranian American by the name of Kaveh Lotfolah Afrasiabi made his first appearance in a US federal court, about 13 years...
Read more
Iran News Now

The Revolutionary Guards (IRGC) unveiled its new missiles and drones during its recent maneuver in central Iran on Friday. Unveiling ballistic missiles and suicide...
Read more