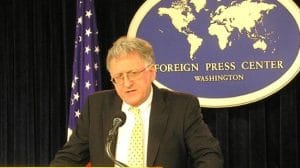 On November 27, 2020, four Iranian terrorist operatives will go on trial in Antwerp, Belgium. Among them is Iran’s regime diplomat-terrorist Assdollah Assadi. The following is the statement of Ambassador Robert Joseph, former US Under Secretary of State for Arms Control and International Security.

I, Robert Joseph, former Under Secretary of State for Arms Control and International Security, provide the following statement for consideration in the ongoing judicial proceedings in Belgium to prosecute those allegedly involved in the attempted terrorist attack on the Free Iran gathering on June 30, 2018, near Paris.
While serving as the principal official in the State Department responsible for nonproliferation, I followed events in Iran closely. I found it impossible to separate the regime’s quest for nuclear weapons from the domestic repression of its own citizens, as both represent a threat to international peace and security. For many years, I have been alarmed by the gross violations of human rights in Iran, including the brutal, often deadly, treatment of those in Iran who seek democracy and freedom from the religious dictatorship. I have been equally alarmed by the Iranian regime’s use of terrorism against Iranian dissidents abroad and as a tool to achieve its political objectives.
Even knowing the nature of the regime beforehand, it was nevertheless shocking to learn of the attempted terrorist bombing at the 2018 gathering. I would never have thought that a peaceful event in France with tens of thousands of men, women, and children in attendance would be a target for terrorism. Any explosion in the hall, or even outside where large numbers of attendees watched the proceedings, would have resulted in huge casualties, likely hundreds killed and many, many more wounded and permanently disabled. Learning of the planned terrorist attack reinforced my view that the Iranian regime is not only the number one violator of human rights at home but also the number one state sponsor of terrorism.
On a personal level, I have attended the annual meetings of the Iranian opposition for nearly a decade, at times with my wife. At the 2018 event, I recall vividly the enormous exhibition hall with a large VIP section where I was sitting with hundreds of parliamentarians from around the world, renowned human rights activists, and other accomplished guests from every professional field. Clearly, the main target was Mrs. Rajavi, head of the National Council of Resistance of Iran (NCRI) and sponsor of the meeting. Like the others in my section, I was sitting near Mrs. Rajavi. But there were also thousands of participants within a short distance from the VIP section. The death toll and casualties would have been in the hundreds if not more.
I am a long-time supporter of the NCRI, whose main component is the Mujahedin-e Khalq (MEK). Inside and outside of Iran, the NCRI and MEK have been prime targets of the regime’s terrorism. The MEK is the main victim of human rights violations inside Iran. The regime has executed over 100,000 of its members and adherents because of their quest to establish a democratic Iran. In the summer of 1988 alone, in a matter of few months, 30,000 MEK supporters were murdered following a religious fatwa by Ayatollah Khomeini. Outside of Iran, the MEK leadership has been blatantly and repeatedly targeted for assassination in multiple countries in Europe and elsewhere.
The NCRI and the MEK are also the principal victims of the regime’s disinformation campaign. Literally, for decades, the regime has disseminated false information to the press and to the intelligence and security services of western countries, accusing the MEK of terrorism. Based on such falsehoods, Iran would then ask western governments to label the MEK as a terrorist organization. Regrettably, some governments, under the illusion that such a concession might encourage the regime to change its behavior, wrongly designated the MEK as a terrorist organization. However, courts in the United States, the EU Court of Justice, and the UK special court on terrorism have ruled in favor of the MEK. Subsequently, the MEK was fully vindicated and removed from all blacklists.
Today, the NCRI and MEK have been recognized as democratic and legitimate organizations representing the desire of the Iranian people for freedom and democracy. NCRI coalitions encompass a broad base of representatives of various political persuasions and ethnicities. The NCRI platform advocates a democratic republic where the people of Iran have the opportunity to elect their own representatives, gender equality, separation of religion and state, recognition of the rights of minorities and ethnicities, and a non-nuclear Iran.
Based on my knowledge of the involvement of the regime in terrorism and on available information, in this case, it is clear to me that the planned attack was not an isolated act by a rogue element within the Iranian government. Rather, it was a well-planned terrorist act, using diplomatic privileges for criminal purposes.
Independent of the political aspects, I have joined as a Civil Party, because I was present at the time and location of the attempted terrorist attack. I was a potential target and, had the attack succeeded, it could have had a profound impact on my family. In addition, targeting such a large crowd to pursue the criminal objective of eliminating the leader of a democratic opposition, is an abhorrent crime that cannot be tolerated by any civilized government. I feel strongly that those who were involved must be brought to justice. We must uphold the values we espouse. If the leaders of free societies fail to hold the perpetrators responsible, we will only encourage more attacks and be complicit in them.