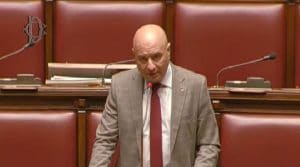 On November 27, 2020, four Iranian terrorist operatives will go on trial in Antwerp, Belgium. Among them is Iran’s regime diplomat-terrorist Assdollah Assadi. The following is the statement of Mr. Antonio Tasso, a Member of the Italian Parliament.

I, undersigned Antonio Tasso, a Member of the Italian Parliament, participated in the Grand Gathering of the National Council of Resistance of Iran on June 30, 2018, at the Villepinte Hall in Paris with a large delegation of Italian political figures. I want to ask to be registered as a civil party against Assadollah Asadi and his accomplices, currently pending in the Belgian Antwerp Criminal Court. I knew that the dictatorial religious regime in power in Iran is the leading country in the world by the number of executions. I knew that this regime had executed tens of thousands of freedom activists in Iran over the past forty years, most of whom were members and supporters of the People’s Mojahedin of Iran (MEK). I knew that in 1988, immediately after the end of the Iran-Iraq war, Khomeini issued a fatwa that executed most of the Mojahedin in prisons. Most of those who carried out that sentence currently occupy the highest political and judicial positions in the country. In less than three months, more than 30,000 political prisoners, more than 90% of whom were MEK members, were executed. Therefore, they committed the most massive political genocide since World War II. Ten months ago, in November last year, following a peaceful national uprising of the Iranian people, 1,500 defenseless demonstrators were killed within three days on the direct order of the supreme leader Ali Khamenei, 12,000 others were arrested, undergoing torture.
We know that this regime has so far been condemned 65 times by United Nations bodies for its crimes.

But what I didn’t know is that the top officials of the Iranian regime had decided to attack the demonstration in which tens of thousands of women, men, elderly, young people, and children participated—a peaceful gathering in Paris to express their own idea. Besides, hundreds of political figures and elected representatives of different countries, including myself, were present to support a free Iran. Whenever I think about such an attack, if it hadn’t been foiled, a great tragedy would have happened. I tremble because the victims would not have been hundreds but thousands.

The question is, how did the regime in power in Iran have this inhuman courage? All but, in particular, the European states must think twice about this question. Undoubtedly, the criminal advance of the regime, even in Europe, derives above all from the ferocious dictatorship’s brutal nature. But that’s not all the reason. One part goes back to the destructive policy we Europeans have been pursuing for years in favor of the regime, and in the face of its crimes in Iran and outside the country, we have adopted a policy of appeasement.

Let me give an example from my country. Besides mass killings of freedom activists in Iran, the regime has committed a wave of large-scale terrorism around the world, especially against its opponents in various countries, including Europe (Germany, France, Great Britain, Switzerland, Italy, Austria, the Netherlands), United States of America and Iran’s neighboring countries in the Middle East (Turkey, Iraq, Pakistan, UAE, etc.).

I would like to remember Hossein Naghdi, killed on March 16, 1993, in Rome by the terrorists of the Iranian regime. Hossein Naghdi was a young diplomat who, after the fall of the Shah, worked as the charge d’affaires in the embassy of his country in Rome. He resigned in 1982 when the regime’s wave of mass executions of young Iranians began, and he joined the National Council of Resistance of Iran and represented it up to death. Regarding his very significant role in Italy, let me tell you a part of the ruling of the criminal tribune of Italy:
“Naghdi’s murder should be considered as a political murder, which has been decided in the Iranian government’s circles in the framework of a larger project aimed at destroying resistance centers abroad. Due to his political activity in Italy, due to his ability to establish a relationship with the highest levels of the political circle in Italy, due to the undeniable human abilities, and for the … unceasing struggle with a clear and obvious face against the regime which he initially had embraced. The decision to kill [Naghdi] was taken by a group of Tehran’s political and religious leaders and assigned to the group that entered Italy specifically for this purpose…
In light of these indisputable facts, confirmed not only by many documents of the international press presented by the civil party but it is cited by “extensive” sources (available to all) as cited by Messina [Chief investigative officer of the Carabinieri] in his statements, it can be understood that the assassination of Naghdi was a goal to extinguish a prominent resistance member. A man able to centralize a network of international relations in support of his struggle, a proud opponent who did not forgive the errors of the Tehran regime and enjoyed the unequivocal admiration and appreciation of the members of the Italian political world … ”
(Extract from the ruling of the Italian Criminal Court issued on December 13, 2006, about the assassination of Mohammad Hossein Naghdi, representative of the National Council of Resistance of Iran in Italy).

But how did the Iranian regime commit such crimes and then escape punishment and responsibility? By using government facilities and especially under diplomatic cover.
The commander of the Naghdi assassination commando, based on the latest investigations by the Italian police and information from within the Iranian regime, was a person nicknamed Amir Mansour Bozorgian. The latter entered Italy with the same name and a diplomatic passport. After committing this crime, he managed to flee our country. Investigations by the Iranian Resistance showed that the man was a Revolutionary Guards general named Ghafoor Darjazi who had managed to hide. Two years ago, it was discovered that this person changed his name to “Engineer Mostafa Modabber” and is now the manager of the company “Saipa”, which also has a football team responsible for constructing Iranian sports stadiums!

My expectation from the court is that they will show no mercy to these conspirators, so such crimes are not repeated. The court must tell the truth as it was.
It must be said that these crimes have been committed in recent years, and the reason was that the Iranian people and their representatives in the National Council of Resistance want to end the dictatorship. It must be said that the highest level of leadership of the Iranian regime has decided, organized, and commanded this crime.