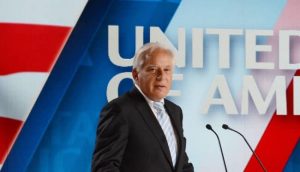 On November 27, 2020, four Iranian terrorist operatives will go on trial in Antwerp, Belgium. Among them is Iran’s regime diplomat-terrorist Assdollah Assadi. The following is the statement of Mr. Robert Torricelli, former Senator from New Jersey.

I, Robert Torricelli, joined as Civil Party to the judicial proceedings related to the terrorist plot against the Free Iran rally on June 30, 2018, in Villepinte, in the suburb of Paris, for the following reasons:

1. I was one among many international dignitaries who attended the Free Iran rally and spoke there. Tens of thousands participated in the gathering.

2. I was sitting in the VIP section, not far from Mrs. Maryam Rajavi, who was the prime target of the terrorist plot. Therefore, I was certainly a potential target and as such I feel very strongly in pursuing this case until justice is done

3. While I have been aware of the terrorist nature of the Iranian regime, I never thought that they would try blowing up a huge gathering with tens of thousands of participants including high profile international dignitaries in Europe. Had they succeeded, I have no doubt that at least hundreds would have been killed and many more injured. It would have certainly been the biggest terrorist attack in Europe

4. I have had the chance to see the file prepared by the investigative judge. There is no doubt that the terrorist plot was decided and planned at the highest level of the Iranian regime. This is a case of state terrorism, where diplomatic privileges have been used to facilitate a terrorist act in European soil. The fact that one of the defendant, Assadollah Assadi allows himself to threaten Belgium with terrorist attack in order to stop the investigation or talk about consequences if he is convicted further illustrate the role of the Iranian regime.

7. During the 30 years of my involvement I have met on several occasions with the NCRI leadership as well as the MEK/PMOI leadership and rank and file. So, I am very familiar with the history of the organization and its struggle to establish freedom and democracy in Iran, which in my view it is in the interest of world peace and security.

8. Members of NCRI and MEK/PMOI have been targets of Iranian regime sponsored terrorism. Dr. Kazem Rajavi, NCRI representative in Switzerland was assassinated by terrorist dispatched from Tehran. Thirteen Iranian agents using “Service Passport” were involved, all of whom left the country back to Iran a few hours after the assassination. The investigative Swiss Judge issue arrest warren for Ali Fellahin in 2006, then Minister of Intelligence in relation to this assassination.

9. The NCRI representative in Italy was also gunned down in 1993 in Rome. He was a former Iranian diplomat who had defected the regime and joined the NCRI.

10. Zahra Rajabi, from the MEK/PMOI leadership was assassinated in Turkey. An Iranian agent Reza Barzegar Massoumi was arrested and convicted to 33 years and four months imprisonment for complicity in the murder. Ms. Rajabi had gone to Turkey to help Iranian refugees there. Similar to the current case in Belgium, he has portrayed himself as a supporter of the MEK/PMOI and established contact with the MEK/PMOI supporters in Turkey. He guided the assassins to where she was staying.

11. Ali Akbar Ghorbani, a MEK/PMOI member was kidnapped in turkey in 1993. Six month later his mutilated body was found in the suburb of Istanbul. Terrorist connected with the Iranian regime had kidnapped and then killed him.

12. The attempted terrorist murder in June 30, 2018 in Villepinte has affected my life. The possibility of being the target of the Iranian regime because of my involvement with the movement is no longer a theoretical issue but had it not been for the great work done by the police and other relevant institutions in Europe, many of us could have been the target of that plot.