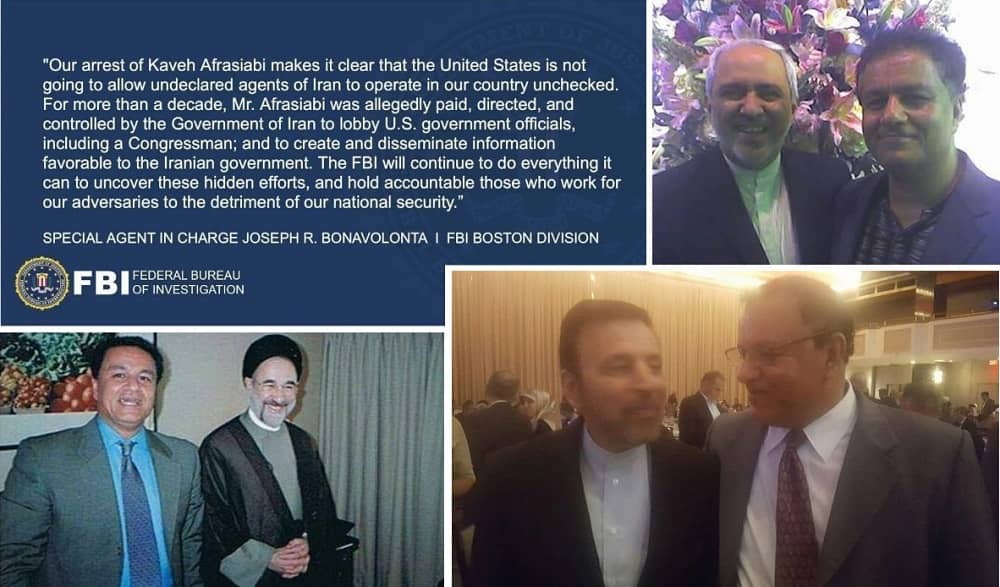 On Tuesday, an Iranian American by the name of Kaveh Lotfolah Afrasiabi made his first appearance in a US federal court, about 13 years after he first began taking payments from the Iranian regime while presenting himself to policymakers and journalists as an independent expert on foreign relations and political science. Court documents reveal that he was paid at least 265,000 dollars for his service to Iran’s theocratic dictatorship, before finally being charged for extensive violation of the Foreign Agents Registration Act.

Afrasiabi, who holds a PhD, is by no means the only Western-educated asset to successfully lobby for years on behalf of the Iranian regime. While it is impossible to say whether his writings or his appeals to lawmakers directly influenced US policy, there is no denying that he was frequently given attention and legitimacy while carrying water for Iranian intelligence. In 2009, he even assisted a member of the US Congress in drafting a letter to then-President Barack Obama which expressed support for a fuel swap agreement that Tehran itself had proposed.

That fact alone should be recognized as a sign of how deeply Iranian assets have managed to penetrate into Western policy circles and the media landscape. And this in turn should raise alarms among American and European politicians and news outlets, prompting them to undertake more extensive vetting of anyone who promotes policies or narratives that seem to closely overlap with those favored by the Iranian regime.

That vetting cannot be merely superficial. If a suspected Iranian asset has made separate statements that are critical of Iranian human rights violations or other malign activities, it is no proof that they aren’t dedicated to the mission of promoting Western policies that are more favorable to Tehran. This defense was attempted by Trita Parsi, the founder of the National Iranian American Council (NIAC), in a defamation suit against those who accused the organization of allegiance to the Iranian regime, but was rejected by district court judge John Bates.

“Even a moderately competent agent of the Iranian regime would at times take pains to distance themselves from some policies of the regime,” Bates explained in the context of his decision to reject Parsi’s defamation claims. He then went on to add that even if unproven, the allegations of NIAC were well-founded on the basis of the “overwhelming” pattern of political alignment between the Iranian regime and the supposedly self-funded American NGO.

The source of NIAC’s funding has never been credibly identified, and Parsi himself was compelled by the lawsuit to acknowledge that initial claims regarding the existence of over 4,000 donor-members were erroneous. NIAC’s ongoing advocacy for pro-Iranian positions has only cast more suspicion on the organization over the past decade, yet it has been permitted to continue lobbying openly throughout that time, and neither Parsi nor any other NIAC affiliate has been charged with FARA violations or made to register as a foreign agent.

One might hope that the inherent danger of this situation would become more obvious in the wake of Afrasiabi’s arraignment, especially as more information comes out regarding the variety and volume of his published writings and the extent to which Afrasiabi seemed to collaborate with Parsi, and others. The two have been given side-by-side bylines in publications like the Washington Report on Middle Eastern Affairs, where they argued against the US administration’s “maximum pressure” strategy and urged the nations of Europe to compensate for it by defying US sanctions and providing the Iranian regime with additional concessions in order to buy its renewed participation in the 2015 Iran nuclear deal.

Of course, many serious critics of the Iranian regime have been arguing for closer scrutiny of the mission and loyalty of groups like NIAC since long before Afrasiabi’s arrest. Last year, Senators Mike Braun, Ted Cruz, and Tom Cotton wrote to the Attorney General’s office urging a formal investigation into the Iran lobby. The letter highlighted a number of specific examples of NIAC downplaying Tehran culpability for its own malign behaviors and amplifying Iranian talking points that described the US as being at fault for crises such as militant attacks on the American embassy in Baghdad.

“NIAC’s innocuous public branding masks troubling behavior,” the senators said. And according to Iranian pro-democracy dissidents, that troubling behavior has been emulated by countless other lobbyists over many years. “Unfortunately, for the past three decades, the Iranian regime has been running an extensive network of agents and operatives, many of them US persons, in clear violation of American law,” said Alireza Jafarzadeh, the deputy director of the National Council of Resistance of Iran’s Washington office, in response to news of the Afrasiabi arrest. 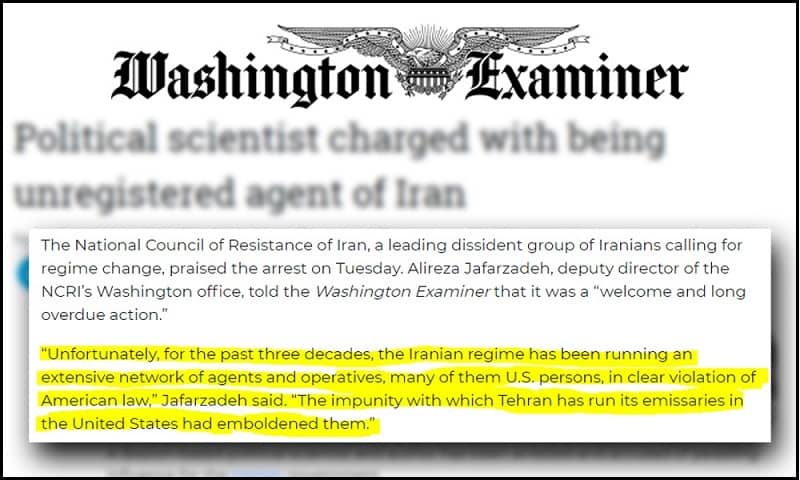 Jafarzadeh went on to complain that figures like Kaveh Afrasiabi and Trita Parsi have been given far too much leeway in their dealings with Western policymakers and media outlets, and that the resulting “impunity” has “emboldened” the Iranian regime in running its assets on Western soil. This arguably has implications not only for the quality of information regarding Iranian affairs, but also for the security environment in the US and Europe.

As recently as 2018, two longtime Iranian-Belgian dual citizens and a high-ranking Iranian diplomat were thwarted in an attempt to set off explosives at the NCRI’s annual gathering of Iranian expatriates near Paris. In announcing the arrest of that diplomat, a spokesperson for Belgian law enforcement seemed to highlight the situation of Iran’s impunity, noting that the vast majority of Iranian consular officials are actually employees of the Iranian secret service, yet continue to operate virtually unmolested within European territory.

The Iranian diplomat involved in the 2018 plot, Assadollah Assadi, is facing imminent sentencing by a Belgian federal court. The trial schedule and sentencing deadline for Kaveh Afrasiabi remain to be determined, but may not be far behind. Although the two incidents are very different, they both reflect an underlying lack of appropriate scrutiny for likely Iranian assets who operate openly in the West. The outcome of both those cases should therefore go far beyond punishment for the defendants themselves. The US and Europe must raise their overall level of awareness regarding the threats of clandestine influence by the Iranian regime.

In the near term, the Afrasiabi case should motivate a more serious response to anyone who raises alarms over similar lobbying efforts by NIAC, Parsi, or any similar organization or individual. And over the long term, that case should also lead to more comprehensive challenges to the narratives that those organizations and individuals have been sowing in Western policy discussions for the past 30 years.

It is primarily thanks to individuals like Afrasiabi that some Western governments tend to operate on the assumption that the Iranian regime is stable, powerful, and free from serious domestic threats to the theocratic system. That assumption began to lose support in January 2018 when the Iranian people staged the first of three anti-government uprisings under the leadership of the NCRI’s main constituent group, the People’s Mojahedin Organization of Iran (PMOI-MEK). But it has still been clinging to life as some Western policymakers and news outlets have continued to lend their ear to figures like Trita Parsi who insist, quite absurdly, that support for such pro-democracy movements would be the greatest threat to the illusory promise of internal reform of the Iranian regime.