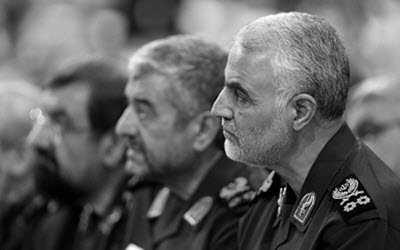 They say old habits die hard. In the case of the Islamic Revolutionary Guard Corps (IRGC) is certainly true. There are two seemingly unrelated events in the past few days; one renewing Khomeini’s fatwa (religious decree) for the head of Salman Rushdie dated back to February 1989 which forced the writer in to hiding fearing his life. The prize was raised just recently to 2.8 billion Tomans (roughly $300000) reminding everyone that IRGC means business. Ironically, the news was first published by Tasnim News Agency close to Quds Force (The Quds Force is a special forces unit of IRGC responsible for their extraterritorial operations. The Quds Force reports directly to the Supreme Leader of Iranian regime, Ali Khamenei. Its commander is Major General Qasem Soleimani). Tasnim also repeated the famous quotation from Khomeini: “I am afraid that in ten years time this decree would be set aside for diplomatic concerns”. The fatwa at the time created a fury around the world and some publisher of Rushdie’s book were subject of assassination attempts carried out mostly by fundamentals elements brained washed by Khomeini’s smoke screen to hide receiving a devastating final blow in the losing Iran-Iraq war.

The second was a rear interview aired on the Iranian regime’s state run TV with Anis Al-Naqqash, a well know figure and professional terrorist many believed to have been one of Lebanese Hizbullah’s masterminds. He famously bragged: “Islam Is one of the greatest advocates of violence, when violence is warranted”. It is also believed that he trained Imad Mughniyah, the former military commander of the Lebanese Hezbollah militia according to Al- Arabiya English language on February 18, 2017.

Anis Al-Naggash was on an assassination mission order by Tehran to kill Shah’s last Prime Minister, Shapour Bakhtiar in Paris in July 1980. The mission failed and Al- Naggash landed in a French jail for the next decade.

State TV’s talk show host did not miss the opportunity to make sure that the viewers fully get the scale of the guest’s fame and said: “A year after the Iranian revolution, Al-Naqqash went to France on a mission to assassinate Shapour Bakhtiar, the Prime Minister under the Shah. The operation did not succeed and he was arrested and imprisoned for several years”. Al-Naggash was finally released in 1990 and returned to Iran to receive a hero’s welcome at Tehran airport from high officials of the regime.

What Al-Naggash did not succeed to accomplish was just the start in a series of assassination attempts planned and carried out by the IRGC and its Quds Force aboard. Paradoxically, most of them were executed under the so-called moderate president Akbar Hashemi Rafsanjani.

These two incidents have one thing in common a pattern followed by IRGC since its inception; absolute suppression of citizens in Iran coupled with callous assassination tactics designed and executed by hired guns to intimidate dissidents abroad.

This force was created by Khomeini to defend his regime at all costs. Before the emergence of ISIS which turned a bloody page in the modern history, the Iranian people paid the price of IRGC’s deeds single handed. In the 80s and 90s, not many people paid enough attention to the fact that Islamic fundamentalism is the near future’s Global Threat. It is the same no matter what form or shape presents itself. Brutality, curtly, unique tactics in terrorizing and murdering innocent people are common tools which ISIS and IRGC use. What logic stands in the way of landing IRGC on the US FTO list? It would be naive to think that one day IRGC changes its behavior. A leopard can’t change its spots!

Reza Shafa is an expert on the Iranian regime’s Intelligence networks, both in Iran and abroad. He has done extensive research on Iranian Ministry of Information and Security (MOIS) also known as VEVAK, Intelligence Office of Islamic Revolutionary Guard Corps (IRGC), and Quds Force among others. He contributed to NCRI website.