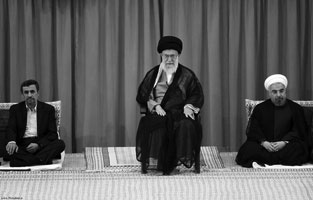 The Iranian regime is using front companies and secretive unofficial channels to bypass sanctions and acquire materials for arms manufacture and other industries, according to leaked South African intelligence documents.

The revelations by Middle East news channel Al-Jazeera expose how Tehran is seeking to dodge trade restrictions imposed by the international community in response to the regime’s appalling human rights record, sponsorship of terrorism and quest for a nuclear bomb.

It even names the gardeners and drivers at Iran’s embassy, and the intricate network of individuals, businesses and cultural groups which it says are being used by Tehran to pursue its interests and expand its influence.

A separate South African intelligence document tells how Iranian officials carried out a ‘clean-up’ of several diplomats at the Iranian embassy whose loyalty to President Mahmoud Ahmadinejad was questioned.

One Iranian diplomat had ‘a gambling problem’ and was being ‘closely watched’, the intelligence document said.

The official in charge of the ‘clean-up’ also planned to send this diplomat home but could not because of his ‘political contacts’, it added.

“It cites a ‘covert source’ who claims that on two occasions, then-President Thabo Mbeki had met with senior Iranian officials requesting help with their nuclear programme.

“A month after an initial September 2005 meeting, an Iranian delegation headed by a ‘Mr Rouhani’ – likely to be current Iranian President Hassan Rouhani who had stepped down as head of Iran’s Supreme National Security Council in August of that year – met Mbeki, according to the source.”

The intelligence documents seen by Al-Jazeera add: “The nature of the discussions was a request from the Iranian government to the SA Government to assist Iran with their nuclear program and to provide technical advice and technology.

“The advanced level of South Africa’s technologies in the aerospace industry, especially in the missile guidance field has increasingly become a focal point” of Iran, a South African spy commented.

“It is foreseen that these industries will be targeted for procurement processes.”

They were also said to have sought tools for cracking encryption codes and protecting their own secrets online, and the report said Iranian officials had discussions with managers of South Africa’s electronic interception facility, the National Communication Centre in 2005, according to Al-Jazeera.

Iranian delegations were also said to have visited several other technical facilities, including manufacturers of drones, electronic warfare systems and interception technologies, the TV channel said.

South African agents warned: “Cooperation between Iranian entities and the South African defence industry should be carefully considered. Especially in view of the risk of international sanctions against the industry when it becomes known that they are negotiating contracts on non-proliferation and arms controlled technologies with such a country.”

Another leaked document warned that British agents had also been monitoring and trying to police trade restrictions on Iran that the UK had been instrumental in establishing.

A cable from the UK’s Secret Intelligence Service warned its South African counterparts that a South African company was involved in ‘advanced” business dealings’ with an Iranian ‘front company’.

The 2009 cable warns the South Africans that the Iranian company was secretly ‘responsible for the production of missile launchers’ and ‘the development of rocket bodies’, but had gone to great lengths to pretend that it was a legitimate firm.

MI6 alleged that the front company was hiding the involvement of Tehran-based Shahid Bagheri Industrial Group, whose assets were frozen by the United Nations in 2006 due to its alleged role in Iran’s missile programme.

British intelligence feared the sale of the accessories and materials by the South African company could ‘significantly enhance Iran’s ability to produce ballistic missiles, including some which would be suitable for carrying nuclear warheads’.

MI6 explained that the companies had planned a business trip to Iran by a dual British-South African national, and asked the SSA to use export licensing laws to ‘prevent the proposed visits from going ahead’.

MI6 wrote: “We believe such action would be consistent with South Africa’s international obligations, as it would be with ours.”

Iran has also been using religious cultural affairs and the Persian carpet trade as ‘deep cover for intelligence activities’, the agents claim.

The agents also profile a number of carpet shops, publishers and other small businesses they believe have links to Iran’s intelligence agencies.

Intelligence documents also revealed: “Both the Ministries of Intelligence and the Revolutionary Committees make use of the diplomatic bag to send arms to the Iranian Embassies abroad. These arms are then stored in the Embassy with the full knowledge of the Ambassador.”

They then train these cells to strike ‘an identified target’, which the South Africans say are ‘usually American or Israeli’, the documents added.

Between 1989 and 2002, there were 24 assassinations successfully carried out by Iranian spies in Europe and Turkey, all with the explicit approval of Iran’s President and Supreme Leader, according to the document.