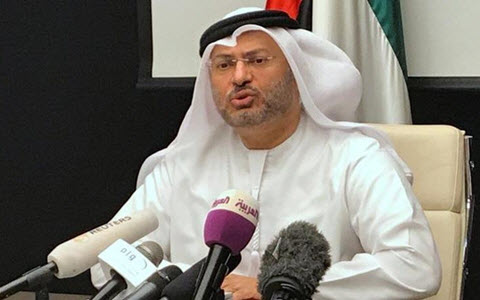 UAE Minister of State for Foreign Affairs Dr. Anwar Garqash said that “the failed Houthi attempt to target Riyadh with Iranian ballistic missiles is a dangerous development that puts priorities in their right place; we have many challenges ahead of us but the most important of which is the danger of the Iranian expansion.”

The UAE minister said in his tweets that: “The Houthi group is so close to becoming a new Hezbollah. The fact that Al Houthi militias refused a political solution during the previous period confirms that we can’t afford to be flexible with them. Only escalation will bring results.”

The UAE minister underlined that: “The ballistic Houthi Iranian attack on Riyadh makes the Iranian ballistic missile issue an urgent priority. We will not accept to live under risk of their program.”
Qarqash added, “In this context it is important to strengthen the unified Gulf position towards the Iranian threat and its Houthi agent; acting confused or neutral is not the time or place for this issue.”