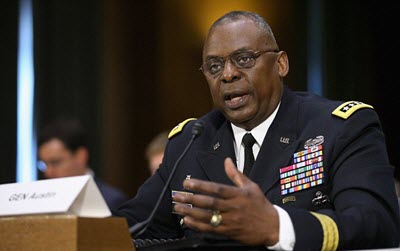 The top U.S. military commander overseeing the Middle East said Tuesday that despite the nuclear deal, Iran’s regime shows no signs of altering its destabilizing behavior, The Hill reported.

“There are a number of things that lead me to personally believe that, you know, their behavior is not — they haven’t changed any course yet,” said Army Gen. Lloyd Austin, commander of U.S. Central Command, at a Senate hearing.

Austin said he was concerned about Tehran’s continued testing of ballistic missiles, which the U.S. intelligence community believes is the Iranian regime’s preferred method for delivering a nuclear weapon.

“What I would say is that what we and the people in the region are concerned about is that they already have overmatch with the numbers of ballistic missiles,” Austin told the Senate Armed Services Committee.

“The people in the region, they remained concerned about [Iran’s] cyber capabilities, their ability to mine the straits,” he added. “And certainly the activity of their Quds forces … we see malign activity, not only throughout the region, but around the globe as well.”

“We’ve not yet seen any indication that they intend to pursue a different path. The fact remains that Iran today is a significant destabilizing force in the region.”

“Some of the behavior that we’ve seen from Iran of late is certainly not the behavior that you would expect to see from a nation that wants to be taken seriously as a respected member of the international community,” he said.

Austin also expressed concern about an “emerging strategic partnership” between Iran’s regime and Russia which are working together to bolster the Bashar al-Assad regime in Syria.

“What I worry about is [if] that relationship between Syria, Russia and Iran develops further, that it will present a problem for the region,” he said.

That cooperation is expanding to include the sale of high-end weapons, Austin said.

“We’ve seen recently [the sale of] high-end air defense capability from Russia to Iran and that’s a problem for everyone in the region,” Austin said.

“And also coastal defense cruise missiles. As that type of technology is — migrates from Russia to Iran, it’ll eventually wind up in the hands of Lebanese Hezbollah.”