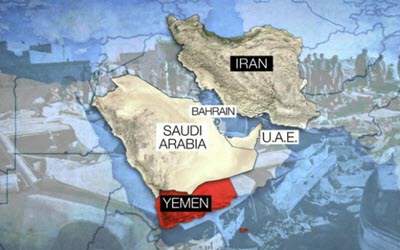 NCRI – The representative of Yemen in the Arab League, Riyadh al-Akbari, warned about the dangers of the Iranian regime’s meddling in the region and continuation of unrest and coup and the Houthi militants’ domination on government agencies in his country, particularly the risks related to international shipping lines and international peace and security in the region.

According to Saudi Arabia’s Okaz newspaper, “The representative of Yemen warned about the Iranian regime’s meddling in the internal affairs of his country and announced that the legitimate government of Yemen condemns illegal unilateral actions of conductors of coup (Houthis) backed by the Iranian regime. The latest action of these conductors of coup is forming a government unilaterally.”

In addition, the Arab Coalition spokesman, Major General Ahmad Asiri, warned about the consequences of long-range missiles in the hands of the Houthi militants and said: “The spread of this type of ballistic weapons is neither in favor of the regional countries nor the world, because it is likely that the Houthi militants’ weapons have spread and fallen into the hands of Hezbollah and Daesh terrorist militants as well as other terrorist groups.”

The Arab Coalition spokesman in his interview with Qatar’s Al-Sharq newspaper said: “The Iranian regime’s goal of supporting the Houthi militants by smuggling weapons is to prolong the war in Yemen and destroy the country… and the Iranian regime is a regime that is the source of terrorism.”