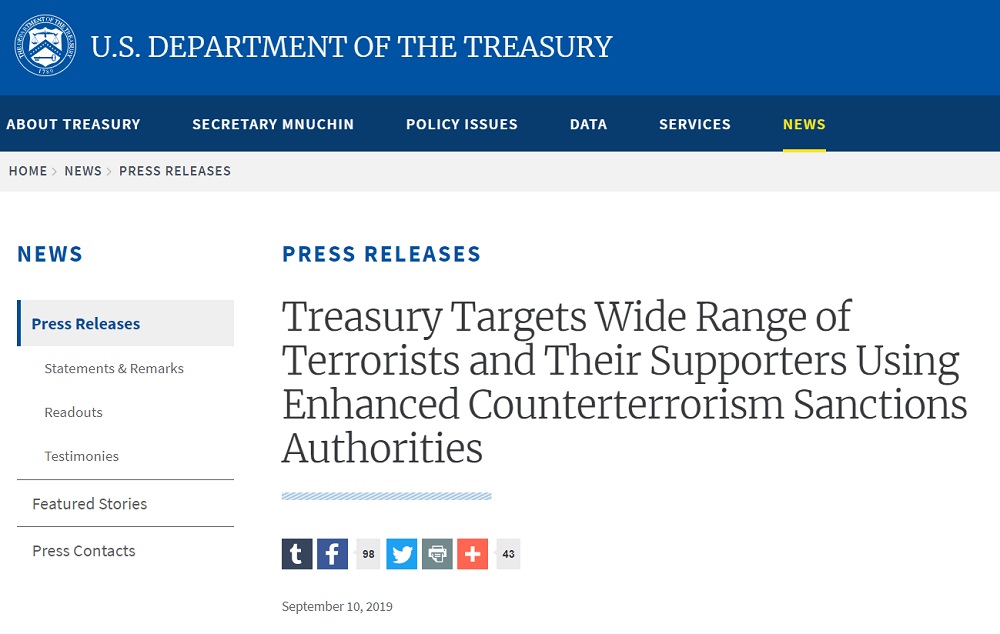 The United States announced new sanctions targeting a “wide range of terrorists and their supporters”, including the Iranian regime’s Islamic Revolutionary Guards Corps (IRGC) Quds Force, Hamas, al Qaeda, and the Islamic State, on Tuesday, which was the eve of the 18th anniversary of the September 11 attacks.

The U.S. Treasury Department’s Office of Foreign Assets Control (OFAC)  said that they were sanctioning 15 leaders, individuals, and entities in total, using new tools granted in an executive order recently updated by Donald Trump, which amounted to “some of the furthest reaching designations of terrorists and their supporters in the past 15 years”.

Treasury Secretary Steven Mnuchin said in the statement: “Since the horrific attacks of 9/11, the US government has refocused its counterterrorism efforts to constantly adapt to emerging threats. President Trump’s modernized counterterrorism Executive Order enhances the authorities we use to target the finances of terror groups and their leaders to ensure they are as robust as possible.”

He continued: “These new authorities will allow the U.S. Government to starve terrorists of resources they need to attack the United States and our allies and will hold foreign financial institutions who continue to do business with them accountable. These new tools aid our unrelenting efforts to cut off terrorists from their sources of support and deprive them of the funds required to carry out their destructive activities.  They serve as a powerful deterrent to radical terror groups and those seeking to aid their nefarious goals.”

It’s important to note that many of these terrorist groups are actually funded by Iran’s regime or have been supported by them.

These sanctions mean that any property the targets may have in the U.S. would be frozen and US persons would be banned from having business dealings with them.