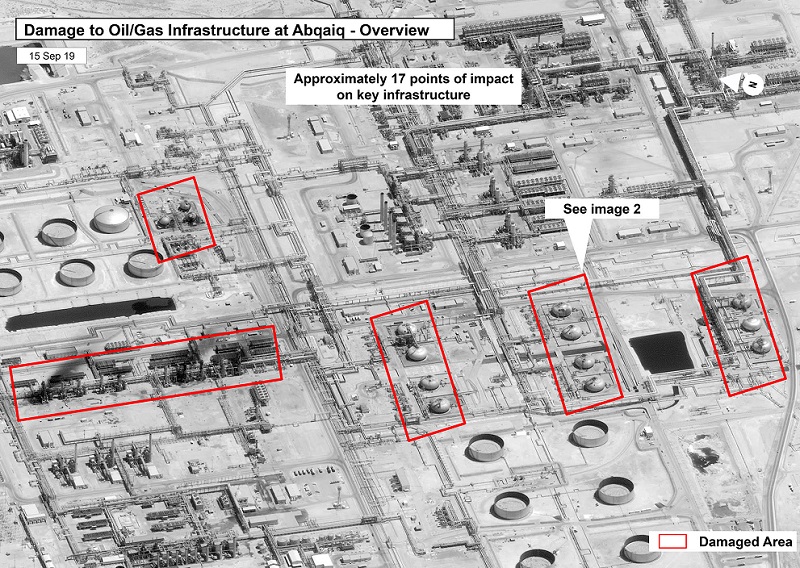 Reuters news agency published a special report this week on the Iranian regime's plot to attack Saudi Arabia's oil facilities - an attack which was described by Iranian opposition leader Maryam Rajavi as an "act of war."

The main topic that day in May: How to punish the United States for pulling out of a landmark nuclear treaty and re-imposing economic sanctions on Iran's regime, moves that have hit the regime hard.

The United States State Department designated the IRGC as a foreign terrorist organization in April 2019.

“It is time to take out our swords and teach them a lesson,” the commander said, according to four people familiar with the meeting.

Hard-liners in the meeting talked of attacking high-value targets, including American military bases.

Yet, what ultimately emerged was a plan that stopped short of direct confrontation that could trigger a devastating U.S. response. Iran opted instead to target oil installations of America’s ally, Saudi Arabia, a proposal discussed by top Iranian military officials in that May meeting and at least four that followed.

This account, described to Reuters by three officials familiar with the meetings and a fourth close to Iran’s decision making, is the first to describe the role of Iran’s leaders in plotting the Sept. 14 attack on Saudi Aramco, Saudi Arabia’s state-controlled oil company.

A senior Trump administration official did not directly comment on Reuters’ findings but said Tehran’s “behavior and its decades-long history of destructive attacks and support for terrorism are why Iran’s economy is in shambles.”

Yemen’s Iran-aligned Houthi rebels, at the center of a civil war against Saudi-backed forces, claimed responsibility for the assault on Saudi oil facilities. That declaration was rebuffed by U.S. and Saudi officials, who said the sophistication of the offensive pointed to Iran.

The 17-minute strike on two Aramco installations by 18 drones and three low-flying missiles revealed the vulnerability of the Saudi oil company, despite billions spent by the kingdom on security. Fires erupted at the company’s Khurais oil installation and at the Abqaiq oil processing facility, the world’s largest.

The assault prompted U.S. Secretary of State Mike Pompeo to accuse Iran of an “act of war.” In the aftermath, Tehran was hit with additional U.S. sanctions. The United States also launched cyberattacks against Iran, U.S. officials told Reuters.

The plan by Iranian military leaders to strike Saudi oil installations developed over several months, according to the official close to Iran’s decision making.

“Details were discussed thoroughly in at least five meetings and the final go-ahead was given” by early September, the official said.

All of those meetings took place at a secure location inside the southern Tehran compound, three of the officials told Reuters. They said Khamenei, the supreme leader, attended one of the gatherings at his residence, which is also inside that complex.

Other attendees at some of those meetings included Khamenei’s top military advisor, Yahya Rahim-Safavi, and a deputy of Qasem Soleimani, who heads the Revolutionary Guards’ foreign military and clandestine operations, the three officials said.

Among the possible targets initially discussed were a seaport in Saudi Arabia, an airport and U.S. military bases, the official close to Iran’s decision making said. The person would not provide additional details.

Those ideas were ultimately dismissed over concerns about mass casualties that could provoke fierce retaliation by the United States and embolden Israel, potentially pushing the region into war, the four people said.

The official close to Iran’s decision making said the group settled on the plan to attack Saudi Arabia’s oil installations because it could grab big headlines, inflict economic pain on an adversary and still deliver a strong message to Washington.

“Agreement on Aramco was almost reached unanimously,” the official said. “The idea was to display Iran’s deep access and military capabilities.”

U.S. Senator Martha McSally, an Air Force combat veteran and Republican lawmaker who was briefed by the U.S. and Saudi officials, and who visited Aramco’s Abqaiq facility days after the attack, said the perpetrators knew precisely where to strike to create as much damage as possible.

“It showed somebody who had a sophisticated understanding of facility operations like theirs, instead of just hitting things off of satellite photos,” she told Reuters. The drones and missiles, she added, “came from Iranian soil, from an Iranian base.”

A Middle East source, who was briefed by a country investigating the attack, said the launch site was the Ahvaz airbase in southwest Iran. That account matched those of three U.S. officials and two other people who spoke to Reuters: a Western intelligence official and a Western source based in the Middle East.

Rather than fly directly from Iran to Saudi Arabia over the Gulf, the missiles and drones took different, circuitous paths to the oil installations, part of Iran’s effort to mask its involvement, the people said.

Some of the craft flew over Iraq and Kuwait before landing in Saudi Arabia, according to the Western intelligence source, who said that trajectory provided Iran with plausible deniability.

“That wouldn’t have been the case if missiles and drones had been seen or heard flying into Saudi Arabia over the Gulf from a south flight path” from Iran, the person said.

Revolutionary Guards commanders briefed the supreme leader on the successful operation hours after the attack, according to the official close to the country’s decision making.

In one of the final meetings held ahead of the Saudi oil attack, another Revolutionary Guards commander was already looking ahead, according to the official close to Iran’s decision making who was briefed on that gathering.

“Rest assured Allah almighty will be with us,” the commander told senior security officials. “Start planning for the next one.”

Background on the Saudi oil attack

On September 30, 2019, the National Council of Resistance of Iran‘s U.S. Representative Office held a press conference at the National Press Club in Washington, exposing exclusive and top secret information sourced from inside the Iranian regime obtained by the People’s Mojahedin Organization of Iran (PMOI/MEK) detailing the missile and drone attack carried out by the Iranian regime against the oil facilities of Saudi Arabia in Abqaiq and Khurais on September 14, 2019.

Five facts you did not know about #Iran regime’s attack on #SaudiAramco installations.

(@NCRIUS revelation Based on #MEK sources inside Iran)#IranRegimeChange #FreeIran pic.twitter.com/7yygZIPdsF