Iran: A Letter by Female Political Prisoner: Protesting IRGC, Is Why I Am Imprisoned 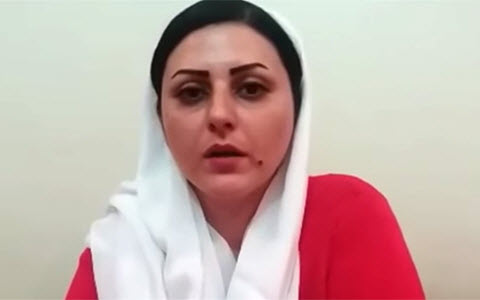 NCRI – Golrokh Iraei, a female political prisoner in a women’s ward of Evin Prison, wrote a letter last week in response to the exile of her husband, Arash Sadeqi, from Evin to Rajaei Shahr prison in Karaj.

In this letter, while noting the Iranian regime’s foreign minister, Mohammad Javad Zarif, who said that all Iranians are members of the Revolutionary Guards (IRGC), Golrokh Iraei wrote: “Contrary to his view, as an Iranian who devoted my peace and security and safety to the improvement of my country’s condition, not only I am not a member of IRGC, but also I am imprisoned because of the protest against the atmosphere of oppression created by the Revolutionary Guards in the society.

She regards her husband’s exile as an arbitrary act, committed by the head of the Evin prison with the intention of personal influence in this case.

Ms. Iraei adds that the heads of prisons repeatedly go to political prisoners’ files and in various ways disturb the political activists’ peace and calmness in the ward.

According to this political prisoner, exertion of influence in the cases of political prisoners and prisoners of conscience, also complicity and collusion with the interrogations and detaining authorities, as well as personal conflict and preparing lawsuit against prisoners who stand firm on their opinions point to this fact.

Part of the letter reads:

“My husband, Arash Sadeghi, was also the victim of the authorities’ malice in Evin prison, and he was sent to exile because he did not bow to their demands and did not accept whatever they wanted him to do.”

“The influence of prison authorities and their hostility to political prisoners is so much that the medical documents sent from the hospital are usually removed from the medical records of individuals and the history of their illness is totally sestroyed, and in general, and they completely deny the prisoner’s and prevents subsequent dispatch to hospitals and continuation of the treatment process.”

“Lack of timely medical attention ultimately leads to surgery and removal of an organ of their body.”

“The amount of budget received by the Prison Organization was reduced due to the inclusion in the sanctions list. Therefore, they leave most of their financial deficiencies and needs on the shoulder of the prisoners. Under any pretext, either in ordinary prisoners’ ward or political prisoners ward, instead of meeting their requirements, they say ‘We do not have funds,’ and the charity donations to the prisoners are confiscated and used for personal needs of the prison agents and cash donations and gifts are used for construction and repair of jail…”

Golrokh Ebrahimi Iraei and her husband Arash sadeghi were arrested on September 6, 2014 and subsequently sentenced to six years imprisonment by Branch 15 of Tehran’s Revolutionary Court on May 2015 on the charges of “insulting the scared and propaganda against the system”. The verdict was confirmed by Branch 15 of the Appeal Court without their presence.

Ms. Ebrahimi Iraei was then arrested again on October 24, 2017 by security agents abruptly without receiving a written notice and transferred to Evin prison for implementation of the 6-years prison term.

She has been accused of criticizing the medieval punishment of ‘stoning’ and considering stoning as sacred to blaspheme, according to an unpublished story.

Ms. Iraei, who suffered a severe illness earlier, went to jail without a full medical treatment, and now needs medical attention and treatment.

She is currently serving her sentence in women’s ward of Evin prison. Considering the reduction in her prison term on the occasion of the Nowruz (New Year), her sentence was reduced from 60 months to 30 months.

Previous article
Iran: Maryam Rajavi Hailed Protesters in Tehran and Other Cities, Called on All Iranians to Support Them
Next article
Deputy Commander-In-Chief of Iran Regime’s Army: Suleimani Is the Commander of Army and IRGC Troops in Syria and Iraq