Qalibaf: From the IRGC brigadier to the speaker of parliament

Iran’s regime parliament elected Mohammad Baqer Qalibaf as speaker last week. On Sunday, May 31, in his first speech to parliament, Qalibaf outlined a roadmap for the regime’s parliament.

Qalibaf emphasized on the regime’s policy in the continuation of terrorism and war in the region. He said the most important opportunity for the regime is the leadership of Ali Khamenei.

Ironically Qalibaf, whose extensive corruption has already been exposed, claimed to be fighting corruption and referred to “the disturbing corruption that has permeated various structures in the system.”

A brief look at Qalibaf’s corrupt background and the current critical situation of the regime sheds light on Khamenei’s roadmap for the regime. 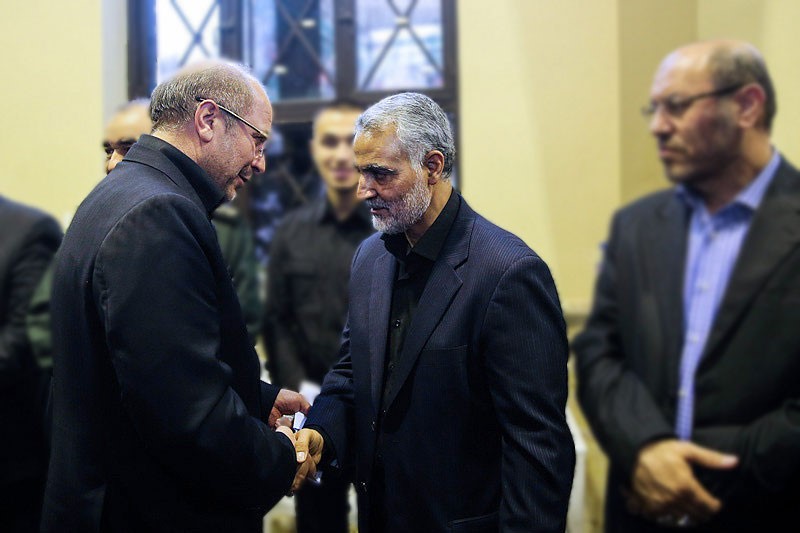 Mohammad Baqer Qalibaf was one of the commanders of the IRGC in the Iran-Iraq war, who joined the IRGC when he was less than 20 years old. It was not long before he became the commander of one of the main brigades in Khorasan Province, the Imam Reza Brigade.

Qalibaf’s next record in the mullahs’ regime demonstrates the depth of Khamenei’s trust in him.

He was appointed in the following three positions by Khamenei’s direct order:

In 2005, Qalibaf targeted to become the president for the first time but failed. However, due to the support of the IRGC, he was able to become the mayor of Tehran, replacing Mahmoud Ahmadinejad.

In fact, when the regime’s Supreme Leader was engineering the 2005 election, his main priority was to appoint Mahmoud Ahmadinejad for the presidency, so Qalibaf was replaced with Ahmadinejad in the Tehran municipality, which was not a small post.

A capable mayor or a corrupt commander?

Even leaving aside his military and suppressive background, and just the review of Qalibaf’s corruption and the circle around him is an important parameter for knowing Khamenei’s main figures in the IRGC and inside the regime.

Qalibaf’s 12-year presence as IRGC brigadier general with the above-mentioned military and security background in the Tehran municipality was unanticipated. However, due to the IRGC’s support and Khamenei’s in him, he was able to hold to that position to manage the metropolis of Tehran for 12 years.

But managing a metropolis requires skilled, educated, and experienced people. However, the commanders of the IRGC, including Qalibaf, had no experience in urban management. By contacting some people in the IRGC, as well as in the Anti-Trafficking Headquarters, he first gathered a network of corrupt people so that he could fully seize the capital’s assets and property.

A quick look at the articles published in the regime’s own publications shed some light on the issue of the real estate distribution by Qalibaf between networks of corrupt people.

On July 12, 2017, citing a “letter of the General Inspection Office,” the state-run Iran daily wrote, “Tehran Municipality has been accused of bribery, embezzlement, fraud and misusing public property amounting to 22 trillion tomans (around 6.2 billion dollars)… According to this letter, Tehran Municipality had given parcels of lands in the northern part of Tehran at a 50% discount to some of its managers, members of the city council, a member of parliament, an SSF official and several security officials. The letter from the General Inspection Office stated that these lands were priced at very low (unrealistic) and with a significant discount of at least 100 million to more than one billion tomans and also in the form of 600-month installments to the recipients. It has also been announced that 200 apartments, villas, and Tehran Municipality land had been sold for 2.2 trillion tomans less than the original price.”

On August 20, 2019, the state-run media, including the state-run Tabnak website revealed another part of Qalibaf’s theft and embezzlement, including “47 secret bank accounts, an unpaid Judiciary debt of 229.7 billion tomans to Tehran’s municipality, 497 billion tomans that the IRGC’s Cooperative Fund owed to the municipality, a payment of 60 billion tomans and the handover of 80,000 square meters of land to “Imam Reza” Foundation (owned by Qalibaf’s wife), and the purchase and sale of a Metro station.”

During Qalibaf’s tenure as Tehran’s mayor, the transfer of property at a quarter of the price to senior municipal officials and some members of the Tehran City Council, as well as IRGC commanders, and land acquisition in different parts of Tehran became routine.

In this regard, on August 31, 2016, Rahmatollah Hafezi, the head of the Health Commission of the Tehran City Council, told the Iranian Labor News Agency, ILNA, that the property handed over by Qalibaf, the mayor of Tehran, to managers and some members of the city council was priced at 25 percent of its real prices.

According to Hafezi, in addition to a 50 percent discount for the municipality, the official expert of the judiciary has not taken into account the price of the region and has priced up to 50 percent below the regional price.

Hafezi also reported receiving only 25 percent of the real estate price in cash, citing bank facilities with low profits was another municipal violation. According to him, bank facilities have been substantial, and up to 400 million tomans.

On October 23, 2016, the state-run Shargh newspaper published an article entitled untold stories of Imam Reza Charity, which caused a great deal of controversy. According to this report, Imam Reza Charity intended to establish a specialized neurology center in Tehran. “the Imam Reza charity was registered in March 2014 by Zahra Sadat Moshir, Qalibaf’s wife,” the report said.

“In April of last year (2015), concerning the ambiguities about the assistance of Tehran Municipality to the charity of Imam Reza, Mehdi Chamran, elaborated to reporters about paying two billion and 500 million tomans to the charity of Imam Reza. He said: ‘This issue is related to the charity that intends to construct the neurological hospital of Mr. Professor Samiei. A group of charities has been formed in the name of Imam Reza’s charity and some have gone to work as charities and have become members of the board of trustees of this charity and have collected more than 60 to 70 billion tomans in aid from the people. This has nothing to do with the people and the members of the city council.” 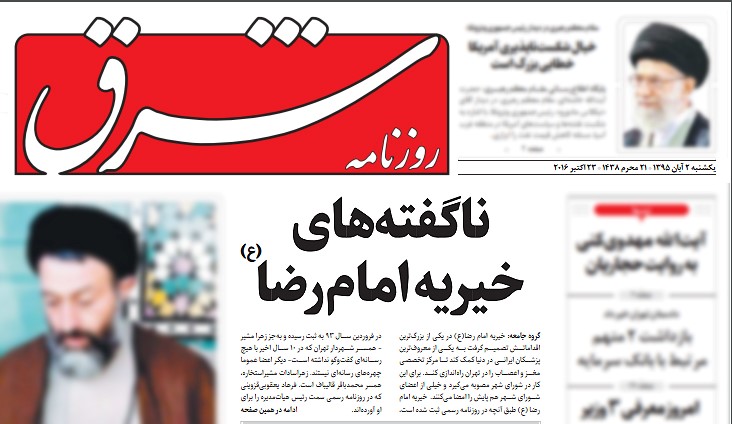 In fact, Mehdi Chamran, who was a member of the Tehran City Council at the time, was justifying the theft and embezzlement of large municipal budgets by Qalibaf and his wife and wanted to downplay his role.

Rahmatollah Hafezi, head of the Health, Environment and Urban Services Commission of the Tehran City Council, wrote the following tweet in protest of this process at the same time on October 21, 2016:

“The transfer of 49608 meters of land in District 22 to a charity where Qalibaf’s wife is a member of the board of trustees, at a price of 149 thousand tomans per square meter, is one of the examples of serving the martyrs!”

Hafizi’s mockery shows that the dimensions of allocating land to the project of building a hospital by Qalibaf’s wife’s charity were one of the biggest land grabbing of Tehran Municipality. 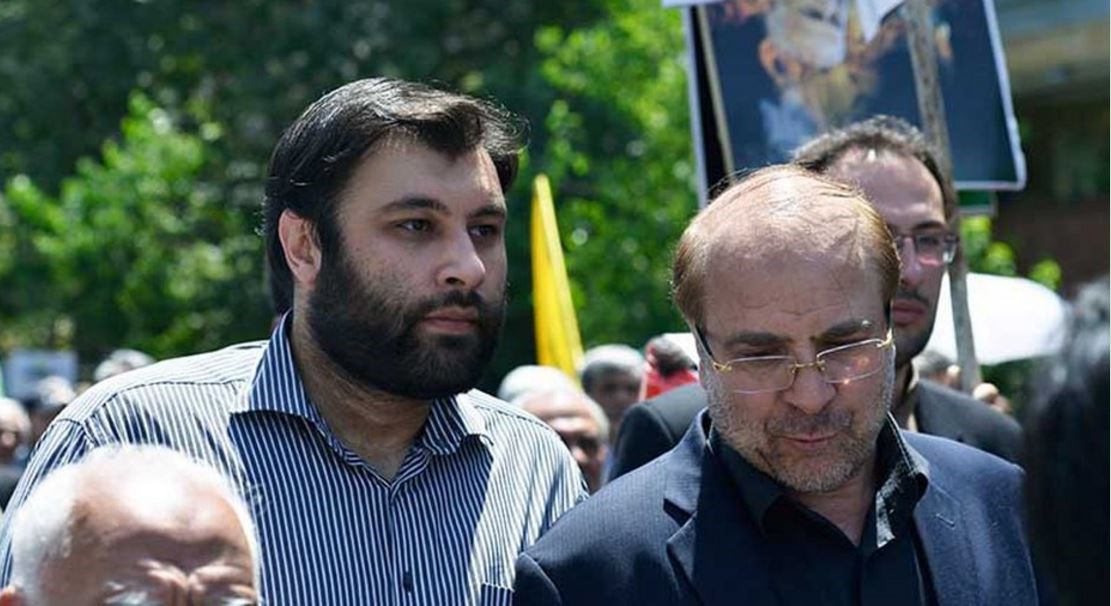 Elias Qalibaf is the eldest son of Baqer Qalibaf. Elias Qalibaf, with the help and guidance of his corrupt father, is also involved in large-scale financial projects and has already made astronomical profits.

Shams Al-Shumus Institute, owned by Elias Qalibaf, has been one of these projects.

The disclosure of the illegal financial relationship between the Tehran Municipality, the Foundation for the Mostazafan, and the Shams al-Shumus Institute were leaked in the state media when Qalibaf was assessing his candidacy for the presidency.

Shams Al-Shuaums Educational Institute belonging to Elias Qalibaf is a subsidiary of Imam Reza Charity, owned by Qalibaf’s wife. According to some documents disclosed in the state-run media, the Mostazafan Foundation had handed over 3 pieces of land with an area of ​​5,839 square meters in Saadat Abad, Tehran, to the Shams al-Shuaums Institute.

The Mostazafan Foundation is affiliated with Khamenei’s office and has signed a memorandum of understanding with the Tehran Municipality to transfer some properties to the municipality’s subsidiaries. The nature of these contracts and real estate transactions is largely secret, and the details are unknown, but the nature of these relationships shows how Khamenei’s office protects the interests of IRGC commanders and their families.

The story of 2005 file and drug traffickers

On May 13, 2017, during the third presidential election debate, Hassan Rouhani in the final part of his speech in a live televised debate by mentioning to one of the Qalibaf’s corruption cases said: ” I had the 2005 file of Mr. Qalibaf but I did not allow it to be published, and I argued with some in the secretariat so that this case would not be published during the election. If it were not because of my selflessness you wouldn’t be here today.”

One of the first major cases in which Qalibaf’s name appeared was the case of injecting money into election campaigns in 2005. In a report about this case, Zaytoun website wrote that this case was related to the major drug traffickers and fuel smugglers who donated money to Mohammad Baqer Qalibaf‘s headquarters in a deal to save the lives of their leaders.

In this regard, on May 2017 Abdullah Ramezanzadeh, a spokesman for Mohammad Khatami’s administration, who at the time had extensive information about the then commander of the police force, Qalibaf, by mentioning Qalibaf’s relations with the drug traffickers in Sistan and Baluchestan province tweeted the following in two tweets:

“Several 4 percent journalist friends should ask the names of Qalibaf’s main supporters in Sistan and Baluchestan in 2005. Also, ask about their jobs.”

“One of those 4 percent journalist friends should ask the reason for the arrest of Mr. Colonel’s brother when he was the commander of the police force.”

Ramezanzadeh’s reference to the word “4 percent” was, in fact, a reflection of Qalibaf’s position in the 2017 presidential campaign, in which he repeatedly said that there was a 4 percent liberal, profiteering, and capitalist pole in Iranian society, and another 96 percent ordinary people and the poor and needy.

This was, just an example of a power struggle within the regime that exposed Qalibaf.

In the case of Qalibaf and his corruption, more serious and major cases have leaked to the regime’s media, but it is clear why Khamenei’s choice for the speaker of the regime’s parliament is Qalibaf.

In a system engaged with corruption and organized crime, and the mafia gangs of military and security commanders occupying every corner of Iran’s cities and lands, it is only natural that such a corrupt commander could lead the parliament with this record.