The International Committee in Search of Justice (ISJ), which enjoys the support of over 4000 parliamentarians on both sides of the Atlantic, in a letter to Javaid Rehman, the United Nations Special Rapporteur on the Situation of Human Rights in Iran, expressed its concern over the regime’s recent mass arrest of youth and supporters of the People’s Mojahedin Organization of Iran (PMOI/MEK) amid the coronavirus outbreak. It warned that those detained are at risk of execution. The ISJ particularly warned about the fate of two elite students, Ali Younesi and Amir Hossain Moradi, along 18 other individuals, arrested in early May.

The ISJ also urged the UN to immediately intervene to prevent the regime from further violating human rights and secure the release of all political prisoners to avoid another humanitarian catastrophe.

The full text of this letter is below:

Office of the United Nations High Commissioner for Human Rights

We write to you on behalf of the International Committee ‘In Search of Justice’ (ISJ), a non-profit NGO registered in Brussels. Our members include many elected parliamentarians, former senior officials and other dignitaries, with an interest to promote human rights, freedom, democracy, peace and stability in Iran.

We have deep concerns that in the present circumstances Iran’s clerical regime is trying to abuse the Covid-19 pandemic to suppress the Iranian people even further. We have learnt through information coming from inside Iran that the security forces have started arresting many young activists who oppose the current situation in Iran and search for their human rights.

Almost three weeks ago, Iran’s judiciary announced the arrest of two elite university students from Sharif University of Technology after detaining them for 26 days. Amir Hossein Moradi disappeared on April 10, and Ali Younesi was brought home in the evening of the same day, with injuries and torture marks and was returned to the torture center together with his parents. Ali won the gold medal at the 12th International Olympiad on Astronomy and Astrophysics, held in China in 2018. Earlier, he had won the silver and gold medals of the National Astronomy Olympiad in 2016 and 2017. Amir Hossein also won the Olympiad silver medal in 2017.

Names and details of 18 other people who had been arrested but covered up by the regime were announced by the Iranian opposition on 5 May 2020.

According to reports we receive from inside Iran, in recent weeks, the regime has begun arresting and summoning large numbers of young activists not only in Tehran but extensively in more than 20 cities across Iran. These widespread and continuous arrests are occurring amid the Covid-19 pandemic where a lack of social communications makes it easier for the regime to perform them.

This has caused serious concerns about the fate of those arrested since torture and ill-treatment of political prisoners are well-known practices of the regime to get forced confessions and broadcast them, as was mentioned in your last report. In the past, significant numbers of prisoners have been murdered under torture in Iranian prisons. The situation of young female detainees is even worse as they are subject to double physical and psychological torture.

It is also necessary to keep in mind that amid COVID-19 Iranian prisoners are suffering severely from the lack of medical care and hygienic conditions, while prisoners’ health care is a state responsibility. Many prisoners have until now died in Iran’s prisons from Coronavirus and some who rebelled and ran from prison to escape the virus were re-arrested and brutally executed.

We appreciate that in your last report to the UN Human Rights Council in February-March 2020, you presented detailed information on the prison conditions and the breach of prisoners’ rights in Iran. However, the situation as described above is so harsh that it needs your continuous and closer attention. We all know that the Covid-19 pandemic has put life on hold across the world and humanity is suffering from a global crisis, but the fight for human rights never stops.

Therefore, while ISJ would be very happy to keep in contact with you on the subject of human rights violations in Iran, we urge you to take urgent action to bring to focus the worrying situation of those in prison and currently being arrested in Iran.

We believe that as it has been called for by Amnesty International and several other human rights organizations, due to the lack of accountability inside Iran, it is vital for the United Nations and its member states to deploy international delegations to visit Iran’s prisons and meet with political prisoners, and those recently arrested, especially women. To this end, we urge you as the UN Special Rapporteur on the situation of human rights in Iran, to take the necessary and immediate actions.

Spanish professor of atomic and nuclear physics. Vice-president of the European Parliament (1999-2014).

Chair ISJ Committee on the Protection of Political Freedoms in Iran

President of the European Parliament’s Delegation for Relations with Iraq (2009-14) and chairman of Friends of a Free Iran Intergroup (2004-14). 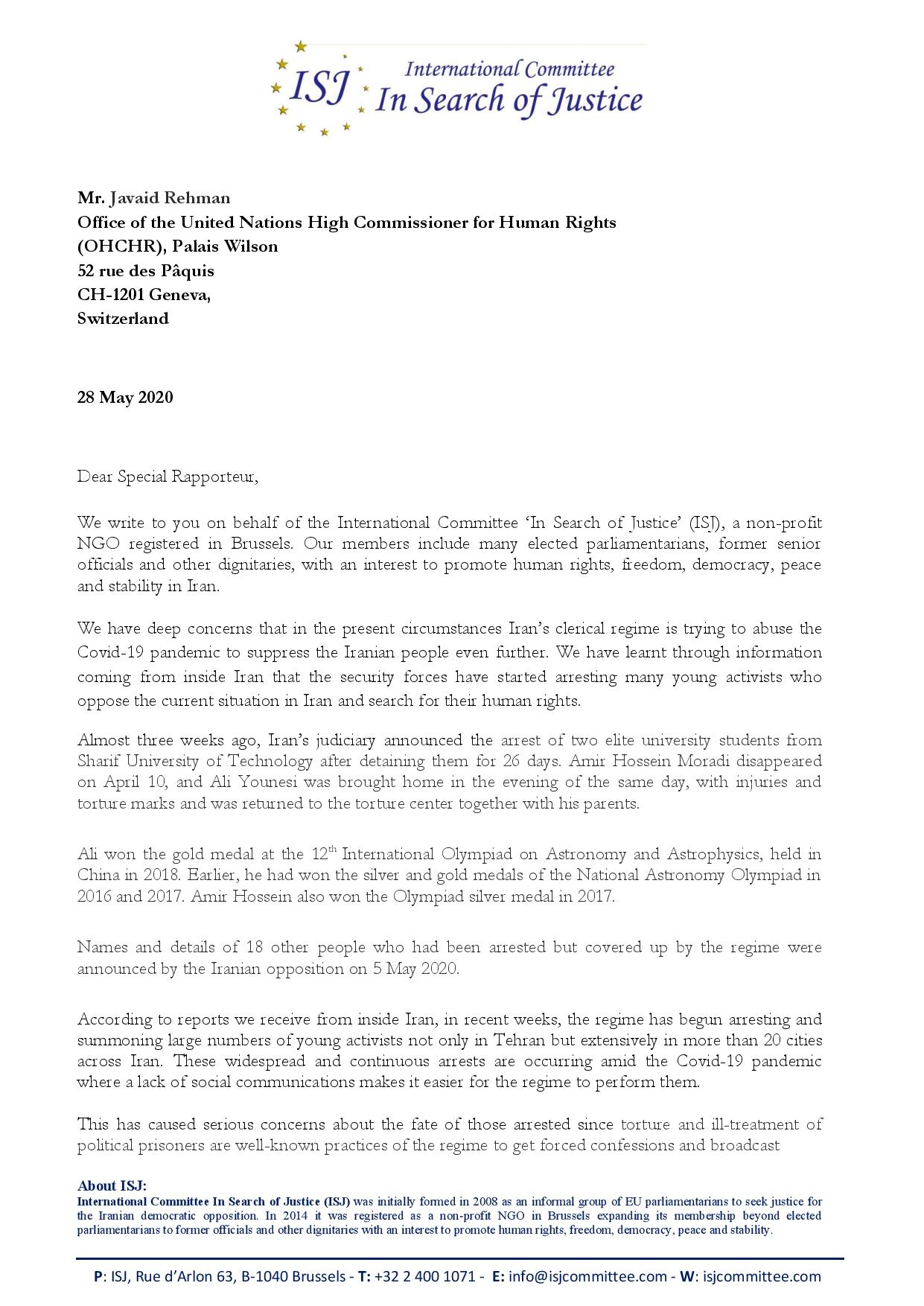 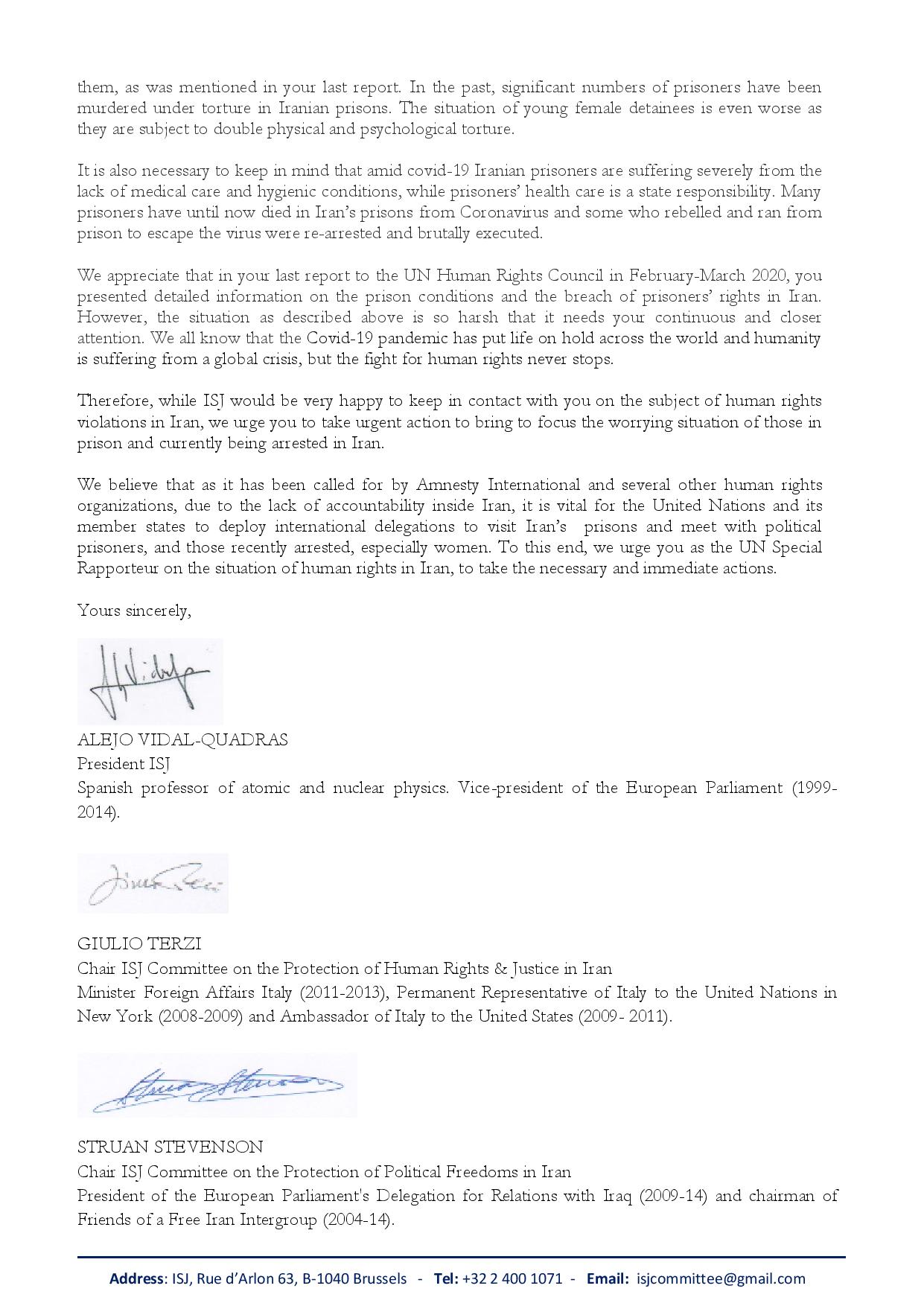 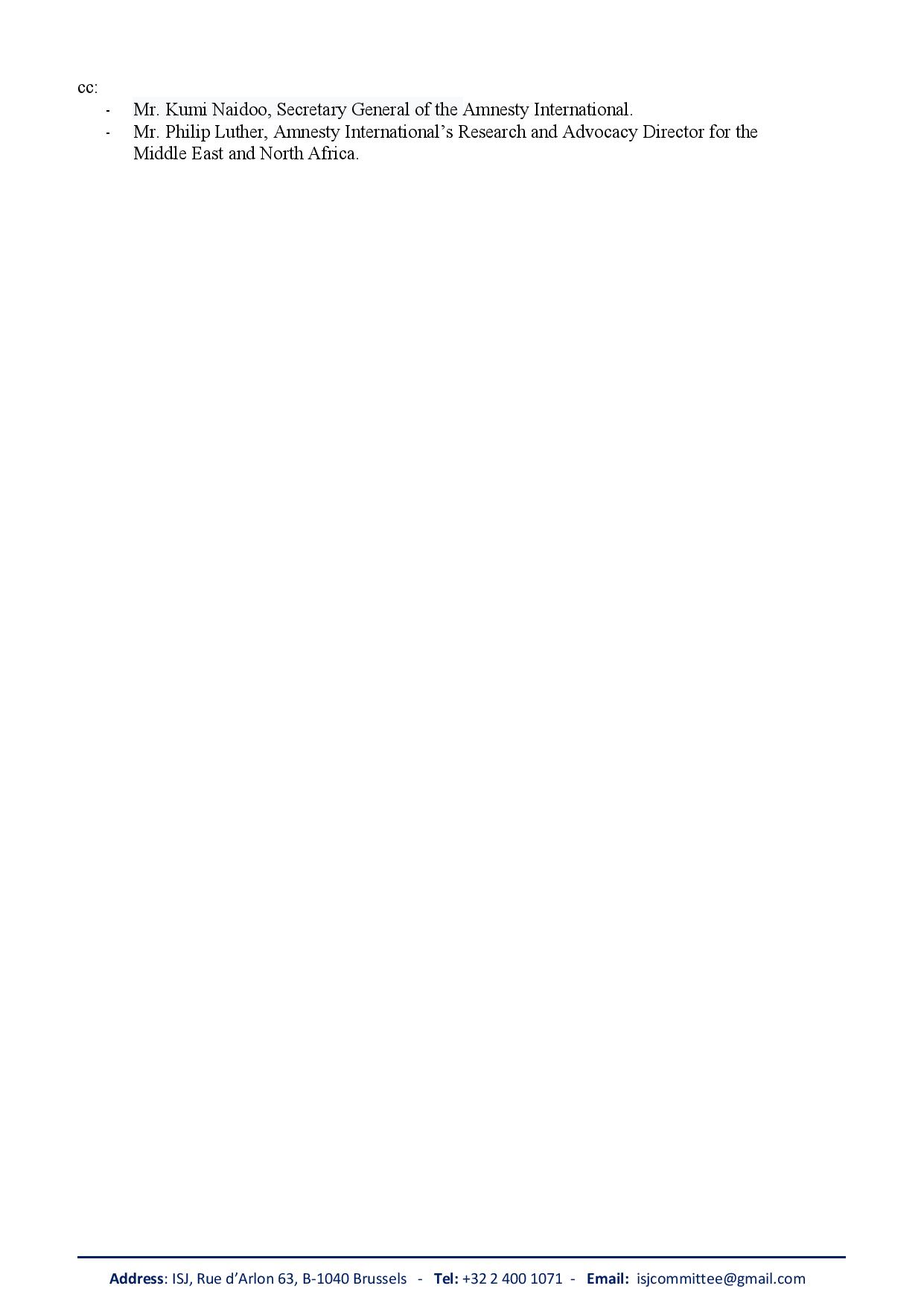