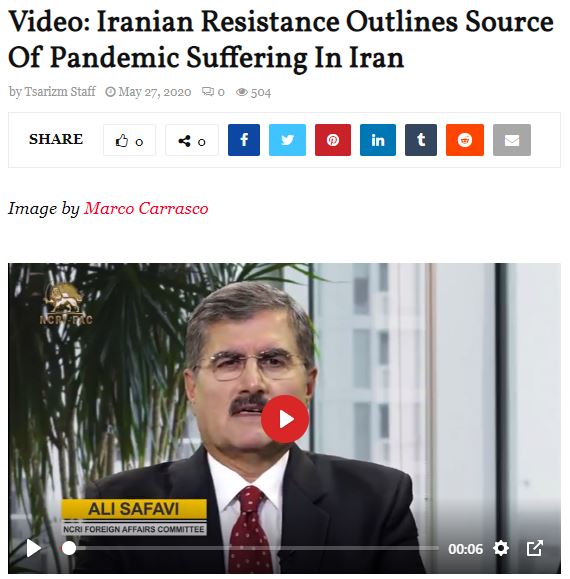 The Iranian Resistance has outlined the source of the massive suffering in Iran due to Chinese coronavirus. Corruption of the regime in endemic to the crisis.

In this video, I explain #Iran regime’s lies & cover-up concerning the #coronavirus pandemic. The mullahs deceitfully claim sanctions are hurting, whereas they are hoarding the medicines & stealing the money destined for it. https://t.co/xnOS7rFuet @NCRIUS @statedeptspox

The network of the main opposition movement the People’s Mojahedin Organization of Iran (PMOI/MEK) inside of Iran known as the Iranian Resistance Units spread its activities across the country on Saturday. They bravely took to graffiti in public places with the slogan “Down with the principle of the Supreme leader’s rule,” ”As long as the mullahs rule Iran, Iranians will not be safe,” “Khamenei’s rule will be overthrown,” and ”Down with Khamenei, Viva Rajavi.”
They wrote:
Tehran— “Down with Khamenei and Rouhani, Viva Rajavi”
Tehran— “Down with Khamenei and Rouhani, Viva Rajavi”
Qazvin— “Nationwide uprisings will overthrow the mullahs’ regime”

Tehran— “Khomeini usurped the most vital right of the Iranian people, their sovereignty, damn Khomeini”
Tehran— “Down with the principle of the Supreme leader’s rule”

Even a member of the mullahs’ Majlis (parliament) acknowledged that authorities are not addressing this crisis.

Forest fires are expanding in #Iran and the regime is refusing to take any adequate action.

Even a member of the mullahs’ Majlis (parliament) acknowledged that authorities are not addressing this crisis.pic.twitter.com/cU1VsRksYg

And here’s a little reminder for Iran officials who have suddenly become human rights advocates, while systematically carrying out gross human rights violations in Iran every day

And here’s a little reminder for #Iran officials who have suddenly become human rights advocates, while systematically carrying out gross human rights violations in Iran every day. #IranProtests pic.twitter.com/QjyHZrClJL

Qalibaf: From the IRGC brigadier to the speaker of parliament

Iran’s regime parliament elected Mohammad Baqer Qalibaf as speaker last week. On Sunday, May 31, in his first speech to parliament, Qalibaf outlined a roadmap for the regime’s parliament.

Qalibaf emphasized on the regime’s policy in the continuation of terrorism and war in the region. He said the most important opportunity for the regime is the leadership of Ali Khamenei.

The International Committee in Search of Justice (ISJ), which enjoys the support of over 4000 parliamentarians on both sides of the Atlantic, in a letter to Javaid Rehman, the United Nations Special Rapporteur on the Situation of Human Rights in Iran, expressed its concern over the regime’s recent mass arrest of youth and supporters of the People’s Mojahedin Organization of Iran (PMOI/MEK) amid the coronavirus outbreak. It warned that those detained are at risk of execution. The ISJ particularly warned about the fate of two elite students, Ali Younesi and Amir Hossain Moradi, along 18 other individuals, arrested in early May.

Admitting to Internet shutdown and the massive dimensions of the uprising, Rahmani-Fazli: They wanted to turn this to a civil war and follow Syria’s roadmap

Finally, after seven months, the mullahs’ Interior Minister admitted the murder of 200 people during the November uprising, claiming that 40 or 45 people, or about 20 percent of them had been killed by non-standard weapons

Seven months after the November uprising, while trying to minimize the number of victims of November 2019 uprising by 10 percent of the actual figure, Abdolreza Rahmani-Fazli, Rouhani’s Interior Minister admitted last night that more than 200 protesters had been murdered.

Maryam Rajavi: The forests and pastures of 9 provinces along the Zagros Mountains have been burning for 9 days

In the absence of any effective measures by the government, people are fighting the fire with empty hands. The clerical regime is not only sending the people of Iran to the killing fields of the coronavirus, but also destroying the environment.

The clerical regime is not only sending the people of #Iran to the killing fields of the #coronavirus, but also destroying the environment.

May 31, 2020—It has been some time that the mullahs’ regime has launched a propaganda campaign calling on the West to lift sanctions and allow Iran to fight the novel coronavirus and maintain its economy in order to help the Iranian people.
In this video, you will see if sanctions actually impact the regime’s fight against COVID-19 or not.
U.S. sanctions are not impeding Iran's coronavirus response

Iran’s economic situation and injustice will lead to a revolution, regime insider says

In an interview with the Iranian regime’s state-run news agency Etemad Online, Mohammad Reza Mortazavi, head of Iran Flour Association and Iran’s Center of Food Industries Associations, discussed Iran’s economic corruption and the plight of workers and the situation of mid-class families. He concluded that the ongoing economic situation in Iran and the injustice will lead to a revolution.
The interview was removed from Etemad Online website shortly after publication.
Iran's economic situation and injustice will lead to a revolution, regime insider says

Monday, June 1, 2020, marks the 200th day since the beginning of the nationwide Iran protests.