HomeSRSOpen Letter by Lord Clarke of Hampstead to BBC for Repeating Iran...
SRS 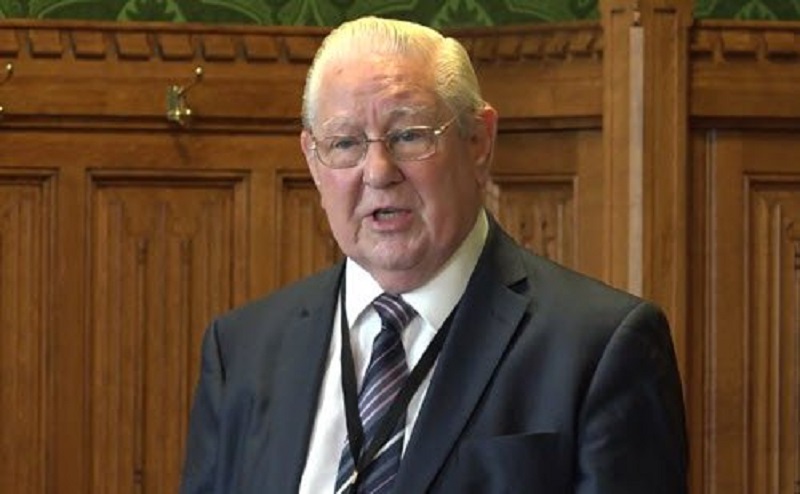 I would like to express my concerns about two Journalist mention this in her propaganda program against the ? pic.twitter.com/4icBexQRIX

The statement, which is available on NCRI’s website (link added below), goes on to express PMOI (MEK)’s concerns regarding participation of individuals in the programme who are known for their ties to the Intelligence Ministry of the Iranian regime (MOIS) and for a hostile agenda against the Iranian opposition based spreading MOIS propaganda under the disguise of “former PMOI (MEK) members”.

“The MEK representatives also told [Ms Pressly] not to expect the MEK to be part of a program that was wittingly or unwittingly based on an MOIS script. They also told her that they should not be expected to be part of a program that also included individuals whose objective and mission is collecting intelligence and assisting the Iranian regime to conduct terrorist operations against the MEK. No one would have

I fully support their position and believe them to be reasonable. And so should have BBC if its real intention was to provide a fair and objective report on the PMOI (MEK) and their new presence in Albania.

Regretfully, your reporter chose to provide these individuals an opportunity to use BBC’s global platform to spread known lies and misinformation about the Iranian opposition. Furthermore, your reporter failed to challenge these individuals on their proven connection to the MOIS and mention Tehran’s use of “former PMOI(MEK) members” to plan and carry out terrorist attacks against the PMOI (MEK) in Albania, as reported by the Albanian police on 23 October 2019, effectively rubber-stamping the MOIS demonisation campaign of the most organised opposition to the Iranian regime.(2)

It is worth noting that one of these individuals who was interviewed for the BBC programme was expelled from the PMOI (MEK) on security concerns, as explained by the NCRI. “The order to expel Heyrani from the MEK for intelligence, security concerns, and his treason and his apology in his own handwriting is attached below. The document was provided to the Court in German and the BBC journalist had access to it”, the NCRI says in its statement. (1)

The reference to the German Court concerns a similar reporting by the weekly German magazine Der Spiegel earlier this year based on the same baseless allegations. Following an injunction to the Press Chamber of the Hamburg Regional Court by the NCRI, the court found Der Spiegel to have acted illegally and that principles of permissible reporting have not been observed.(3)

Ms Pressly should have included this crucial fact and others in her reporting but she regretfully did not do it only confirming PMOI (MEK) was justified to have serious concerns about taking part in the programme.

Together with many of my cross-party colleagues from both Houses of Parliament, I was personally involved in the international campaign for the safe relocation of PMOI (MEK) members out of Iraq in third countries, which was a great achievement for the Iranian Resistance movement. We work with the UN and know that the PMOI (MEK) members relocated to Albania under the supervision of the UN Refugee agency after it received and processed their individual application.

In fact, when they were in Iraq, the PMOI (MEK) members were interviewed individually during months by seven US security and intelligence agencies, which found none of them being involved in any illegal or terrorist activities. This rejects the notion of PMOI (MEK) members being controlled and denied access to the outside world.(4) I also know this because my colleagues in the UK parliament and reporters from other international media visited PMOI (MEK) in Albania, Ashraf 3, and spoke to its members, most recently this summer during the five-day Free Iran convention when the PMOI welcomed the world to its new home.(5)

It is hard to understand why the BBC deliberately excluded these important facts from its programme. The only explanation is that it has failed to do its due diligence and follow up on critical facts and evidence. In any case, the growing threat against the PMOI (MEK) from the regime in Tehran and its Intelligence Ministry, which is well-documented and undisputed, should provide BBC with enough reasons to remove these bias programmes from its platform.

This is not to suggest that BBC should not report on the important subject of the organised Iranian opposition but my argument is that you should engage with the PMOI (MEK) to produce a programme on a fair and objective basis, which also mentions the fact that over 120,000 of their supporters and member have been executed by the regime since 1979.

(1) Statement by the Security and Counter-terrorism Committee of NCRI, 7 November 2019: https://www.ncr-iran.org/en/ncri-statements/iran-resistance/26848-disgrace-by-bbc-radio-4-in-bashing- mek-in-favor-of-religious-dictatorship-ruling-iran

(4) Statement  by British Committee for Iran Freedom  on the Relocation of PMOI (MEK) members from Iraq to Europe, 9 September  2016: http:/iran-freedom.org/index.php/503-statement-on-the-relocation-of-pmoi­-members-from-iraq-to-europe 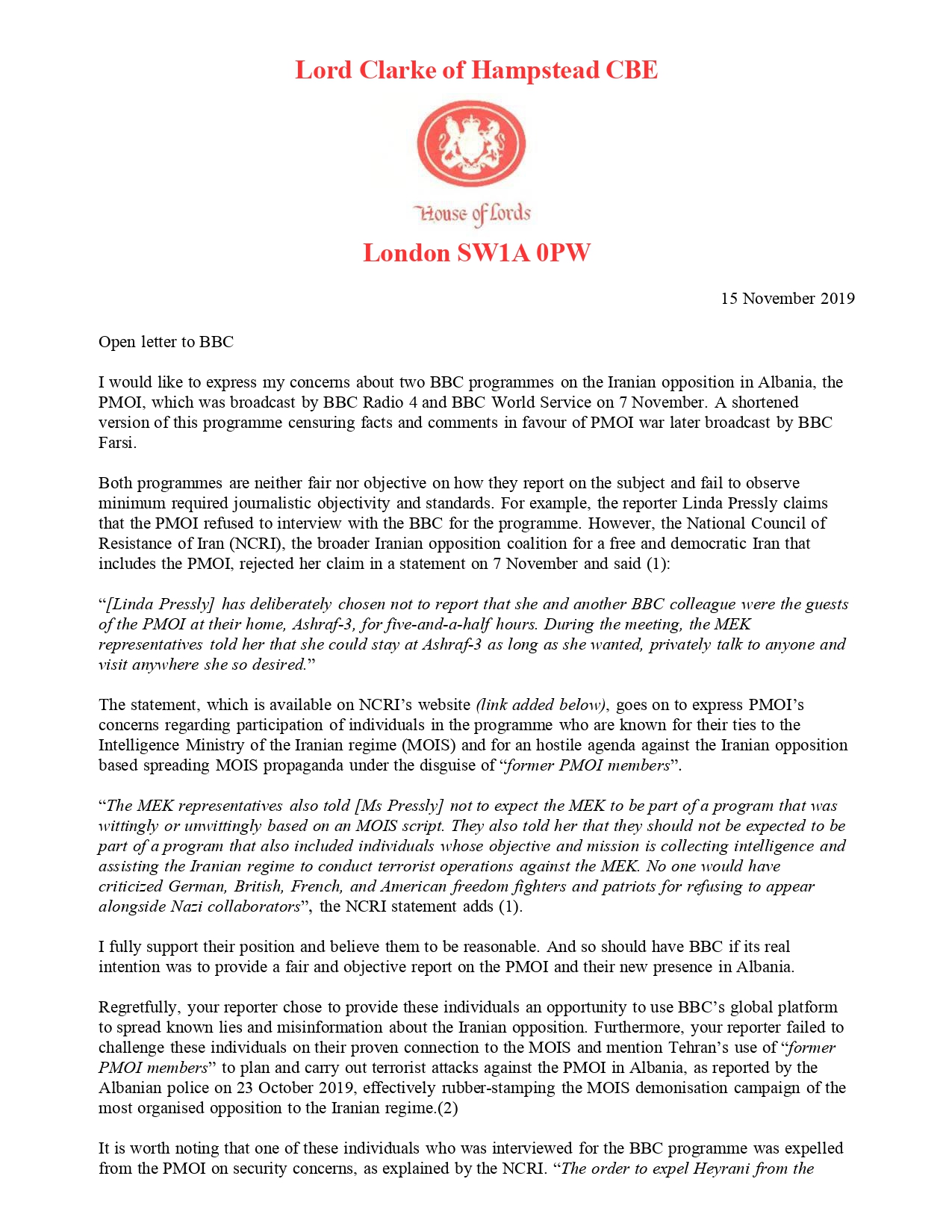 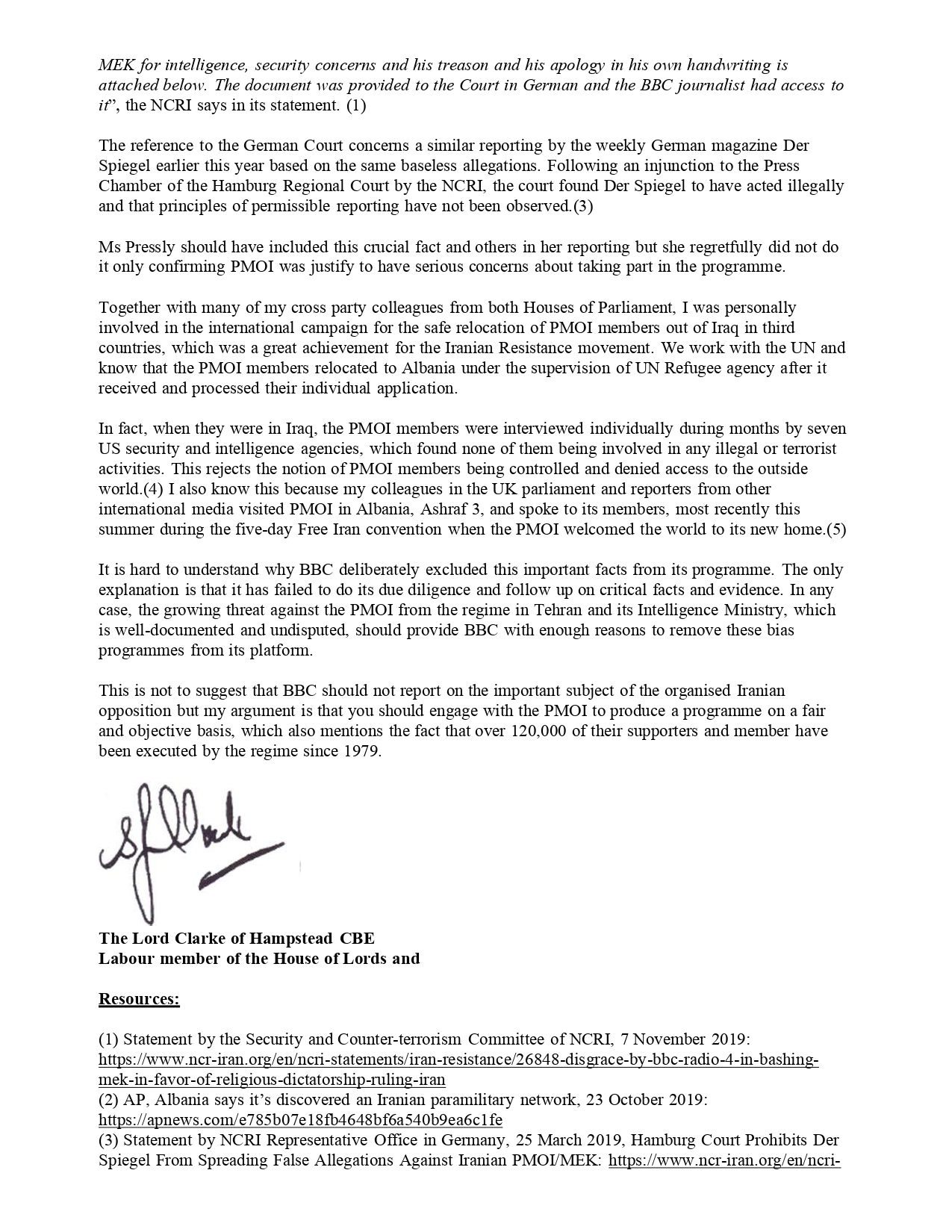 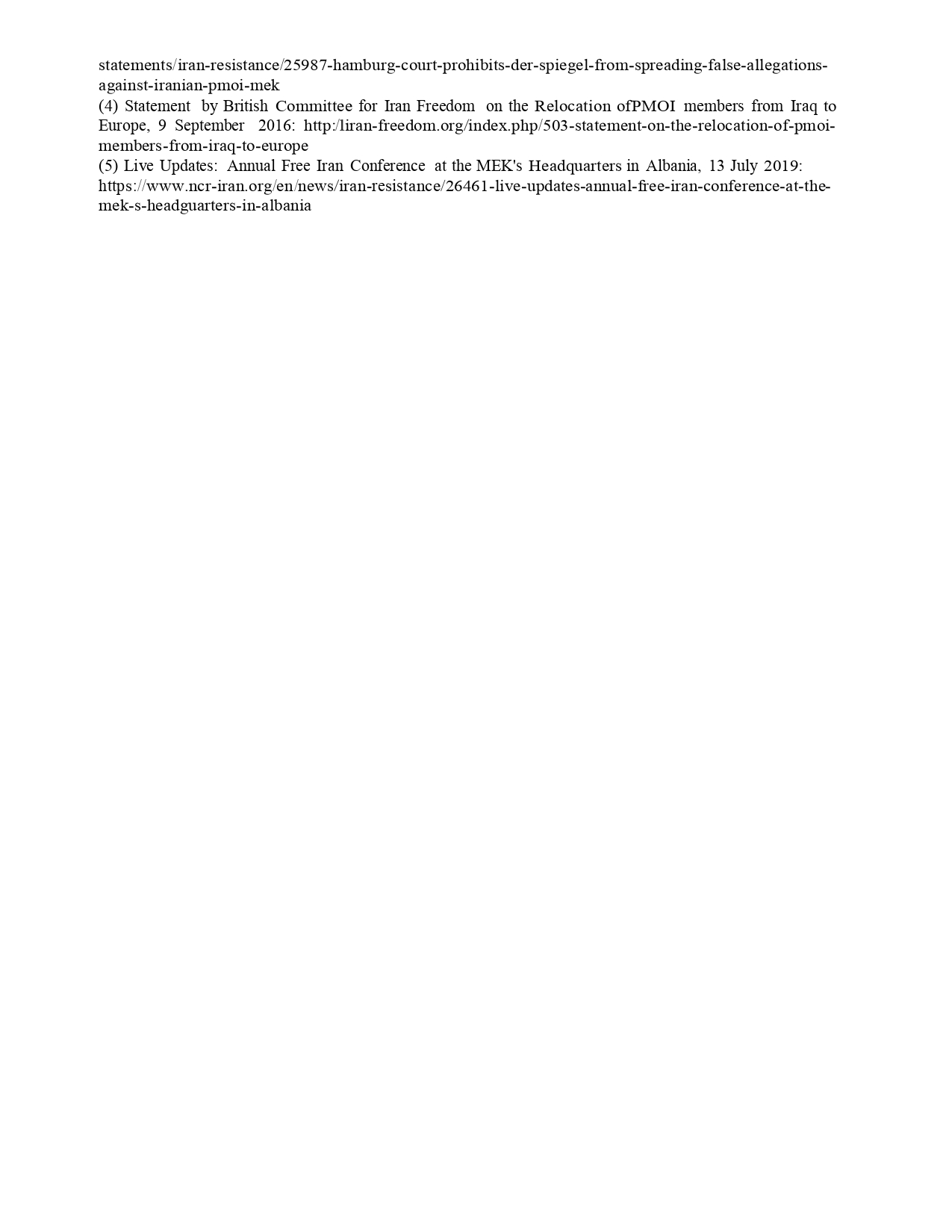