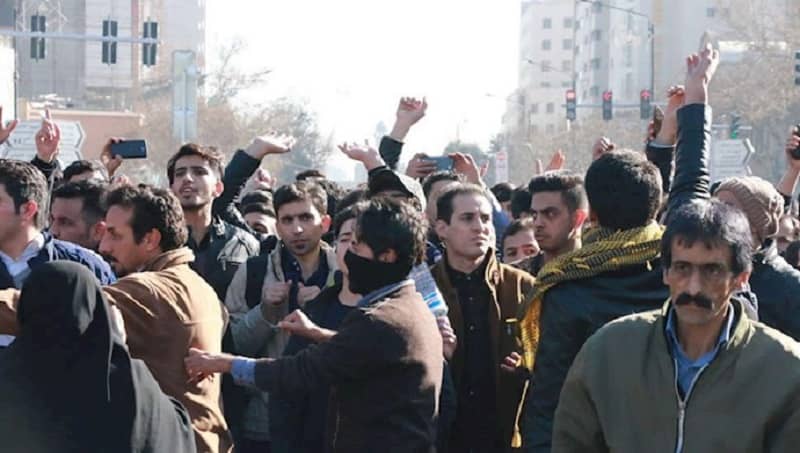 The Covid-19 outbreak has plagued Iran. “The fourth peak of the coronavirus is rapidly spreading across the country,” wrote the state-run Mostaghel daily on Thursday. People are also grappling with poverty. Thus, Iran’s society is on the verge of a social explosion.

The regime has used the coronavirus outbreak and its mass casualties to prevent another uprising. “The Covid-19 outbreak currently prevents the impoverished people’s rebellion,” said Ahmad Tavakoli, a member of the regime’s Expediency Council, on Thursday in this regard.

Yet, despite the regime’s inhuman Covid-19 policy, daily protests by all walks of life have started after a brief pause in Winter and spread across the country.

On Wednesday, retirees held their nationwide rallies for the 10th time in a row. They chanted slogans such as “We’re fed up with this injustice,” “We will not vote anymore. We’ve heard too many lies,” showing that the regime’s inhumane Covid-19 policy has failed.

Now the mullahs’ regime faces two facts. First, the society’s restiveness; as Tavakoli said, “People are in such a difficult condition that those things [uprising] that shouldn’t happen, occur.” This is because people are having severe problems in making ends meet. “The situation for the low-income people is tough, and prices are increasing daily. This situation is worrying,” said Ahmad Janati, head of the regime’s Guardian Council, on Thursday. People are fed up with the regime’s policies, actions, and corruption, which have devastated their lives. Thus, the regime’s oppressive measures and its inhumane Covid-19 policy are no longer able to prevent people’s uprising once it happens.

Secondly, the society’s explosiveness, and the regime’s international isolation, have increased the mullahs’ factional feuds. In the regime’s parliaments, they have been calls for the impeachment of the mullahs’ president Hassan Rouhani. The regime’s forces are demoralized to the point that Supreme Leader Ali Khamenei, on March 21, warned about his forces “Laziness, getting tired, and getting frustrated.”

Regarding his regime’s international isolation, Khamenei only has two options: Drinking the chalice of poison by abandoning exports of terrorism and nuclear weapons programs or being crushed under sanctions.

Thus, it is safe to say Iran is on the verge of a revolution. “Iranians are filled with anger…. They only curse and threaten [regime’s officials], and the consequences of these situations are crystal clear,” wrote the state-run Arman daily on Thursday.

Therefore, as Arman daily wrote: “We possibly not last a year.”