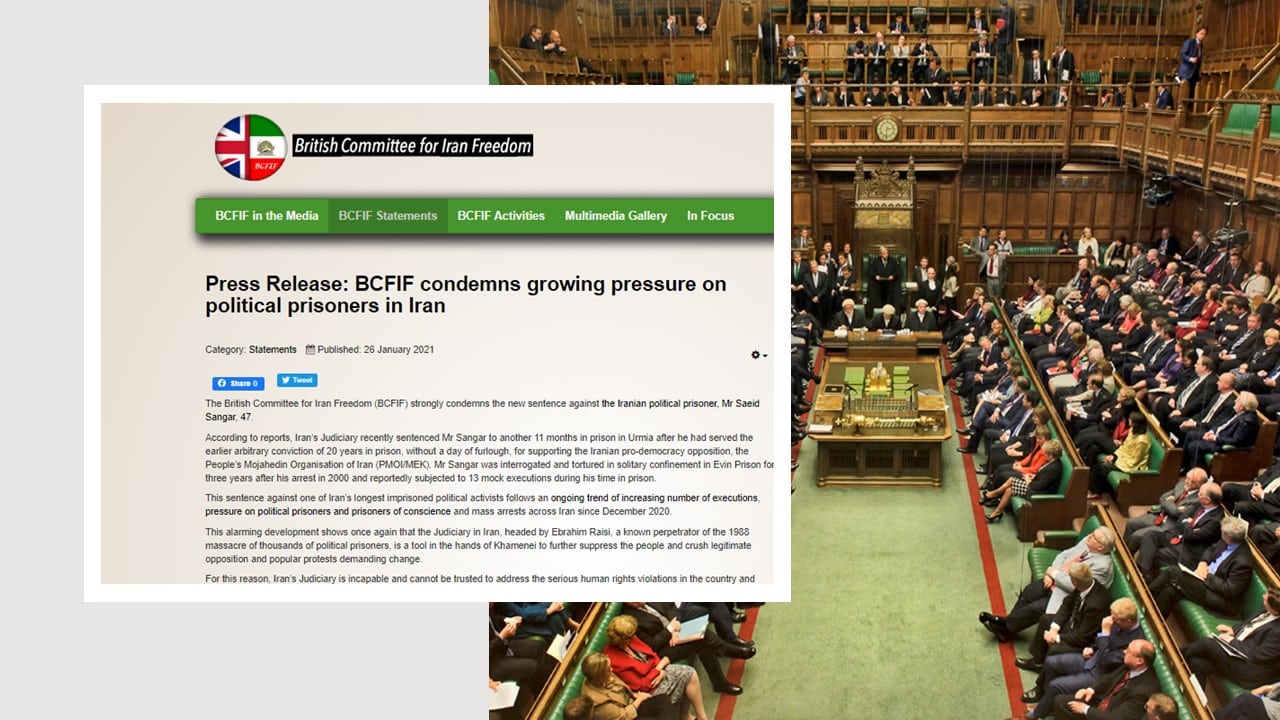 The British Committee for Iran Freedom (BCFIF) on January 26 strongly condemned the new sentence against Iranian political prisoner Saeid Sangar, who has been in prison over the past 20 years. British lawmakers called for international intervention since Iran’s regime continues to ignore the international condemnations and shrugs off pleas and recommendations to improve the human rights situation.

Saeid Sangar, 47, was arrested in 2000 for supporting the People’s Mojahedin Organization of Iran (PMOI/MEK). While his prison term has finished, the regime’s Judiciary sentenced him to 11 more months in prison.

“According to reports, Iran’s Judiciary recently sentenced Mr. Sangar to another 11 months in prison in Urmia after he had served the earlier arbitrary conviction of 20 years in prison, without a day of furlough, for supporting the Iranian pro-democracy opposition, the People’s Mojahedin Organisation of Iran (PMOI/MEK). Mr. Sangar was interrogated and tortured in solitary confinement in Evin Prison for three years after his arrest in 2000 and reportedly subjected to 13 mock executions during his time in prison,” BCFIF wrote on its statement.

On Monday, despite international pleas, the regime hanged Mehdi Ali Hosseini, an Iranian wrestler. Ali Hosseini was another athlete the clerical regime executed in recent months. The regime had previously executed Iran’s national hero and wrestling champion Navid Afkari for his participation in the second round of Iran protests in 2018.

There have also been more than 34 executions across Iran within the last few weeks. The upward trend of human rights violations in Iran is of no surprise when the Judiciary Chief is Ebrahim Raisi, one of the main perpetrators of the 1988 massacre.

In this regard, the British lawmakers underlined that the alarming human rights violations Iran show “once again that the Judiciary in Iran, headed by Ebrahim Raisi, a known perpetrator of the 1988 massacre of thousands of political prisoners, is a tool in the hands of Khamenei to further suppress the people and crush legitimate opposition and popular protests demanding change.”

The British lawmakers thus emphasized that “Iran’s Judiciary is incapable and cannot be trusted to address the serious human rights violations in the country and deliver justice for the growing number of victims, as demanded by the UN General Assembly in its latest resolution on Iran in December last year.”

While asserting that “any relations or push for negotiations with Iran must be contingent upon verifiable improvements of the human rights situation in the country,” the BCFIF also underlined that, “Failure by the UN and its member states to do so and ratify current situation risks to subvert the rules-based international system and undermine international human rights laws and UN conventions.”

The United Nations’ failure regarding the 1988 massacre has already emboldened the regime to continue its human rights abuses. The British lawmakers are not the only party that has criticized the international community’s inaction facing injustice in Iran.

In a letter published in December, seven United Nations experts, while referring to the 1988 massacre as “crimes against humanity,” underlined how the world’s failure in holding the regime to account for the 1988 massacre had a “devastating impact on the survivors and families as well as on the general situation of human rights in Iran.” They further underlined that this inaction “emboldened Iran to continue to conceal the fate of the victims and to maintain a strategy of deflection and denial that continue to date.”

As the human rights situation deteriorates in Iran, the international community has moral and legal duties to intervene.

In this regard, the British Committee for Iran Freedom called “on the UK Government to demand the immediate release of Saied Sangar as well as other political prisoners, those detained during popular protests in Iran and dual nationals imprisoned under bogus charges.”

They also urged the United Kingdom “to impose sanctions, under the UK Global Human Rights Sanctions Regulations, on regime officials, like Ebrahim Raisi, who are responsible for systematic and serious human rights abuses.”

As highlighted by the UK lawmakers, the European countries should make all of their relations with the regime in Tehran contingent on the regime’s immediate stop of human rights violations.

Previous articleIran News in Brief – January 29, 2021
Next articleEuropeans’ Call for Downgrading Relations With Iran’s Regime Is Much Needed, Long Overdue