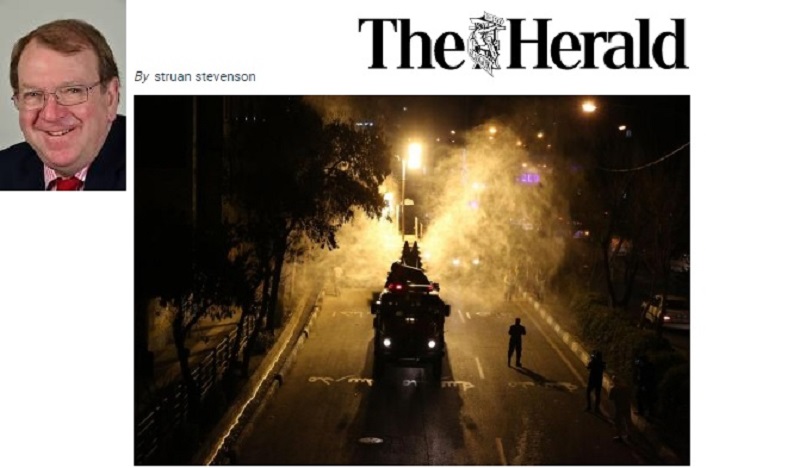 In an article published for “The Herald”, Struan Stevenson, former president of the European Parliament’s Delegation for Relations with Iraq, said that “the number of coronavirus fatalities in 196 cities and in all of Iran’s 31 provinces, has exceeded 6,400.”

“Nowruz, the Persian New Year, began yesterday. In normal years, Iranians globally would be celebrating the ancient ritual of Nowruz, which marks the beginning of Spring in the Northern Hemisphere and the first day of the first month – Farvardin – in Iranian calendars,” read the article.

“It is traditionally a time of great joy for millions of Iranians and non-Iranians around the world who gather to celebrate a season of new life and to wish each other good luck for the year ahead. Sadly, this year, because of the Covid 19 coronavirus epidemic, Nowruz was not a time of great joy inside Iran. Indeed, for the past 41 years, since the 1979 revolution swept the Ayatollahs to power, Nowruz has never been a time of unbridled happiness,” Mr. Stevenson added.

“As the ultimate killjoys, the mullahs have tried to scale back Nowruz celebrations. Citing the pre-Islamic roots of the festival from thousands of years ago, the theocratic regime always frowned upon it, in the same way as they have tried to stamp out music, dancing and most kinds of carefree entertainment that they regard as anti-Islamic, western and decadent. But the 80 million Iranian citizens who have been horribly oppressed by the clerical regime, would not tolerate a ban on their age-old celebrations. It is sadly depressing that the corruption and incompetence of the mullahs has, albeit inadvertently, led to the virtual outlawing of Nowruz this year,”

While referring to the rising death toll of the coronavirus outbreak in Iran, Mr. Stevenson wrote: “It is now known that the number of coronavirus fatalities in 196 cities and in all of Iran’s 31 provinces, has exceeded 6,400. Resistance units of the People’s Mojahedin of Iran (PMOI/MEK), the main democratic opposition movement, are able to provide the only accurate and reliable information coming out of the beleaguered country,”

“But despite the scale of the epidemic, which is spreading rapidly, the mullahs continue to tell the international community that less than 14,000 people have been infected by the virus nationwide and the death toll is 853. Dr Rick Brennan, the World Health Organisation’s Director of Emergency Operations, following a visit to Iran this week, said coronavirus cases in the country are five times higher than what is being reported,” he added.

Mr. Stevenson explained how the regime’s criminal-cover-up has expedited and enlarged the coronavirus. He wrote: “These clumsy attempts at cover-up and deception by the mullahs are aimed at hiding the fact that the clerical regime failed to take any effective preventive measures to deal with the spread of the virus, including the quarantine of cities where the infection was raging. The Islamic Revolutionary Guards Corps (IRGC), the regime’s Gestapo, who control the Iranian economy, have channelled almost all the available funds and medical resources, including protective masks and clothing, to the regime’s officials and to its own military personnel. Even doctors and nurses who are at the forefront of fighting the disease in hospitals, have no proper medical supplies and protective suits. There are reports that specialist equipment supplied by the World Health Organisation has been sold on the black market by the IRGC,”

“From the very beginning, the mullahs knew that the virus had infected people in the Holy City of Qom, a magnet for Muslims, but concerned that it would impact on turnout at their parliamentary elections and celebrations to mark the anniversary of the 1979 revolution, they covered it up and did not make any announcements to warn the wider population until it was too late. Nor did they make any preparations for preventing the virus from spreading. The Supreme Leader Ayatollah Ali Khamenei even ridiculed the disease and said the coronavirus was an excuse created by Iran’s enemies to discourage people from voting! He has farcically even blamed the Americans for what he calls “a biological attack.”

“There are no longer any beds available in many hospitals across the country. According to sources within Kashan, a city in Isfahan province, hospitals are so full that patients with the disease are being transferred to Tehran, over 150 miles away. The hospitals have even run out of equipment for testing patients for the virus and medical staff have no personal protective kits,” read the article adding:

“Physicians now reckon that by the first week of April, up to 40% of the Iranian population will be infected. With the nation in virtual lockdown and Iran’s citizens facing a virulent pandemic because of the stupidity and corruption of the mullahs, there is seething unrest across the country. Some masked and gloved protesters have even risked infection by gathering in towns and cities to register their disgust at the theocratic regime’s ineptitude. The Nowruz celebrations have been submerged under a sea of infection and incompetence,”

While comparing the mullahs’ regime with the rulers of the Middle Ages, Mr. Stevenson wrote: “It is worth remembering that the New Year in question, under the Persian calendar, is 1399. There are uncanny parallels with what is happening in Iran today and events that occurred in medieval 1399. Back in the Middle Ages, Europe was just beginning to recover from the Bubonic Plague pandemic, which had killed millions. England in 1399, was ruled by the tyrannical Richard II, who believed he was answerable only to God and who was thought by many to be clinically insane. He ruled over a cruel and despotic regime where opponents were routinely arrested, brutally tortured and often hanged in public. Women were treated as second class citizens,”

“The comparisons with 1399 Iran are striking. A tyrannical and irrational Supreme Leader, who claims he is answerable only to God, rules over a cruel and brutal medieval regime where arrests, torture and public hangings are commonplace and where misogyny and the treatment of women as second-class citizens are sadly all too familiar. In the opening scene of Shakespeare’s play Richard II, the King says: “Forget, forgive, conclude and be agreed: Our doctors say this is no month to bleed.” But the people of Iran are bleeding, and they will not forgive or forget. We can only pray that the Persian year 1399 will see the Ayatollahs swept from power, ushering in a happy new year for Iranians.” he concluded.

By Alejo Vidal Quadras Next month, a Belgian federal court will mostly likely hand down a conviction for four participants in an Iranian terror plot....
Read more
Blog

By Alejo Vidal Quadras On November 27, 2020, four Iranian terrorist operatives will go on trial in Antwerp. Among them is a high-ranking diplomat who...
Read more
Blog

By Alejo Vidal-Quadras This month, American authorities shut down at least 27 websites after determining that they were part of an increasingly sophisticated campaign of...
Read more