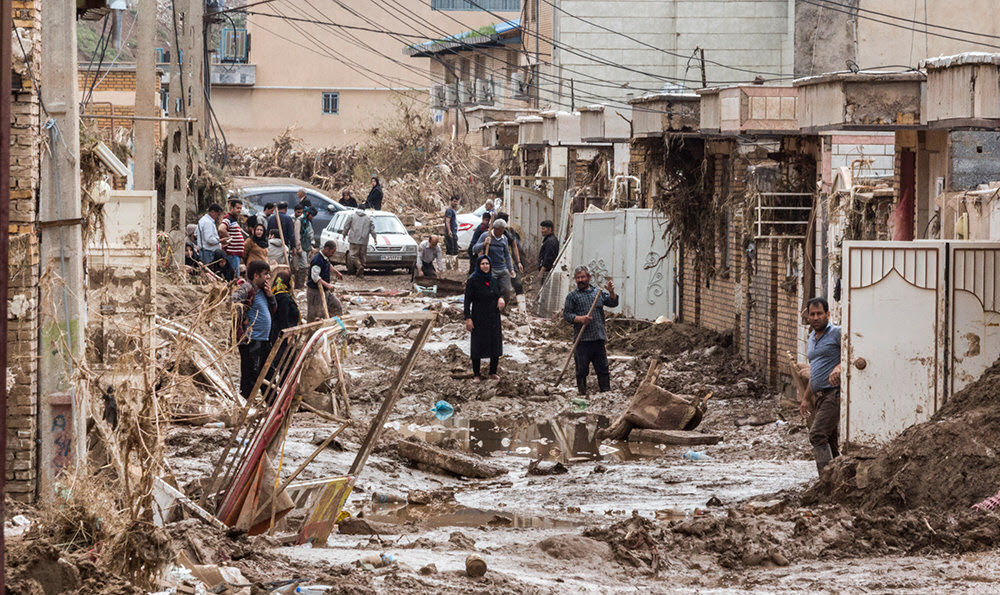 For the past few weeks, heavy rainfall has provoked intense flooding across Iran. Towns and villages have been submerged under water and even the larger cities have not been spared.

Security forces were blocking access to hospitals so that journalists could not accurately report on the situation. They have even allegedly been blocking family members of those injured from visiting relatives in the hospital.

Instead of the authorities of the Iranian regime pulling together and minimising the impact of the crisis on the people, there have been internal disputes and insults and allegations spread around.

Iran regime’s President Hassan Rouhani criticised the IRGC for the measures it was taking to get rid of floodwaters saying that the methods being employed are ineffective. An IRGC official publicly refuted this and said that the people are grateful for the IRGC’s intervention.

The flooding crisis is one of the worst natural disasters that has hit the country in 50 years. It is estimated that a quarter of Iran’s population has been directly impacted and that more than a million people are homeless as a result.

Large sections of roadways have been destroyed and dams and bridges have collapsed.

It is hardly surprising that the situation has been so serious when you consider the years and years of destruction that the regime has pushed ahead with, even despite the calls not to by environmentalists.

Dams were constructed far too quickly. As were road and railways. They carried out modifications to areas that would have acted as natural flood channels. The regime put money before infrastructure and made choices that have weakened the country’s overall infrastructure. It has modified rivers and diverted waterways. It has cut down large parts of forestland that increased the flooding risk. Buildings were constructed without meeting the most basic of safety regulations, and now the people of Iran are paying the price.
The Iranian regime has, once again, decided to pin the blame elsewhere. It will not take responsibility for anything. The Iranian foreign minister, Mohammad Javad Zarif, has said that the United States is to blame for the lack of aid. He said that foreign sanctions are preventing rescue efforts. However, this is completely inaccurate because food, medicine and humanitarian aid is exempt from sanctions.

The people of Iran are supporting each other, as they always do in times of need. Foreign media is showing videos of Iranians helping their neighbours and those that need help. In a time of desperation, the people are more united than ever.

It is certain that the regime’s absolute corruption and incompetency will fuel the people’s desire for regime change.