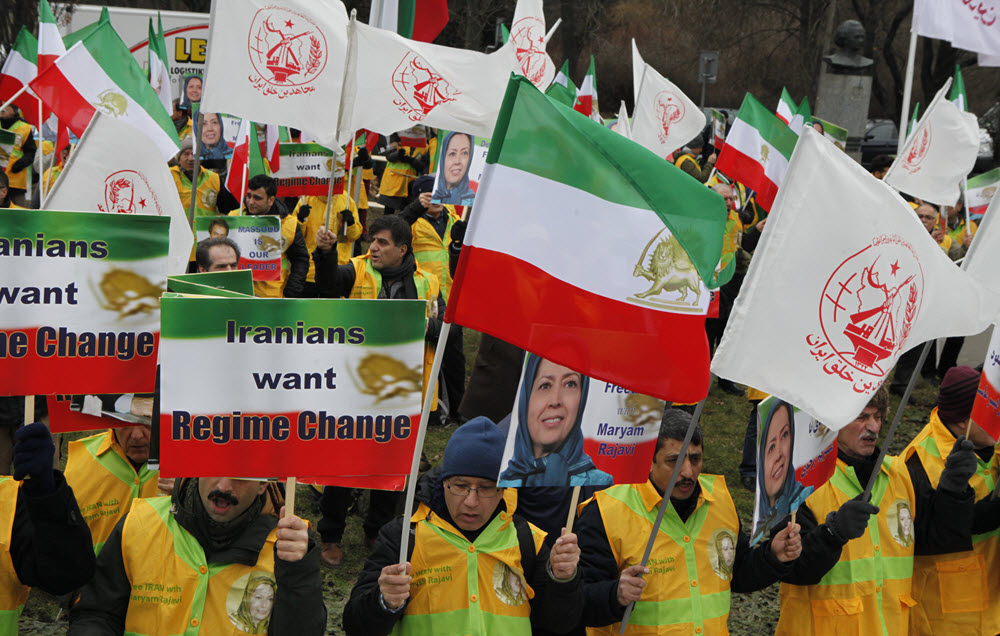 Using the powers of the February Decrees and Enabling Act in 1933/34 the Nazis consolidated their power and set about preventing any possible opposition. This included the use of fear and violence through Nazi organisations such as the SS and Gestapo. Hitler’s reign of terror spread far beyond the borders of Germany and quickly engulfed vast swathes of Europe and Africa.

The parallels with modern Iran are stark and terrifying. Following the Iranian revolution which brought Ayatollah Ruholla Khomeini to power in February 1979, the Iranian constitution was altered to introduce the system of velayat-e-faqih, or guardianship of the Islamic jurist, effectively providing the Supreme Leader with power claimed to come directly from God. Like Hitler, Khomeini moved rapidly to eliminate opposition to his clerical dictatorship, ruthlessly murdering tens of thousands of political opponents whom he claimed were guilty of ‘moharebeh’ or ‘waging war against God’. The secret massacre of over 30,000 supporters of the People’s Mojahedin of Iran/Mojahedin e-Khalq (PMOI/MEK) in the latter half of 1988, stands out as one of the worst crimes against humanity of the late twentieth century. Startling as these figures are, they are only a fraction of the estimated 120,000 political prisoners executed so far during the clerical dictatorship in Iran.

Khomeini created the Islamic Revolutionary Guards Corps (IRGC), as his own version of the SS and Gestapo. The IRGC not only brutally enforces the clerical regime’s oppressive domination of the Iranian population, it also controls most of the Iranian economy, paying no taxes and funnelling resources into the pockets of the ruling elite, while sponsoring terrorism and aggressive military expansionism abroad. Now, the country with the world’s second largest gas reserves and fourth largest crude oil reserves is facing economic meltdown and nationwide protests. Millions of Iranians have taken to the streets every day for the past fifteen months, protesting about the venal corruption of the ruling mullahs and their wanton spending on conflict and terror. In a blind panic, the mullahs’ regime has ordered the IRGC to crack down mercilessly on the protesters and strikers, murdering dozens and arresting over twelve thousand.

To spread their policy of violence and terror beyond Iran’s borders, the mullahs set up the Quds Force, an extra-territorial military unit under the control of the IRGC. It is commanded by General Qasem Soleimani, a coldblooded military strategist who is listed as an international-terrorist in the West. The Quds Force, like Hitler’s Einsatzgruppen Death Squads, sponsors and supports non-state actors in many parts of the Middle East and beyond, including Bashar al-Assad’s bloody civil war in Syria, the Houthi rebels in Yemen, the brutal Shi’ia militias in Iraq and the terrorist Hezbollah in Lebanon. The Quds Force role in intelligence gathering, cyber-attacks, bomb outrages and assassinations around the world are well documented.

Confronted with economic meltdown following President Trump’s withdrawal from Obama’s failed nuclear deal and the re-imposition of tough US sanctions, the mullahs now see their regime teetering on the verge of total collapse. They are lashing out like wounded beasts. Blaming the biggest and most organised opposition movement, the PMOI/MEK and its inspirational leader Mrs Maryam Rajavi for the ongoing nationwide protests, the mullahs have unleashed a worldwide demonization, blackmail and terror campaign.

In late June last year German police arrested Assadollah Assadi, a diplomat from the Iranian embassy in Vienna, in a joint operation involving the police and judicial and security authorities from Germany, France and Belgium. Two would-be Iranian bombers told the police that Assadi had given them the bomb and instructed them to detonate it at a major Iranian opposition rally near Paris, attended by prominent politicians like Rudy Giuliani and Newt Gingrich. The bombers were charged with acts of terrorism and are in prison awaiting trial. Subsequently, similar action was taken against Iranian terrorist plots in the United States, Denmark, Bulgaria, the Netherlands and several other European nations, who are now imposing their own sanctions on the Iranian regime and blacklisting some of its agents. In late December, the Albanian Prime Minister Edi Rama, expelled Iran’s ambassador and first secretary on the grounds that they posed a security risk to Albania.

It is clear that Iran uses its embassies as bomb factories and terror cells, plotting atrocities in Europe and America. The mullahs have Ministry of Intelligence & Security (MOIS) agents implanted in every European embassy. Their job is to track down and eliminate political dissidents or enemies of the fundamentalist regime. With a collapsing economy, massive unemployment and a growing recognition among the young and well-educated Iranian population that Iran’s vast oil resources have been systematically misused to enrich the mullahs and to finance proxy wars across the Middle East, the nationwide protests are now moving relentlessly towards a new revolution and the inevitable overthrow of the clerical regime.

Desperate to cling to power, the mullahs have ramped up repression, terrorism, demonization of the opposition and turned to the exploitation of cyberwarfare to spread propaganda, influence events, shape foreign perceptions and counter perceived threats. The US State Department says: “The Islamic Republic has developed its cyber capabilities with the intent to surveil and sabotage its adversaries, undermining international norms and threatening international stability.” In September 2018, Twitter closed 770 accounts run by the Iranian regime, declaring them false accounts for government propaganda and for disseminating fake news and lies. At the same time, Facebook, Instagram and Google closed similar accounts related to the regime. On October 17, 2018, Twitter published content associated with these 770 accounts, amounting to 1,122,936 tweets, along with embedded photos and videos. Amongst these tweets were hundreds that had been disseminated widely by Iran’s MOIS in the days before the Iranian opposition’s annual rally in Paris in June 2018, which always attracts a massive crowd of around 100,000 ex-patriot Iranians opposed to the mullahs’ regime.

In order to control Germany, Hitler needed the support of a well organised Nazi party machine. He created the SS and Gestapo for this purpose. By 1933 the SS had become a ruthless state within a state, whose members were fanatically loyal to Adolf Hitler. The SS and Gestapo were the ideological organisations responsible for all matters of security and racial policy within Germany and the occupied territories. Today, the IRGC and Quds Force are almost a mirror image of the SS and Gestapo and look set to suffer the same fate as the world witnesses the death throes of this thuggish Iranian regime.