Assertive Policies Can Halt Iran’s Efforts at Blackmailing the West 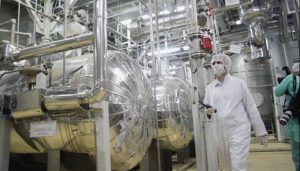 On Monday, tensions between Iran and the West continued to escalate as the Iranian regime took two distinct measures aimed at strong-arming the international community into providing new concessions. In the first place, the International Atomic Energy Agency confirmed that Iran had moved forward with plans to enrich uranium up to 20 percent, putting it only a short technical step away from the 90 percent enrichment necessary for nuclear weapons capability. Soon thereafter, it was announced that Iranian naval forces had seized a South Korea-flagged chemical tanker as it was transiting the Strait of Hormuz en route to Arab trading partners.

Both of these actions represent a consistent foreign policy strategy that threatens global security, Western interests, and innocent lives.

Regime authorities claim that the Hankuk Chemi tanker was detained as a result of “environmental pollution,” and yet the state-run newspaper Vatan-e Emrouz acknowledged the following day that that was a lie fabricated to justify using the ship as leverage during planned discussions with a visiting South Korean delegation. The discussions are over the seven billion dollars in oil revenues that have been frozen as a result of international sanctions.

The sailors’ safety cannot be taken for granted. This is clear from Iran’s recent dishonesty, and it is also clear from the long history of Iranian-hostage taking, which has at various times resulted in the execution of foreign and dual nationals on the basis of vaguely defined or unsubstantiated charges. Just weeks before Monday’s incident, the regime teased the possibility of another of these executions, announcing the transfer into isolation of death row inmate and Iranian-Swedish dual national Ahmadreza Djalali.

The Iranian-born academic, who has also taught at a Belgian university, was arrested in 2016 by agents of the Ministry of Intelligence and Security (MOIS), then brought up on spurious charges of spying on behalf of Israel after three months of interrogation and torture. Djalali later explained that in reality, the regime had pressured him to act as a spy on their behalf and that his eventual death sentence came about in part because of his refusal. But when the regime seemingly moved to accelerate the implementation of that sentence in late November, it was apparently in response to other circumstances involving Iranian-Western relations.

On November 27, a Belgian court held its first hearing in the case of Assadollah Assadi, an Iranian diplomat who was caught smuggling explosives into Europe as part of a terror plot against a gathering of Iranian dissidents near Paris in 2018. In March, as Belgian prosecutors built their case, Assadi threatened them by saying there were militant groups in Iran and the surrounding region that were prepared to pursue additional plots if Europe did not “support them.” Tehran continued to support him afterward, leaving little doubt as to their endorsement of threats as a tool for evading accountability.

In a tit-for-tat, Tehran wants to threaten Belgium with the ridiculous Djalali case. But it has failed thanks to Belgium declaring that the implementation of Djalali’s death sentence would be considered grounds for a complete severance of ties with the regime. To date, the Iranian judiciary has given no further indication of imminent plans to kill the Swedish citizen. This is while Sweden has moved forward with its own prosecution of an Iranian who is accused of committing severe and recurring crimes against humanity inside Iran. Hamid Nouri was involved in the massacre of 30,000 political prisoners in the summer of 1988.

Unfortunately, the legal assertiveness currently being demonstrated by the Belgian and Swedish judiciaries is out-of-keeping with the policies typically employed by Western nations in dealing with the Iranian regime’s hostage-taking and other malign activities. So far, there has been little in the way of an assertive response from the broader European community to hold Tehran accountable for the tanker seizure or the expanded nuclear enrichment at the heavily-fortified facility at Fordow.

The principal opposition National Council of Resistance of Iran (NCRI) has long criticized Western policies as tending toward “appeasement.” In its most recent statements, the NCRI underscores the danger of the European Union giving into “nuclear blackmail” of the Iranian regime.

If the US and Europe opt to exert more pressure on Iran over its expanded uranium enrichment and other violations of the nuclear deal, then it will almost certainly be necessary for Tehran to accept more serious restrictions before regaining access to Western markets and relief from US sanctions.

But if Western powers take the opposite approach and try to defuse the theocracy’s provocations with conciliation, then they will be courting the opposite outcome. The regime will once again feel secure in its assumption of impunity on the international stage, and it will conclude that hostage-taking and blackmail, in all their forms, are viable strategies for securing the regime’s interests.

There are multiple issues emanating from Iran at this very moment, which all demand a firm answer from the international community. The regime’s “nuclear blackmail,” its unlawful maritime adventurism, and its ongoing threats against detained Western nationals should all be understood as part of the same overarching phenomenon. They should all receive the same answer in the form of a coordinated commitment to sanctions, diplomatic isolation, and relevant prosecutions.

That is what the Iranian people, who have long called for democratic change in Iran through multiple nationwide uprisings, would expect from the international community. And it is also what will keep European citizens safe.

Previous articleAnniversary of Soleimani’s Death Reveals Cracks in the Iran Regime’s Narrative of His Popularity
Next articleIran: Regime’s Intelligence Ministry Creates a Fake Twitter Account in the Name of NCRI’s U.S. Representative