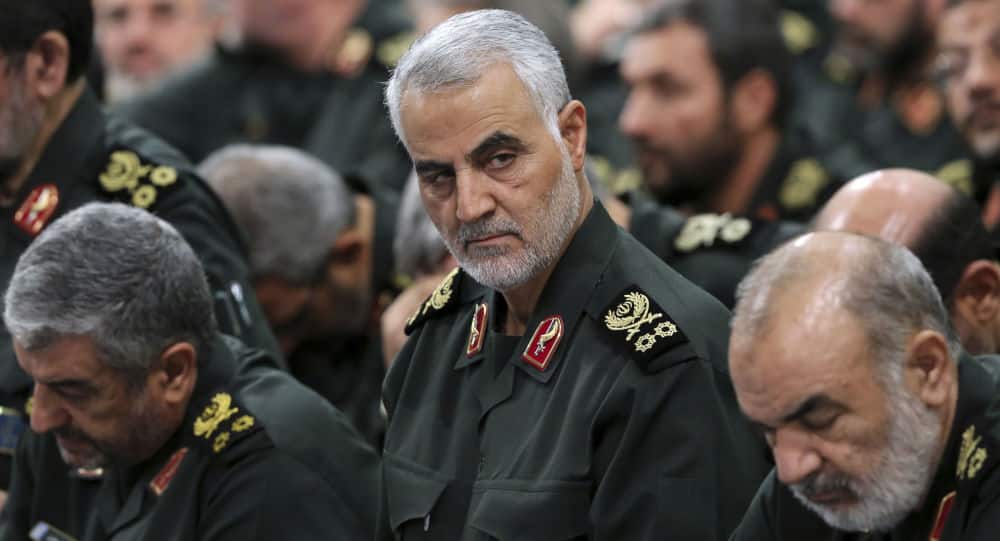 Last Sunday marked the first anniversary of the elimination of Qassem Soleimani, who was for many years the Iranian regime’s top terrorist. As head of the Quds Force, the special foreign operations wing of the Revolutionary Guards (IRGC), Soleimani played a substantial role in various regional conflicts, thereby bolstering the Iranian regime’s destructive influence in places like Iraq and Syria. Soleimani’s role secured his status as a hated figure among the general populations of neighboring countries and Iran.

While the regime has tried to deny this latter fact, small doses of reality seeped into state media broadcasts in the run-up to Sunday’s anniversary. In one program on December 31, an analyst noted that after the news broke on January 3, 2020, “Suddenly, we saw people in the region distributing sweets among each other celebrating the death of commander Soleimani.” This observation was independently corroborated by social media users who used the pending anniversary as an opportunity to circulate footage of those celebrations.

Remarkably, not all of the relevant footage was from outside of Iran. Iranians also expressed joy at the death of the regime’s foremost instrument of terrorism. In doing so, many dissidents and activists risked severe punishment at the hands of a regime that was keen to portray Soleimani as a populist hero. It was a risk that many were willing to take in the interest of countering the effects of the regime’s propaganda. And their numbers swelled in the week following Soleimani’s death when the IRGC’s attempted retaliation led to it shooting down a commercial airliner and killing all 176 people on board.

The ensuing protests spanned more than a dozen Iranian provinces and rekindled the anti-regime slogans that had defined two previous nationwide uprisings. The public’s defiance in the wake of Soleimani’s death was made all the more powerful by the fact that it came less than two months after the most recent uprising had been suppressed in November 2019, by IRGC operatives who opened fire on crowds and killed over 1,500 people. Many participants in the January 2020 protests embraced the prospect of further clashes with the IRGC by burning public images of its newly dead commander, Soleimani.

If you had read the news concerning Iranian affairs but were still not aware of this public expression of distaste for the Quds Force commander, you are not alone. In the wake of his death, much of the international media described Soleimani as someone who celebrated across the board in Iran and also by peoples all throughout the region. In countless commentaries on the US drone strike that killed him, foreign policy analysts suggested that the Iranian people would line up behind the regime in response. Few, if any, retracted their claims after the next week’s protests erupted.

Even then, the vast majority of international reporting proved to be very closely aligned with the Iranian regime’s propaganda. This was no mere coincidence. Western perspectives on the Quds Force’s reception in the Middle East had been influenced for years by the efforts of the regime’s Foreign Minister Javad Zarif, who tries to be the regime’s “moderate” façade and acts as the chief apologists to the regime and its Supreme Leader Ali Khamenei. Despite his ridiculous gestures of “moderation,” Zarif quickly yet joined other regime’s officials in praising Soleimani while he was alive and mourning him passionately when he was killed.

That mourning served to reinforce the regime’s prefabricated narrative about the popularity of the Quds Force leader, and thus also about the popularity of the terrorist regime that he represented. Zarif himself explained the situation in a state media interview broadcast precisely on the anniversary of the drone strike. “The first aim of my colleagues and I in the Foreign Ministry was to take the propaganda in hand and portray Haj Qassem as a hero of combatting terrorism and promoting peace,” the foreign minister said.

It long past time for the international community to pursue policies that acknowledge local awareness among Middle Easterners about the damage that Soleimani has done to the region, and the good that can be done now that he is no longer actively reinforcing every crisis that was fueled by Iranian influence.

The international community should especially emphasize the voices of the Iranian people who recognize Soleimani as having been a conduit through which national resources and public wealth flowed out of Iran, shoring up a power base for the clerical regime but making life steadily worse for ordinary people all across the country. In highlighting the stories those Iranians have to tell, the media will surely come to recognize the undercurrents of dissent against the entire regime which are simmering in the wake of recent uprisings and preparing to once again challenge that regime’s hold on power, now that its force projection has been faltering in Soleimani’s absence.

There is much that the international community could do to support the next uprising when it inevitably comes about. And there is much they can do to further weaken the grip of the Quds Force, even without risking direct involvement in the regional conflicts that Tehran is still clinging to. The best general strategy for accomplishing both of these aims is to unite in exerting consistent pressure on the Iranian regime via targeted sanctions and diplomatic isolation. The Iranian people will recognize this as being to the regime’s detriment but their benefit, just as they recognized the same outcome from Soleimani’s death.

The European leader should particularly apply more pressure on the regime after recognizing both the persistent danger and the domestic unpopularity of Tehran’s malign activity.

In 2018, that danger came shockingly close to home for many Europeans and especially for Iranian dissidents living in the West. It was then that an Iranian diplomat-terrorist named Assadollah Assadi smuggled a bomb into Europe and handed it off to two other terrorists with instructions to set it off at the annual gathering of the National Council of Resistance of Iran near Paris. Whereas other diplomats have been credibly accused of ties to Iranian terrorism in the past, Assadi is the first to actually be prosecuted, and he could face 20 years in prison after he is sentenced by a Belgian court late this month.

The international community, mainly the European Union, should recognize Assadi’s trial as the trail of a terrorist regime and expel its diplomat terrorists and shut down Iranian embassies in their countries.