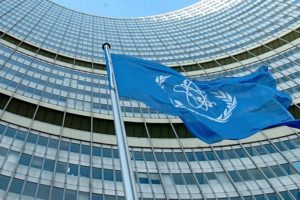 The International Atomic Energy Agency was considering a resolution to censure the Iranian regime formally. According to those who have seen a draft that was circulated by the three European signatories of the 2015 Iran nuclear deal, the resolution would have focused on recent IAEA revelations about the presence of uranium particles at three sites that Iran had not previously identified as having played a role in the country’s nuclear program. But there are many other markers of Iran’s deceptions and malign ambitions which could just as easily be highlighted and should be. At the last-minute, Britain, France, and Germany decided not to present a resolution.

Unfortunately, the international community appears to be giving little attention to some of the most important examples, such as recent comments from Intelligence Minister Mahmoud Alavi, which threaten to undermine longstanding narratives about Iran’s willingness to embrace restrictions on its nuclear program.

In the past, certain Western policymakers have openly supported the Iranian regime’s claim that those restrictions were actually redundant since Iran’s Supreme Leader Ali Khamenei had issued a fatwa stating that nuclear weapons were contrary to Islam and should not be sought by his government. On February 4, Alavi cited that fatwa while speaking to Iranian state media but did so only with the intention of shifting blame away from Iran and toward its foreign adversaries in advance of the regime actively pursuing the weapons that Khamenei had supposedly banned.

“The fatwa forbids the production of nuclear weapons, but if they push Iran in those directions, it is not Iran’s fault,” Alavi said. “Those who pushed Iran in that direction will be to blame.” This pronouncement comes very close to open acknowledgment of something that Tehran’s critics have long claimed: that the fatwa exists only to give cover to the regime. At the same time, it makes strategic advancements in nuclear research and the development of delivery systems for a nuclear warhead.

As long as anyone in Western policy circles is taking the fatwa seriously and thereby defending Iran’s position, the regime has significant opportunities to defend itself by claiming that any suspicious activity is actually part of a peaceful nuclear program. And if this line of deception never faces a serious challenge, it will leave the door open for Iran to quickly sprint toward the acquisition of a nuclear bomb after inching closer to the necessary benchmarks for each component of that weapon’s development.

This potential scenario should seem familiar to anyone who was following the debate surrounding the 2015 nuclear deal. Many of its detractors suggested that by offering Iran substantial relief from economic sanctions in exchange for only limited restrictions on its nuclear program, the Joint Comprehensive Plan of Action would only pave the way for Tehran’s eventual sprint to nuclear “breakout.” Many of the same critics pointed to the built-in restrictions on IAEA inspections as another major contributor to that outcome.

From the moment of its implementation, the JCPOA only allowed immediate inspections of sites where nuclear activities had already been acknowledged by Iranian authorities. Any sites that came under suspicion afterward would be subject to a process for assessing those suspicions and negotiating access, during which time Tehran would have opportunities to conceal or destroy evidence to whatever extent it was able. Furthermore, military sites were deemed to be categorically off-limits.

Of course, many of the people in charge of that decision simply failed to appreciate the danger, either because they took Khamenei’s fatwa at face value or because they were too confident in the completeness of their own intelligence about Iran’s past nuclear work. But now, the IAEA’s latest revelations about undeclared nuclear sites make it clear that there is still much to be learned about the advancements that Iran made in the years before the JCPOA was signed and this, in turn, highlights the underlying Iranian commitment to deceiving its negotiating partners in order to clear a path for its aggressive ambitions.

Those are surely the arguments that will be made by policymakers who oppose the draft resolution that prompted Iran to levy its latest threats, using IAEA inspections as a bargaining chip. But the failure to exert contrary pressure on Iran would only lead to the regime seeing greater value in such bargaining chips and trying to use them again and again for increasingly bold ventures.

The IAEA and the European signatories of the JCPOA need to accept that their rosiest interpretations of Tehran’s behavior have been proven wrong and that something needs to change in order to prevent that behavior from growing worse in the aftermath of the nuclear agency’s latest findings.