NCRINational Council of Resistance of Iran
EN FR DE IT AR ES AL
HomeeditorialEDITORIAL: When It Comes To Policy, Iran Nukes vs Sanctions Relief Is...
editorial

EDITORIAL: When It Comes To Policy, Iran Nukes vs Sanctions Relief Is a False Dichotomy

Written by The Editorial Board
31st March 2021 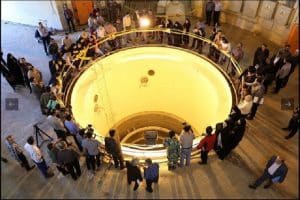 For decades, the Iranian regime, taking advantage of the western powers’ conciliatory policy, has extorted its way out of every single international and regional crisis, using terrorism and blackmail. It blew up the U.S. Marine barracks in Beirut, destroyed the Jewish Community Center in Buenos Aires, took hostages from a colorful array of nations, hijacked ships and tankers, launched drone and ballistic missile attacks on neighboring countries, and at home slaughtered peaceful protesters, sniped intellectuals, assassinated dissidents, and the list just goes on and on.

A 2009 BBC documentary exposed a shocking conversation between the Iranian diplomatic delegation with their European counterparts. They brazenly said: “Let us build our nuclear program, and we won’t kill your soldiers in Iraq.”

These were precisely the types of activities, which the architects of the Iran nuclear deal, known as the Joint Comprehensive Plan of Action (JCPOA), claimed will be raising with Tehran. Nothing of the sort happened. The JCPOA was not a starting point but the end game in so far as the regime was concerned.

Lacking legitimacy inside Iran, the mullahs have resorted to domestic suppression and egregiously violated the terms of the nuclear deal to project a position of power and gain the international ‘hands-off’ status they desperately need.

True to form, Tehran apologists have ignored the facts on the ground and the bi-partisan consensus, even among Europeans, for a more comprehensive agreement that would address the regime’s malign regional activities, terrorism, and missile program. Instead, they have been pressing the new U.S. administration to return to the 2015 deal, arguing that by offering sanctions relief, the regime will reverse course.

But the Iranian nuke or sanctions relief dichotomy does not pass the reality check. Even when the regime said it was abiding by the JCPOA, it kept its bomb-making infrastructure intact and continued to play the game of hiding and cheat. And it has yet to offer any convincing answers to questions raised by the International Atomic Energy Agency (IAEA) about uranium particles found in two previously undeclared sites.

Regionally, it continued its destabilizing activities in Iraq, Syria, Lebanon, and Yemen. And in Europe, it brazenly attempted to bomb a major gathering of the NCRI in Paris in 2018, where in addition to tens of thousands of people, several hundred European and American officials, lawmakers, and political figures were in attendance. Luckily, vigilance and swift action by European intelligence services thwarted the plot; otherwise, hundreds if not thousands of innocent civilians would have lost their lives. To make matters worse, a sitting senior Iranian diplomat masterminded the meticulously planned attack. A judicial investigation confirmed that the plot had not been his own initiative but ordered by Tehran.

There’s hardly any doubt that six UN Security Council resolutions brought the regime to its knees, forcing it to come to the negotiating table reluctantly. But the opportunity to put an end to the regime’s nuclear ambition was lost because of the feeble and misguided approach by the 5+1. The West must not fall for the mullahs’ posturing and blackmail now, particularly since the regime is reeling under the weight of the crippling sanctions and an increasingly furious and enraged population that, like a powder keg is ready to explode.

As such, the international community can ill-afford to let the leverage it has to get away by backing down now. The mullahs are at their weakest and most vulnerable point. The correct path forward is to stay the course and remain firm.