Online Conference: Iran’s Presidential “Election”, Is a Choice Between the Worse and Worse Than the Worse for the Regime 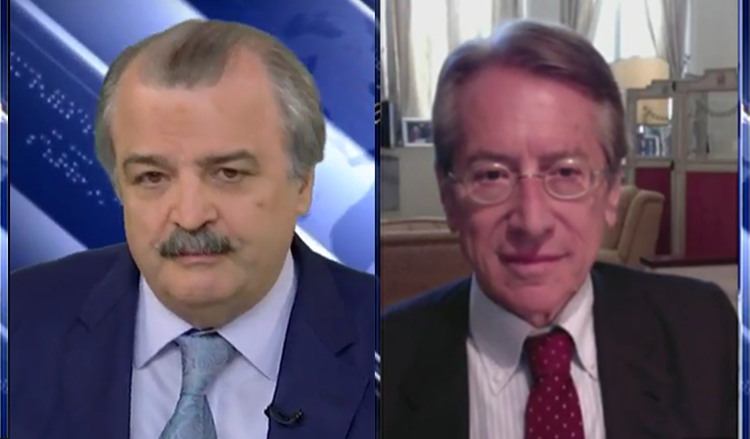 NCRI – The Iranian election is neither free nor fair, but it is significant since the regime is facing unprecedented culmination of political, social, economic and international crises. The election’s outcome will make the regime weaker and more fractured, according to two leading experts.
On Thursday, the Foreign Affairs Committee of the National Council of Resistance of Iran (NCRI) hosted an online conference with Ambassador Giulio Terzi, Former Foreign Minister of Italy and Mohammad Mohaddessin, Chairman of the NCRI’s Foreign Affairs Committee.

Amb. Terzi, underscored the failure of the regime in resolving any of the social and economic problems in the country despite the nuclear agreement between Iran and the P5+1, known as the Joint Comprehensive Plan of Action (JCPOA). He added that economic collaboration with Iran is “in contradiction of the West’s imperatives and objectives.”

The senior European diplomat stressed that any such collaboration will only serve to strengthen Tehran’s support for terrorist activities in the region while empowering the Iranian Revolutionary Guard Corp (IRGC). He emphasized, “One should not expect a major shift in Tehran’s policies after the elections. It will be a huge folly and total misguided approach by the West to pin any hope on the results of this election.”

Mr. Mohaddessin reminded viewers of the limited power any president would have under the velayat-e-faqih system (absolute rule of clergy) in Iran, and emphasized “any flow of state of affairs in the clerical regime is in the hands of Supreme Leader Ali Khamenei, his office, and the IRGC.”

“Elections in the clerical regime is power sharing between various factions of the brutal regime. It is also about various factions’ share in plundering the Iranian people’s wealth,” Mohaddessin said.
According to the NCRI Foreign Affairs Committee Chair, all the factions of the regime are in total agreement with each other when it comes to main policies of the regime, i.e. suppression at home, export of terrorism and fundamentalism and also proliferation of weapons of mass destruction.”

While touching upon the background of two leading candidates, Mohaddessin said that Ibrahim Raisi was the most brutal and the cruelest person on the “death committee” that was responsible for 1988 massacre of 30,000 political prisoners. “His highest credit in the regime is his brutality, particularly in the massacre of the opposition, chiefly the [People’s Mojahedin Organization of Iran],” Mohaddessin said.

The incumbent President Rouhani has been in decision-making centers of the regime from its outset, was involved in the suppression of the popular uprising in 2009 and in over 3,000 executions, and as president has offered unrelenting support to presidential dictator Bashar-Assad, Mohaddessin added.

Mohaddessin said: “The difference between Rouhani and Raisi is that Rouhani, has combined brutality with deception.”
Ambassador Terzi stressed, “The notion that here are moderates and hardliners in the Iranian political landscape is delusional. This misperception has been pushed and advocated by Tehran and its proponents for obvious political reasons and have led to disastrous political debacles. Every U.S. administration since 1979, as well as many EU Countries in one way or another have chased this mirage and the results have been all the same.”

“It is time to draw the lessons. There are differences in semantics and tactics within Iranian actors but not over the merits and essence. The differences are on how to keep the regime in power,” Terzi added.

In the ninety minute conference and the following question-and-answer session with journalists, it was highlighted that Khamenei’s had identified a popular uprising similar to 2009 as a “red line” in the election process.

Mohaddesin said while Khamenei has the power of “engineering the election”, this is only to the extent that infighting of various factions do not lead to sparking an uprising which will seriously challenge the regime in its entirety.

“Khamenei brought forth Raisi as a presidential candidate to advance the line of contraction of the regime to implement his consolidated power, because he sees this as improving the chances of the regime’s survival.” “If Khamenei succeeds and can do the necessary engineering, getting Raisi as the President, this regime will have a much smaller base… Such a surgery will have defections from within the regime, and increasing discontent. The international community will know better than ever that reforms, moderation are absolutely a mirage.”

However Mohaddessin went on to add, “If Khamenei’s engineering fails, it will be a major blow to his prestige and reputation, conflicts within the regime will intensify, and Khamenei will be in a weaker position to choose a successor. In that situation, though Khamenei can try to depict Rouhani as a more acceptable candidate for the international community and gain concession that way, but his weakness causes escalation of the crisis between the factions over the division of power. At this point the absence of Ali Akbar Hashemi Rafsanjani [the recently deceased former president] becomes more obvious and dispersion peaks and the totality of the regime will face a major crisis.”

Mohaddessin concluded his remarks by saying: “[The] takeaway from all these factors is that the choices for Khamenei are between the worse and the worse of the worse. This is the reality that Khamenei has to deal with. This is a totally new situation and new prospects and brings the regime closer to its downfall.

Previous article
Iran’s Regime Sectarian Plans in Iraq
Next article
Syrian Opposition: We Reject Any Agreement With an Iran Regime Role in It