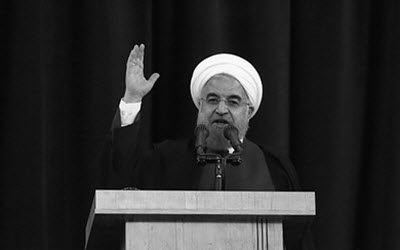 NCRI – On the verge of the Iranian regime’s sham election, the clash between rival bands is escalating, while both Mullah Rouhani the incumbent president and Mullah Raisi the Main rival are very well notorious for their criminal records and both are trying to preserve the ruling religious fascism intact. Through their attacks and counter attacks in so called election campaigns, more and more revealing facts regarding their suppressive records are surfacing.

In one of the latest counterattacks the state-run ‘Jawan press agency’, lashed Hassan Rouhani president of the regime and said: within the past few days Rouhani has been addressing some issues which are questioning some topics, especially those relating to national, security and major governing and general policies of the system at stake!

The IRGC affiliated agency continues: he (Rouhani) is insulting judges and (IRGC’s) commanders by chanting this slogan behind the podium that “no judges, no commanders, but a law-abiding government”

Jawan adds: he is boldly accusing the judiciary system, of knowing nothing but execution and prison within in the past forty years. Rouhani, knowingly or not, is not just challenging his fellow rival candidates but the entire system. If you are about to bring destruction upon your rivals, aren’t these issues within their range of responsibilities?

“As the current presidents, you are the director of the National Security Council, so even if your electoral rivals are not respecting national security boundaries, you shall be the one who has got to pacify the atmosphere,” the state-run agency adds.
Meanwhile Keihan, the state-run newspaper affiliated to Khamenie wrote:

Ten days before the elections, bullying and intimidations have increased. We are facing a heavy propaganda terrorism, claiming that if you don’t vote for us, there will be war and sanctions will snap back! They go even further than this and say: you don’t know them (rival candidates) if they come to power, they will create walls in sidewalks between men and women.

Keihan, in addition refers to the background of Rouhani and his role in cracking down the student’s uprising and threatens that “is it the time for a new purge in the revolutions? Before it is too late, they should come back from the edge of the crag and a set an example for the future.”

Rouhani’s speeches and gestures are despite the fact that he has Mostapha Pour-Mohammadi, one of the main perpetrators of the Massacre of 1988, as his minister.

Also, according to Etelat newspaper dating back to 1981, Rouhani was the one demanding the execution of political prisoners in public, in Tehran University.

Apparently Rouhani has forgotten the fact that he was the first cruel executioner of forced veiling at work.

While Rouhani speaks about freedom, especially in universities, everyone knows that it was Rouhani that ordered the crackdown of the students’ uprising in 1998 and said:
“These (students) are cheaper and more despicable than to be referred to as an overthrowing movement.”

According to Etelat newspaper dating back to 1981, Rouhani was the one demanding the execution of the political prisoners in public, in the Tehran University.