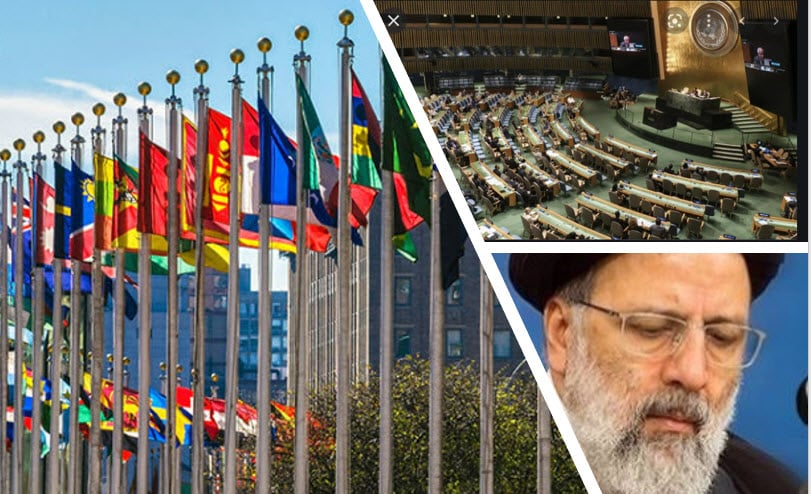 The United Nations General Assembly is less than a few days away from giving a platform to a mass murderer. Unless good sense prevails and he is barred from mounting the podium, Iranian regime President Ebrahim Raisi will address the annual gathering on Tuesday, ostensibly to speak on themes of justice and freedom. When he does so, he will be less than two years removed from his role in one of the worst crackdowns on those very concepts in recent years. Furthermore, his unmolested entry into the UNGA will surely enhance his sense of impunity with regard to Iran’s single worst crime against humanity – a massacre of political prisoners in which he played a leading role more than 30 years earlier.
In 1988, Raisi occupied the role of deputy prosecutor in Tehran. The position provided him with early opportunities to demonstrate his enthusiasm for capital punishment and other forms of corporal punishment, as well as his brutal intolerance of dissent. Thus it set him on the path to becoming one of four officials to serve on the Tehran “death commission” that was established in response to then-Supreme Leader Ruhollah Khomeini’s fatwa declaring that all members and supporters of the MEK are considered mihrab or “enemy of God” and sentenced to death.
Khomeini ordered his subordinates to “annihilate the enemies of Islam immediately,” specifying that a capital sentence should be applied to anyone who “at any stage or at any time maintains his [or her] support for the Monafeqin.” That term translated as “hypocrites,” was and remains the regime’s derogatory name for the People’s Mojahedin Organization of Iran (PMOI/MEK), the leading voice of opposition to the theocratic system and the source of over 90 percent of the massacre’s victims.
The overall death toll from the massacre is over 30,000 in the space of about three months. This figure reflects the mechanical efficiency with which figures like Ebrahim Raisi carried out Khomeini’s order. The death commission operated by summoning political prisoners and asking them to state their names and affiliations before being subjected to an interrogation that often lasted only a few minutes before a sentence was passed. In line with Khomeini’s guidance, anyone who professed loyalty to the MEK was summarily executed. And over time, the criteria for this outcome broadened still further.
In one case that was cited in a letter to Khomeini from his would-be successor and the regime’s sole critic of the massacre, the panel reportedly demanded that a prisoner condemn the MEK and commit to fighting on the front lines of the war in Iraq. The prisoner complied in both instances but was then asked whether he would also commit to walking through minefields on behalf of the regime. When he questioned this line of inquiry, his interrogator declared that the prisoner was still holding onto his beliefs and therefore ordered his execution.

There are countless stories much like this one. Many were conveyed second-hand by former political prisoners and relatives of the massacre’s victims in video recordings and live events that organized to protest Raisi’s ascent to the presidency. The National Council of Resistance of Iran held a virtual conference on the topic last month featuring over 1,000 former political prisoners as well as various European policymakers and scholars of international law.
At least two such scholars made the case for the 1988 massacre to be labeled as an instance of genocide, on account of the fact that the MEK had been targeted not just on the basis of their political views but also on the basis of their religious identity, namely as adherents to a moderate, apolitical form of Islam that is fundamentally incompatible with the mullahs’ hardline theocracy. Geoffrey Robertson, a UK human rights barrister, added that if the label holds, the international community is obligated under the Genocide Convention to take measures to hold Raisi and other perpetrators accountable.
Raisi is, of course, the prime target for such accountability, and not just because he has attained the presidency. Many of the massacre’s survivors describe Raisi as having been especially ruthless in his imposition of capital sentences for men, women, and children alike. That apparent enthusiasm led to Khomeini personally broadening Raisi’s mandate as the massacre wore on, allowing him to make up for the perceived “weakness of the judiciary” by ordering summary executions in several cities other than Tehran.

In recent years, Raisi has openly defended his own legacy and Khomeini’s, emphasizing the supposed infallibility of the supreme leader and affirming the belief the mass execution of pro-democracy activists is “God’s command.” In November 2019 and for several months thereafter, Raisi used his command of the judiciary in order to expand upon his 30-plus-year legacy of brutality, overseeing key aspects of the regime’s crackdown on an anti-government uprising that spanned nearly 200 cities and towns.
Approximately 1,500 peaceful protesters were shot dead in a matter of days, and at least 12,000 were arrested. The judiciary then implemented a campaign of systematic torture that lasted for several months and sought to elicit false confessions which might set the stage for aggressive prosecution of activists and dissidents. Such crackdowns naturally recall attention to the 1988 massacre and raise questions about whether the regime’s actions might build toward something similar in the current era.

Those questions are made more urgent in the absence of a serious international response to the crackdowns, which echoes the lack of a serious response to the massacre itself. In an open letter to Iranian authorities last year, seven UN human rights experts noted that all relevant bodies failed to follow up on a 1988 resolution that acknowledged that year’s surge in politically motivated executions.

“The failure of these bodies to act,” the letter stated, “had a devastating impact on the survivors and families as well as on the general situation of human rights in Iran and emboldened Iran to continue… a strategy of deflection and denial.”
That effect on Iran’s sense of impunity will surely be reinforced if Raisi is welcomed at the UN General Assembly by various Western leaders and diplomats who are fully aware of his role both in killing 30,000 political prisoners and in torturing thousands of other detainees.
When Raisi’s prospective audience arrives at the General Assembly, it will likely arrive amidst loud reminders of his status as a mass murderer. If the event’s organizers and participants feel shame at this, as they should, then they should remember they still have an opportunity to halt Raisi’s speech, to walk out in protest, or to stand up and demand that he faces charges at the International Criminal Court for genocide and crimes against humanity.