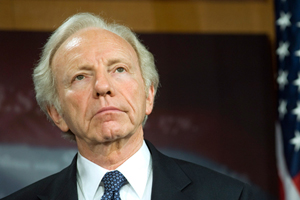 The Iranian regime is a ‘great country being held captive by a fanatical group of extremists’, former US Senator Joseph Lieberman will tell a rally of the Iranian Resistance in Paris.

He also urged the United States to work closely with the Resistance to topple the regime in Tehran, and praised NCRI chief Maryam Rajavi as an ‘extraordinary leader’.

He says in a video message: “You have tremendous support from people inside Iran and outside. And hopefully you will have increasing support from the governments in the world including the United States because you are in every sense our friends, our partners for freedom and peace.

“I look forward to being with you on a day that is not too distant in a free Tehran, in a free Iran led by a moderate civilized leadership that would bring this great country back to the community of nations of the world.”

Excerpts of transcript of video message by former U.S. senator Josef Lieberman to the major Iranian opposition rally on Saturday in Villepinte, north of Paris

“Mrs. Rajavi, dear friends of the National Council of Resistance of Iran, thank you very much for giving me this opportunity to share a few words with you. I really wish I could be there in person as I was last year and I have spoken over and over again about what an experience it was. I spoke to more people at this event than any single event in my life including in 2000 when I was the democratic candidate for vice-president of the United States.

“But the event that you are now and I had the privilege to attend last year was noteworthy for more than just the number of people. It was the principles of commitment that filled the room. It was the patriotism that I could feel all of you have for your country, for a great country, for Iran, a great country with a great history and great culture that is now being held captive by the fanatical group of extremists.

“I felt principles in that room and that was the quest for freedom which is something America can identify together with you. I repeat what I said last year that the United States of America should be working closely with your resistance group and others in opposition to the regime in Tehran not just because the enemy of my enemy is my friend. That is not the case here. You are our friends in every way possible and most important in terms of the quest for freedom and moderate expression of Islam that is inclusive.

“Let me say a final word to each of you. I was strengthened when I attended this meeting in Paris last year, as I assume you were strengthened. I hope that strength gives you confidence about the future inevitably. As individuals you may ask yourself: Is it possible that we bring about a change of regime in Iran? And I want to say to you that it is. I am confident that it is and will happen because of the lessons that history teaches us. Remember what the great Anthropologist Margaret Meden once said: Never underestimate the capacity of a small group of committed citizens to change history and that is the way history is usually changed.

“Let me go back to Thomas Paine, the great American patriot at the time of American Revolution. A small band of Americans going up against mighty British Empire, who would have thought that they could succeed and Thomas Paine said to his fellow American patriots: We have it within our hands, within our capacity, to change the world to begin the world again. And in fact they did. I have the same feeling about the Resistance to the regime in Iran. You have been extraordinary “leader, Mrs. Rajavi. You have tremendous support from people inside Iran and outside. And hopefully you will have increasing support from the governments in the world including the United States because you are in every sense our friends, our partners for freedom and peace.
I send you every good wish. I look forward to being with you next year and I look forward to being with you on a day that is not too distant in a free Tehran, in a free Iran led by a moderate civilized leadership that would bring this great country back to the community of nations of the world.”

Meanwhile, in an interview with Fox News , Mrs Maryam Rajavi, the President-elect of the National Council of Resistance of Iran said on Friday that the West trying to find a “moderate” in the government is an “illusion,” and she branded Tehran “the epicenter of extremism and Islamic fundamentalism” that covets a nuclear ability.

Maryam Rajavi made the remarks to FoxNews a day before the largest gathering of Iranian opposition which will be held in Villepinte, north of Paris.

Fox News report said: “A litany of top former government officials from the United States and other western nations are set to address the gathering in France, including former New York City Mayor Rudolph Giuliani.”

Many others who could not attend the gathering sent video messages.