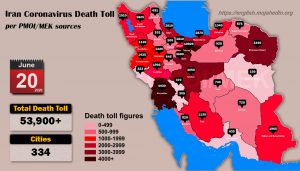 · Dezful doctors say the number of Coronavirus patients is increasing every day. The medical staff are tired. We need doctors and nurses. The IRGC and their Naval officials paid a visit and saw our needs, but they did not help.

· According to doctors in Ahvaz, regime governor and local officials are giving priority to security issues. They do not accept the recommendations of the University of Medical Sciences and other competent authorities, doubling the prevalence of the disease.

· Alborz University of Medical Sciences: We have entered the second peak of the outbreak. The toll for hospitalization and mortality is increasing. The second wave is much harder to control

· In Bushehr, 227 people are added to the Coronavirus patients every day, Bushehr is going from red to the state of black

Contradicting his remarks in the early days of the Coronavirus outbreak, today at the meeting of the National Coronavirus Combat Taskforce (NCCT), Rouhani said, “The virus is neither going away nor can it be eradicated in a short time, nor can we do anything to ensure that our people have complete immunity.” Despite all this, he added, “The restrictions in all Economic, educational, cultural, and spiritual activities can be lifted. Therefore, we are not saying that anything should be locked down, nor is that possible. Neither the people will accept a lockdown … nor is it necessary,” reported the state TV today. Earlier, “In one of the meetings at the NCCT, the Health Minister, challenging Rouhani’s insistence on lifting the restrictions as soon as possible, had said that the Coronavirus is like a wrestling match that, even though you may be ahead, it will suddenly knock you down … Apparently, the president intends to make the situation look normal, while it seems we’re on the verge of a second wave of the virus now! ” reported the Khabar-Fori news site today.

In Khuzestan Province, doctors in Dezful said, “The number of patients is increasing every day, and the work pressure on Ganjavian Hospital is very high. Five physicians specializing in infectious diseases have been under severe pressure for the past four months. Six sections and three ICU departments are full of patients. We need doctors and nurses to help us. Patients go to hospitals when they are in bad condition, suffer from fever, and are in a critical situation. Some people came from the army and the IRGC and even the IRGC naval force. We asked them for help, and they saw our needs, but so far, they have not helped us at all.”

In the provincial capital Ahvaz, most hospitals are grappling with Coronavirus. From the beginning, Razi Hospital was dedicated to Coronavirus cases. In the next step, all the capacities of hospitals of social welfare, Amir al-Mo’menin, and the police force, and several wards of other hospitals were allocated to Coronavirus. Then, beginning 20 days ago, a part of the IRGC’s Baghaii Hospital was reluctantly allocated to Coronavirus patients. According to doctors, for the governor and local authorities, the regime’s priority is security, and as a result, they ignore the recommendations of the University of Medical Sciences and other competent authorities, and this doubles the prevalence of the disease.

According to the state-run TV in Khuzestan, June 18, a faculty member at Jundi Shahpour University of Medical Sciences said, “In April, the number of people with the disease was on average 30 a day for nearly a month, but, it is now over 600-700. Unofficial figures suggest other things; that is to say, it has gone up twenty-fold.”

The head of Dezful Grand Hospital was quoted by IRNA news agency, June 20, saying: “The capacity for accepting Coronavirus patients in Dezful Grand Hospital, where patients from Dezful, Shush, Gatvand, and other surrounding cities are hospitalized for treatment, has been exhausted. Presently, in addition to the 10 departments allocated to admission and hospitalization of Coronavirus patients, we have to hospitalize patients in the emergency department.”

In Alborz, the deputy director of Health at Alborz University of Medical Sciences told the state-run website Tabnak, yesterday, “We have entered the second peak of the Coronavirus outbreak. The toll for hospitalization and mortality is increasing. The second wave is much harder to control.”

In Bushehr, the IRGC News Agency, Fars, reported yesterday, “Over the past week, an average of 227 people have contracted the virus in the Province every day, which means that Bushehr is going from red to a black state.” The vice-president of Bushehr University of Medical Sciences, also quoted by Fars yesterday, said, “In recent days, approximately 70 to 80 percent of the samples have tested positive.”

“Our situation is not good at all. We are one of the red provinces … We will pay a heavy price,” said Kermanshah’s Governor speaking to the Zagros state TV yesterday.

In Hormozgan, the president of the University of Medical Sciences told the official state agency, IRNA, “As a result of the increase in the number of patients, 200 beds have been added to the 500 beds for Coronavirus patients over the past week.” IRNA also quoted the regime’s Governor in Hormozgan as saying, “Traffic restrictions have been imposed on all roads, transportation hubs and passenger ports in Hormozgan, and … all villages have been quarantined for two weeks since the beginning of last week, and unnecessary travel to the villages are prohibited.”

In West Azerbaijan, the deputy governor told Mehr official news agency today, “The situation in West Azerbaijan is red, and the number of patients and the condition of those critically ill is deteriorating day after day. The second wave of the disease is on its way … We must wait for a humanitarian catastrophe in this regard.”