The Foreign Affairs Committee of the United Kingdom’s House of Commons posted a report produced by the British Committee for Iran Freedom (BCFIF) on its website. The report serves as an official recommendation to the UK government and sends a strong message to the religious fascism ruling Iran. This evidence submitted by BCFIF to the UK Parliament underlines the need to counter the Iranian regime’s threats and support the Iranian people and their organized resistance.

The International Atomic Energy Agency’s Board of Governors called on the Iranian regime on Friday to stop denying the agency access to two suspected former sites and to cooperate fully with it, diplomats attending the meeting told the Reuters.

According to Reuters this resolution calls on the Iranian regime “to fully cooperate with the Agency and satisfy the Agency’s requests without any further delay, including by providing prompt access to the locations specified by the Agency.”

The international community needs to start paying closer attention to the discrepancy between the Iranian regime’s coronavirus narrative and the reports coming from the Iranian Resistance independent sources inside the country. According to the regime’s Health Ministry, the total number of infections is around 200,000, while the death toll is very slowly creeping toward 10,000. But the People’s Mojahedin Organization of Iran (PMOI/MEK) has collected information from Iranian medical staff and ordinary citizens which points to an infection rate in the millions, and a death toll more than six times higher than the official figure.

221 U.S. lawmakers presented H. Res. 374 in support of the Iranian people and their resistance.

A majority of members of Congress in the U.S. co-sponsor a resolution condemning terrorism by Iran’s regime
H.RES.374 also supports “the Iranian people’s desire for a democratic, secular, and non-nuclear republic of Iran.”
221 lawmakers reiterate several acts of terrorism committed by the Iranian regime, including:
The foiled terror plot against the Iranian Resistance’s 2018 Free Iran in France
Bomb plots against the PMOI/MEK in Albania, which led to the expulsion of the regime’s ambassador from Tirana
H.RES.374 also refers to other acts of espionage committed by the regime against the NCRI & PMOI/MEK
The Congressional Resolution also draws attention to human rights violations by the Iranian regime
H.RES.374 urges the U.S. Administration to “call on nations to prevent the malign activities of the Iranian regime’s diplomatic missions, with the goal of closing them down, including the Iranian embassy in Albania.”
The lawmakers further reiterate their support for the peaceful pro-democracy protests of the Iranian people.
NCRI President Maryam Rajavi: “This Resolution, co-sponsored by a bipartisan majority of members of Congress, reflects the American people’s support for Iranian people’s desire for a free Iran, a republic based on people’s free vote, separation of religion and state, gender equality, respect for the rights of ethnic groups, and a non-nuclear Iran.”
Congressman Tom McClintock (R-CA):“This is the first House resolution for a free Iran relying on the Iranian people for a free Iran”
Rep. Brad Sherman (D-CA): “America stands in solidarity with brave Iranians for a new chapter. We stand with the Iranian people.” 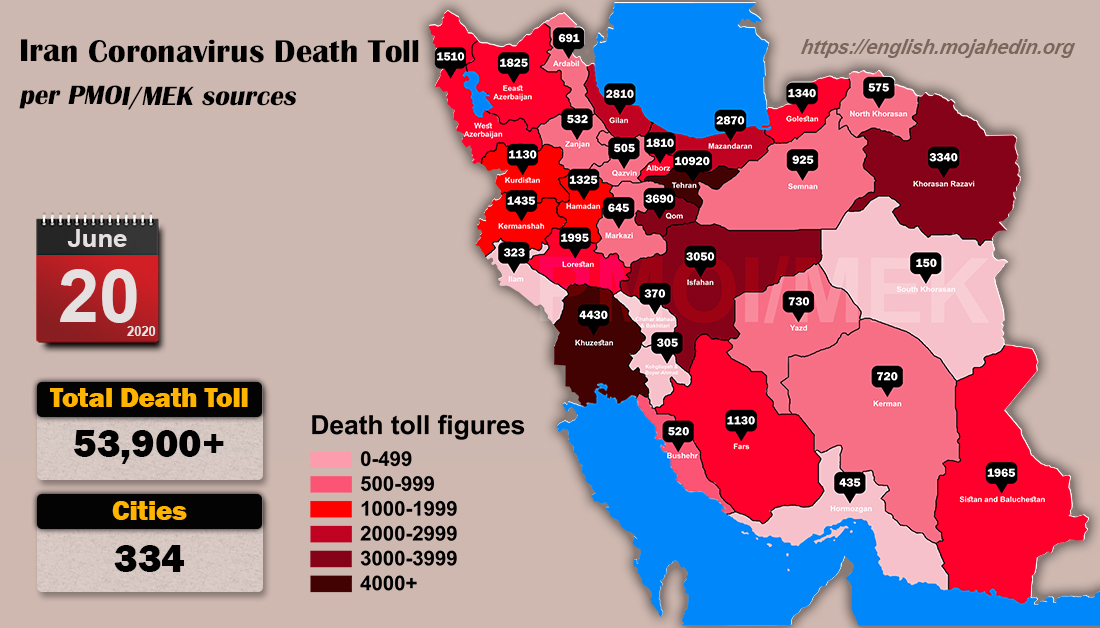 · Dezful doctors say the number of Coronavirus patients is increasing every day. The medical staff are tired. We need doctors and nurses. The IRGC and their Naval officials paid a visit and saw our needs, but they did not help.

· According to doctors in Ahvaz, regime governor and local officials are giving priority to security issues. They do not accept the recommendations of the University of Medical Sciences and other competent authorities, doubling the prevalence of the disease.

· Alborz University of Medical Sciences: We have entered the second peak of the outbreak. The toll for hospitalization and mortality is increasing. The second wave is much harder to control

· In Bushehr, 227 people are added to the Coronavirus patients every day, Bushehr is going from red to the state of black

All evidence suggests that the fugitive cleric and former Iranian judiciary official and judge, Gholamreza Mansouri, who was under arrest and investigation in Romania, has been assassinated by the Iranian regime’s intelligence services using their signature methods.

His death is similar to the serial killings carried out by the Ministry of Intelligence and Security (MOIS) during the 1990s and later, and the subsequent elimination of perpetrators such as Saeid Emami and Massoud Dalili. It also resembles the assassination of Massoud Molavi in Turkey on November 14, 2019. Reuters reported on April 2, 2020, that two intelligence officers at the Iranian regime’s consulate in Istanbul had directed the assassination of Molavi. Hesam-addin Ashena, Rouhani’s adviser and former deputy Minister of Intelligence and Security pointed to the setup of Saeed Emami’s “suicide” in referring to Gholamreza Mansouri’s death in his Twitter account.

Marking the start of the 40th year of resistance against the religious fascism ruling Iran, the day of martyrs and political prisoners

On Saturday, June 20, 2020, marking the beginning of the 40th year of the Iranian people’s resistance against the religious fascism ruling Iran, an online conference connecting some 2,000 locations around the world was held. Mrs. Maryam Rajavi, the President-elect of the National Council of Resistance of Iran (NCRI), and a group of cross-party parliamentarians and dignitaries from various European, North American and Middle Eastern countries attended and addressed the conference. The Participants emphasized their support for the Iranian Resistance and the Iranian people’s struggle for regime change in Iran and the establishment of democracy and a republic based on universal suffrage.

A look at Iran’s society provides two very contrasting images. The more prominent image, the one that is being reflected in the lives of millions of Iranians, is one of poverty and misery, which manifests itself in daily protests of unpaid workers, the heartbreaking situation of child labor, illiteracy, grave-dwellers, a vast market of people selling their vital body organs to make ends meet. If you turn the page, you’ll see a totally different picture, a class of ruling elite and their pampered children, living a life of luxury earned through the looting of national wealth and the meager earnings of poorer classes.

Systematic and institutional corruption is an image of the millions of Iranians who fell victim to the looting of the clerical regime. On August 18, 2019, the state-run ISNA news agency quoted Ahmad Tavakoli, a member of the Expediency Discernment Council who said, “If no measures are taken, several million of people will be added to the city outskirts.” These outskirts are areas that are bereft of any proper infrastructure and services and are inhabited by impoverished people who struggle to fulfill their most basic needs.

Zeinab Jalalian: Although I will not be able to go on a hunger strike after 13 years in prison, I will go on strike

Zeinab Jalalian, who was transferred from Khoy Prison to Qarchak Prison on May 10, has announced that she will go on a hunger strike in the coming days if she is not transferred back to Khoy Prison. The political prisoner was recently diagnosed with the Coronavirus but is being held in the quarantine ward of Qarchak Prison with no access to medical treatment.

Sunday, June 21, 2020, marks the 219th day since the beginning of the nationwide Iran protests.