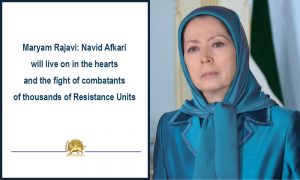 The UN, the Security Council, the European Union, and all human rights defenders urged to take effective action

Silence amount to a green light to, and complicity in, the continuation of the regime’s crimes

This morning, 27-year-old Navid Afkari, the Iranian wrestling champion, was executed after brutal torture for participating in the 2018 uprising, despite widespread domestic and international protests.

Mrs. Maryam Rajavi, the President-elect of the National Council of Resistance of Iran (NCRI), said: The people of Iran, especially the courageous youth, will not remain silent vis-à-vis the savage execution of this brave son of Shiraz and will rise up in solidarity with the heroic people of Fars Province over his unjust execution. The religious dictatorship ruling Iran cannot survive for even one day without suppression, execution, and torture. By shedding the blood of the brave children of Iran, such as Navid, it seeks to preserve its rule in the face of the Iranian people’s uprising. But Navid’s martyrdom will only add fuel to the flames of the Iranian people’s uprising and will strengthen their determination to overthrow the clerical regime and to establish freedom and democracy.

Ms. Rajavi added: The United Nations Security Council, its member states, the UN Human Rights Council and High Commissioner for Human Rights, the EU, and all international human rights organizations must undertake effective and concrete measures against the Iranian regime for the execution of Navid Afkari and 120,000 political prisoners. Silence and inaction are tantamount to a green light to, and complicity with, the regime to continues its atrocities.

According to reports, the clerical regime is refusing to hand over Martyr Navid Afkari’s body to his family. In fear of popular protests, they are trying to secretly bury him to prevent any gathering from paying tribute to him.

Previous articleBreaking News: The Clerical Regime in Iran Hanged the Wrestler Navid Afkari
Next articleIran’s Regime Is Under Severe Threat From Another Nationwide Protest