Maryam Rajavi: UN Experts Report Doubles the Need To Refer the File on the 1988 Massacre in Iran To the Security Council and To Bring To Justice Perpetrators of This Ongoing Crime Against Humanity 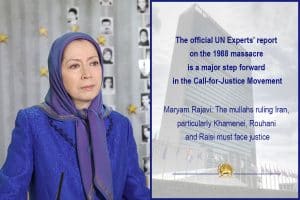 Following the publication of a report by United Nations experts on the 1988 massacre of political prisoners as a “crime against humanity” and a call for an “in-depth” and “independent” investigation into the matter, Mrs. Maryam Rajavi, the President-elect of the National Council of Resistance of Iran (NCRI), said the report is a testament to the resistance of those martyrs in defense of their ideals. Thirty-two years after the massacre, this report is a major and qualitative step in the advancement of the movement for justice for the victims of that massacre, she added.

Mrs. Rajavi noted that the report, which emphasizes the regime’s non-compliance with its “obligations under international human rights law,” including the non-disclosure of the fate and burial place of those executed, heightens the need to refer this dossier on the ongoing crime against humanity to the UN Security Council, and to bring to account the officials and perpetrators of this great crime of the century.

She added that the current rulers of Iran, especially Khamenei, Rouhani, and Ebrahim Raisi, the regime’s Judiciary Chief, many ministers and judiciary officials as well as the executioners and officials of the Intelligence Ministry and the Revolutionary Guards who were involved in the killing of political prisoners in 1988 and throughout the 1980s must be brought to justice.