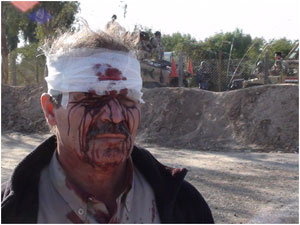 NCRI – While extensive support for Ashraf within Iraq and in the international level is spreading, especially after the adoption of a resolution on Ashraf at the European Parliament on November 25, the December 17 seminar in Washington and December 22 international conference in Paris on Ashraf in addition to formation of a new government in Iraq, the Iranian regime and its Iraqi agents are taking advantage of Christmas and New Year holidays to implement new suppressive measures against Ashraf residents. 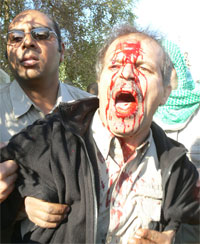 On Saturday, December 25, the Iraqi forces, upon the order of a committee within the Prime Minister’s office tasked to suppress Ashraf, forced a group of eight Ashraf residents providing services for the patients in the past 20 months to leave the hospital in Ashraf. They used threats and intimidation to get the group out as part of increasing medical restrictions imposed on Ashraf residents.

Although it was clear that the aim of the unlawful measure was to impose further medical restrictions on the residents and use this as a means of torture and suppression, the group of eight residents decided to leave the premises in order to avoid confrontation with the Iraqi forces. To this end, they brought in a crane and a lorry to remove their trailer from the premises. After the trailer was lifted, the Iraqi forces commanded by Heidar Azab Mashi, the Iraqi military officer, prevented the removal of the trailer and tried to steal it together with the crane and the lorry. The Iraqi forces had surrounded the area where the group was based since the previous day and did not allow any food, water, and warm clothes to reach them, confined in the trailer. 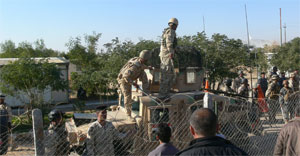 In order to put an end to the crisis, representatives of Ashraf residents suggested to Lieutenant Col. Abdul-Latif Abol-Amir Hashem, the Commander of Iraqi suppressive forces that if the hospital needs a trailer, Ashraf residents are willing to pay for the cost of purchasing one. But stealing the trailer is a clear violation of international or even Iraqi laws and the residents will not cave in to this cruel condition. Lt. Latif said he would raise the matter with the Committee. 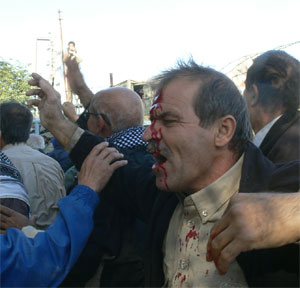 Upon the orders of the suppressive committee and under the command of Col Latif, today, at 2:00 PM, the Iraqi forces, supported by 25 Humvee military vehicles,  attacked the PMOI members stationed in the hospital and beat them up severely using sticks, clubs and batons. Dozens of PMOI members were beaten and wounded, some of whom are in serious conditions. Behrouz Mohajer, a PMOI member is in critical condition due to blows to his chest.

At the same time, the Iraqi forces prevented the entry of two specialists on ophthalmologist and on internal diseases who had gone to Ashraf after a long period.

Following the transfer of protection of Ashraf to Iraqi forces in 2009, people in hospital and facilities were completely transferred to Iraqis. Since then the Iraqi forces have turned the hospital into a center for suppression and torture.

Since a month ago, the Iraqi forces, acting on the order of the committee in charge of suppression of Ashraf, started installing fences further around the hospital to include parts of Ashraf’s land, thus providing them more freedom to suppress the residents.  Currently the hospital is completely invaded by the Iraqi forces and their command is stationed there.

While bringing to the attention of the UN Secretary General, the UN Security Council, UN Secretary General’s special representative for Iraq, the U.S. Ambassador to Iraq and the Command of US forces in Iraq, the violent actions of Iraqi forces, the Iranian Resistance calls for return of Ashraf protection to the U.S. forces and a permanent presence of a UN monitoring team in Ashraf in order to prevent any further bloodshed.
The Iranian Resistance also calls on human rights bodies and organization, the unions and associations of physicians to condemn the supp 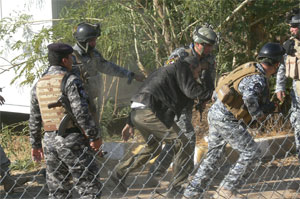 ressive acts by Iraqi forces and take urgent measures to end them.

Secretariat of the National Council of Resistance of Iran
December 26, 2010

Previous article
Call to save the life of a Kurdish political prisoner
Next article
Iran: 7 hangings reported by state media