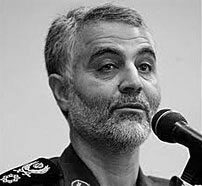 NCRI – Qassem Suleimani, commander of the Iranian regim;s terrorist Qods force, speaking before the mullahs’ Assembly of Experts on September 3rd, acknowledged the role of the regime in the massacre of Camp Ashraf residents on September 1.

The IRGC affiliated news agency wrote of 4 September: “Suleimani addressed the issue of Iraq and Camp Ashraf in which more than 50 of them (residents of Camp Ashraf) were killed, many were among the leaders of the Monafeqin (the regime’s term used to describe the MEK). This development was more important than the Mersad operation and, in reality, God’s promise became reality.”

These statements reflects urgent need of the mullahs regime engulfed in crises for showing power, especially after the presidential sham election and upsurge of internal feuding.

The Iranian Resistance has previously exposed the role of Qods terrorist force as well as Suleimani’s role in the massacre of Camp Ashraf residents in several statements including a September 2 statement (No.23) which said:

“the large-scale massacre of Camp Ashraf residents on September 1 was ordered by the Iranian Supreme Leader Ali Khamenei following chemical bombardment of Damascus outskirt and increasing probability of US attack, and implemented by forces under the command of Iraqi Prime Minister Nuri al-Maliki in complete coordination with the Iranian regime’s Islamic Revolutionary Guards Corps’ terrorist Qods Force.

On Tuesday, August 27, the Commander of the terrorist Qods Force, Ghassem Suleimani, hastily travelled to Iraq and met with Maliki at 10:30 pm outside of regular working hours.In that meeting, Maliki’s National Security Advisor Faleh al-Fayadh was also present, and Suleimani and Maliki agreed on the timing of the attack on Ashraf. Practical measures in anticipation of this attack were taken immediately after Suleimani’s visit.”