Lethal attack on Camp Liberty: 23 dead, $10 million in damages, destruction of large sections of the camp Iranian Resistance had warned U.S. and UN dozens of times of a new bloodbath 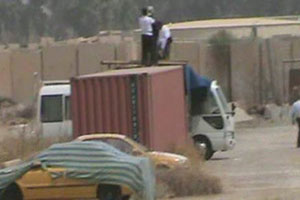 At 7:40 pm on Thursday, October 29, Camp Liberty was targeted by a barrage of 80 rockets of various kinds resulting in loss of life of 23 residents.

Due to this criminal attack the electricity and all communications of the camp were cut off and large sections of the camp and a great number of trailers caught fire. The explosions were so powerful that many trailers were reduced to rubble and a number of the T-walls either fell down or broke down. The explosions made craters of 4, 5, 6 or 7 meters wide in various places in the camp. Some 357 trailers, 10 dining halls, 275 air-conditioners, a number of the water, fuel and sewage tanks, the water distribution network, generators and the electric grid, vehicles, and furniture and home appliances were either completely destroyed or rendered useless. The extent of damages is estimated at $10 million.

On Friday morning, October 30, a UN delegation visited the camp for merely one hour. They just went to one section that had been destroyed and then went to see the martyrs. They took pictures and videos.

The Iranian Resistance and the residents’ representatives, as well as many parliamentarians and prominent international figures, repeatedly warned the United States and the United Nations in the past two months of the Iranian regime’s intent to stage another massacre. However, no preventive measures were taken.

The National Council of Resistance of Iran (NCRI), in its September 7, 2015 statement about the transfer of Iranian regime Intelligence hirelings to Camp Liberty, announced: They “could not have passed the several checkpoints on their way to Liberty without prior coordination and active participation of Iraq’s security institutions. This move clearly imperils the security of PMOI members in Camp Liberty and betrays machinations by the Iranian regime and its proxies in Iraq for the psychological torture of PMOI members and paves the way for future massacres.”

On September 10, residents’ representative wrote to U.S. and UN officials: “This morning once again two dozen of Iranian regime’s intelligence ministry agents under the name of families had gone to Camp Liberty with the help of Iraqi security forces under the supervision of Faleh Fayyaz. They are very provocative and shouting and threatening the residents…This is a very clear indication of Iranian regime’s intention for another massacre in Liberty.”

And an NCRI statement on September 17 stated: “a group of Quds Force and MOIS officers travelled to Iraq to collect information on Camp Liberty, such as commute of residents to the hospital or for emptying the black water, how the foodstuff is procured and transferred to the camp… In coordination with regime’s embassy, they went to the airport along with the intelligence officers under command of Faleh Fayyad, including Sadeq Mohammed Kadhim and Ahmed Khozair, in order to collect information… Moreover, this group also met with some of regime’s hirelings in Iraq that in recent years had actively participated in conspiracies against Ashraf and Liberty and got all their information on the PMOI and Liberty residents.” The NCRI urged the United States and the United Nations to secure and guarantee the safety and security of the residents.

On September 21, twenty-six members of the U.S. Congress wrote to the Secretary of State on the probable risk of an attack on Camp Liberty: “To alleviate this perilous humanitarian situation, we respectfully request you to urge the Iraqi government to allow the MEK to bring helmets and other protective gear they already own into the Camp. We find it troubling that one year after Prime Minister Haider AI-Abadi took office, Faleh al-Fayadh, who reportedly oversaw previous attacks on MEK residents and was National Security Advisor to then Prime Minister Nouri AI-Maliki, retained oversight of Camp Hurriya. All security personnel who were involved in the previous attacks on the residents must be replaced and Camp Hurriya’s file must be turned over to agencies and individuals in the Government of Iraq not controlled or influenced by the Iranian regime.”

On September 29, the residents’ legal advisor wrote to UN Special Representative Ján Kubiš and a number of U.S. officials: “Today the army Intelligence forces (AIF) on the order of the suppressive committee, in a suspicious and provocative act, took film and pictures of inside the camp from different locations. Two intelligence elements by the names Ghasem and Mohammad, while they were in civilian outfit in order to hide their identity and also hide that they are taking film and pictures, went to different police posts around the camp and in some places over the roof of the vehicles, and started to take film and pictures of inside the camp from those posts. Ghasem of AIF used to carry out the same measures on the order of Major Ahmad Khozeir in Camp Ashraf, and Major Ahmad would deliver the films and pictures to the Iranian embassy…. (It) is reminder of Major Ahmad Khozeir and Captain Heydar Azab’s measures in camp Ashraf prior to September 1st 2013 massacre of Ashraf residents. The residents are concerned about the measures of the suppressive committee and have expressed their concerns to UNAMI in many occasions, but unfortunately no serious measures has been taken for the security of the residents to insure that the events happened in Camp Ashraf would not be repeated in camp Liberty. Some photos of the AIF taking film and pictures from inside the camp are enclosed.”

He again wrote to the SRSG and the abovementioned officials on October 4: “Today again the army intelligence forces (AIF) on the order of the suppressive committee, in a suspicious and provocative act, took film and pictures from inside the camp. Captain Heydar Azab of the suppressive committee along with two elements of the AIF by the names Alla and Moaied climbed over the perimeter T-walls of the camp to take film and pictures from inside the camp. (Photos are enclosed). This is a matter of great concern for the residents and it is reminder of their measures prior to September 1, 2013 massacre of residents in Camp Ashraf.”

On 5 October 2015, residents’ representative wrote to U.S. officials: “I am very disappointed that you do not take into serious consideration our concerns and those of the residents regarding the dangers of the transfer of Iranian regime elements and agents, –posing as the residents’ families, to perimeter of Camp Liberty…As for the bloodbaths we witnessed in Ashraf and Liberty, we had always given advance warnings against the plots and conspiracies prepared by the religious fascism ruling Iran and its elements in Iraq. Had those warnings received the proper attention, those massacres could have been prevented or at least limited in scope…Currently, we keep detecting indications, which we have shared with you, and are cause of concern.” And he went on to emphasize: “These measures are taking place while the Liberty dossier and management team remains under the control of Maliki’s national security advisor Falih al-Fayyadh and officers who as Iranian proxies, played a direct role in massacring the residents, and have been in charge of the siege imposed on them for seven years.”

On October 6, thirty-two prominent bipartisan U.S. personalities from four administrations wrote to Undersecretary of State Anthony Blinken: “Make it clear to the Government of Iraq that the presence of MOIS activities at Camp Liberty is unacceptable and in violation of assurances made by the Iraqi government, the United States government, and the United Nations.” And they added: “The security of the residents and their protection is vital. To this end, the GoI must be told that the world expects practical action from it on this issue such as putting different people in charge of Camp Liberty instead of Falih Fayyadh and intelligence officers who were all involved in the previous massacres of the residents.”

Previously, numerous letters had also been sent out on this matter to U.S. and UN officials. For example on June 26, the residents’ representative sent a letter to the UN Secretary-General and High Commissioner for Refugees, as well as a number of U.S. and UN officials, that based on reports obtained from inside the country: “the terrorist Quds Force (QF) has asked the “IRGC Think Tank” in Baghdad which is an espionage and intelligence center, to complete its information about the latest conditions in Camp Liberty… Similarly, regime’s ambassador Danaifar has asked Faleh Fayyad and Sadeq Mohammed Kadhim, camp’s management, to present their latest information on the camp and the activities of the residents to regime’s embassy.”

The letter added “Based on another report, IRGC Brigadier General Iraj Masjedi, senior advisor to the terrorist QF Commander Qasem Soleimani, has told Faleh Fayyad that some QF commanders insist that an attack similar to the September 1, 2013 attack on Ashraf should be carried out against Camp Liberty.”

MEP Gérard Deprez wrote to EU High Representative Ms. Mogherini on July 13: “We are receiving very worrying reports from Camp Liberty in recent weeks. What is adding to our concern is that the Iranian regime after the signing of a nuclear agreement might increase its conspiracies against its opponents. These reports have created huge concerns for me and many colleagues in the European Parliament. Last month together with some 220 MEPs we issued a statement raising these concerns. In addition, some 60 colleagues wrote an urgent letter to you on 9 July.”

What appears above is just a handful of ample warnings that clearly indicate the attack on October 29 and the massacre of Camp Liberty residents were avoidable. As such, in order to thwart further bloodshed, the Iranian Resistance once again calls for provisions and assurances for the safety and security of Camp Liberty by the United States and the United Nations. It further emphasizes that elements of the Iranian regime should not be allowed to the vicinity of the camp and that camp’s dossier should be transferred to people that have no links to the religious fascism ruling Iran.

Secretariat of the National Council of Resistance of Iran
October 31, 2015