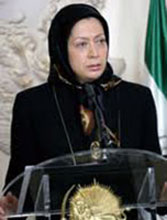 NCRI – Following the horrible and antihuman crime of Nouri al-Maliki in Ashraf at the behest of Khamenei, the bloodthirsty supreme leader of the Iranian regime, Mrs. Maryam Rajavi, President-elect of the Iranian resistance, while paying tribute to the martyrs of Ashraf, said in a message: “the number of martyrs rose every hour yesterday due to big number of wounded residents because of antihuman methods adopted by the Maliki’s battalions-the same as those of Gadhafi- and lack of access to immediate treatment. Thus, the number of martyrs reached 33 by 24 a. m. Friday night.”

According to latest reports, more than 300 Ashraf residents were wounded, at least 178 of them were shot by direct fire. Also, 18 of the wounded have been taken hostage by criminal assailants.

This is while the injured are still in critical condition and some of them continue to be in comma or serious conditions. In fact, the government of Iraq is implementing the policy of gradual death on the wounded by tightening the siege on Ashraf.

Mrs. Rajavi urged the United Nations and the US forces to take immediate measures to treat the wounded who are in urgent need of medical care, and to remove the obstacles that Maliki has placed to impede entering Ashraf, observing the scene, becoming aware of the events, and publishing a comprehensive and accurate report on the events of bloody Friday of Ashraf for the attention of public opinion.

Mrs. Rajavi also underscored the need for the US and UN immediate measures to release the wounded who have been taken hostage by the Maliki’s government. She further asked the UN Security Council to conduct a comprehensive investigation over the Maliki’s merciless murder of new Iraq’s dictator Maliki in Ashraf.

Secretariat of the National Council of Resistance of Iran
April 9, 2011