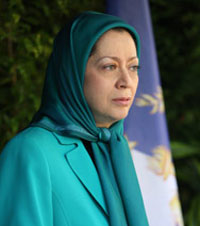 NCRI – The President-elect of the National Council of Resistance of Iran, Maryam Rajavi, has called on the United Nations Secretary General Special Representative for Iraq, Mr. Ad Melkert, to visit Camp Ashraf without delay.

Mrs. Rajavi stated: As the most senior officials of the Iranian regime continue to cheer and applaud Nouri al-Maliki’s large-scale crime against humanity perpetrated against Camp Ashraf; as Maliki’s justice minister is busy setting the stage for another attack and massacre against Ashraf in consultation with the mullahs during his visit to Tehran; while the Iranian regime’s foreign minister will soon depart to Baghdad for the same purpose; and in circumstances where for the past 19 days, the Iraqi government continues to obstruct the burial of 35 residents who were murdered during the April 8 bloodbath at Ashraf, Mr. Melkert’s visit to Ashraf and his subsequent report to the UN Secretary General and Security Council is an extraordinarily essential and urgent step for the adoption of preventative measures.

Mrs. Rajavi called for the intervention of the UN Secretary General and the Security Council in issuing a resolution on protecting the defenseless and besieged residents of Ashraf and in taking other imperative steps in this regard, just as the Security Council undertook its obligation to protect innocent civilians in Libya.

Secretariat of the National Council of Resistance of Iran
April 26, 2011