Mrs. Rajavi in letter to leaders of EU : Prevention of compulsory displacement of Ashraf residents and annulment of suppressive deadline for closure of Ashraf by the end of December 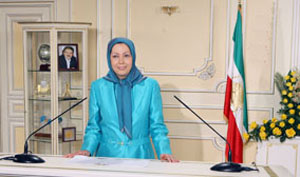 Mrs. Rajavi in letter to leaders of EU on eve of Foreign Affairs Council session:
• Prevention of compulsory displacement of Ashraf residents and annulment of suppressive deadline for closure of Ashraf by the end of December

• Sanctions are inadequate in confronting this regime, final solution lies in a regime change by the Iranian people and their Resistance

NCRI – Concurrent with the EU Foreign Affairs Council session, President-elect of the Iranian Resistance Mrs. Maryam Rajavi, in separate letters to Herman Van Rompuy, President of the European Union, José Manuel Barroso, President of the European Commission, and Baroness Ashton, High Representative of European Union, urged them to lead an international effort to thwart a forced displacement of 3,400 Iranian dissidents residing in Camp Ashraf in Iraq and to foil a planned massacre and creation of another Srebrenica.

The letter goes to say: Reports from within the Tehran regime confirm that the Iraqi forces, acting under the supervision of terrorist Qods Force, plan to attack Ashraf again and cause a new bloodbath. In summary, the plan entails violent relocation of the residents to different garrisons across Iraq and their subsequent massacre and extradition to the clerical regime.

Mrs. Rajavi added: The Iraqi Government intends to peddle the plan for forcible relocation to international community as a peaceful solution or at least garner the agreement or non-opposition to this plan from its foreign interlocutors, including the European Union. This is why it promises that it will accept UN monitoring at the new locations. Experience has shown, however, that none of the Iraqi government’s promises should be trusted. Six hours before the massacre on April 8, the U.S. embassy, quoting the Iraqi Prime Minister, assured the residents that Iraq will not use violence. For this reason, seven months ago, the residents announced that they would accept being relocated internally only if the new location would be protected by the U.S. forces or U.N. Blue Helmets.

President-elect of the Iranian Resistance emphasized: Massacre in Ashraf is part of mullahs’ strategy to save their faltering regime. Two other components of their strategy are acquiring nuclear bomb and export of terrorism and fundamentalism and domination of the region. Thus, although comprehensive sanctions against this regime are necessary, they are not sufficient to prevent that regime from access to nuclear bomb.  The crucial solution is the regime change by the Iranian people and Resistance. No language other than decisiveness is efficient against the regime that compels the Iraqi Government to support the Syrian dictator; occupies foreign embassies inside Iran, and takes diplomats hostage.

Mrs. Rajavi asked the European Union leaders to make their efforts to realize following items in the EU Council, including the Thursday session of Foreign Ministers:

Second- Terminating all diplomatic relations with the regime and closure of all embassies;

Third- Banning any forcible relocation of Ashraf residents inside Iraq and annulling the year-end deadline until the UNHCR work is completed and all the residents have been transferred to third countries. The EU must make granting credits and economic and financial aids and continuation of business relations with Iraq contingent upon finding a peaceful and consensual solution for Ashraf;

Fifth- Accepting urgently a number of the injured and the patients of the residents of Ashraf.

Secretariat of the National Council of Resistance of Iran
December 1, 2011

Previous article
Mrs. Rajavi welcomes closure of Norwegian embassy in Tehran and the mullah regime’s embassy in London and calls on European states to sever ties with the Iranian regime
Next article
Al-Maliki declares war against UN & international community