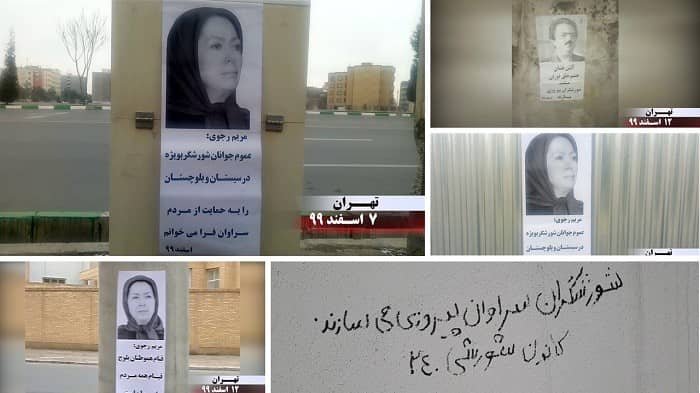 “Saravan rebellion will make victory, Saravan is not alone”

Simultaneous with the uprising and mass protests by the rebellious youth and the people of Sistan and Baluchestan, Mujahedin-e Khalq (MEK/PMOI) supporters and the Resistance Units posted banners and wrote messages of the Resistance’s Leadership in solidarity with the Baluchi compatriots and their uprising and its calls on the general public to rise in support of the uprising everywhere.

The people of Saravan and other cities in Sistan and Baluchestan rose up in protest to the repression and massacre of fuel carriers and freedom-loving youth of Saravan, Zahedan, and other cities and regions of the Province. In addition to Tehran, the MEK supporters and Resistance Units carried out their activities in Tabriz, Kermanshah, Karaj, Qazvin, Kazerun, Sanandaj, Arak, Iranshahr, Boroujen, Zahedan, Konarak, Shiraz, Zanjan, Mashhad, Yazd, Behbahan, Sari, Ahvaz, Shahriar, Shahrekord, Khash, Ilam, Rasht, Dezful, Shahr-e-Rey and the city of Qods.

Secretariat of the National Council of Resistance of Iran (NCRI)
March 6, 2021

Previous articleIran: If Not Concurrent With Strong Condemnation of Rights Violations and Terrorism, Irish Foreign Minister’s Visit To Tehran Will Be Construed by the Mullahs as a Green Light To Continue Their Crimes
Next articleIran: Khamenei’s Contradictory Remarks About Social and Economic Crisis