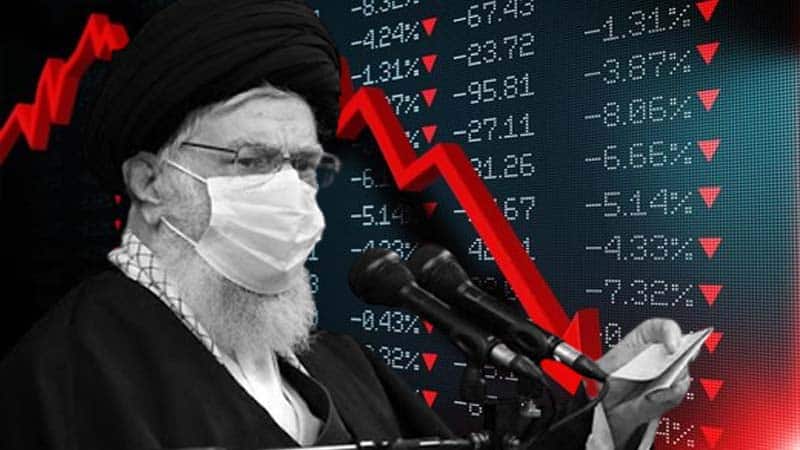 After weeks of absence, the Iranian regime’s Supreme Leader, Ali Khamenei, appeared on Friday, on Iran’s national arbor day. While holding the country’s highest position of power, Khamenei merely complained about social and economic crises without giving any solution. He also made contradictory remarks about the current coronavirus policy.

“Last year, authorities warned about the coronavirus outbreak when it first began. I also warned our people on the same arbor day. I feel this year there is more danger. This year we know the danger better this year and know [the virus] has widely spread. It had not reached this height last year. Everyone should abide by [health protocols]. Whatever the National Covid-19 Combat Task Force said, [people should follow],” he said.

The major Iran protests in November 2019 rattled the regime’s foundations. Khamenei knew that given his regime’s failure in resolving people’s demands, there will be more uprising. Thus, when Covid-19 entered Iran, he embraced it. The regime started an inhumane coronavirus policy. While the virus had entered Iran in early January, according to the documents revealed by the Iranian Resistance, the regime covered up the existence of the virus and announced it in late February. Since then, the regime has tried to downplay the crisis.

Khamenei was the first person to call this deadly virus a ‘test’ and ‘blessing’ and downplay this crisis.

“In my opinion, this is not that big of a misfortune. We’ve had bigger calamities. This is a temporary issue. It’s not extraordinary. These kinds of events happen in the country. Of course, I don’t want to minimize it. But let’s not make a big deal out of it. It’s something that has happened, and we hope that it won’t last long,” he said on March 3, 2020.

Comparing the Covid-19 crisis to the Iran-Iraq war, he said: “War is naturally a terrible and violent phenomenon. But this violent and terrible phenomenon which lasted eight years, had blessings for us as I counted them earlier, and there are more to be said about that. In other words, we achieved good and freshness from it.”

After months of hard work, scientists discovered the Covid-19 vaccine, and a global vaccination campaign began. The regime first started a vaccination scam by blaming sanctions for preventing the regime from obtaining vaccines from the COVAX payment facility, jointly managed by Geneva-based Gavi, the Vaccine Alliance, and the World Health Organization (WHO).

Gavi immediately rejected this claim, with one of its spokespersons confirming there was no “legal barrier” to Iran obtaining vaccines through COVAX, as the U.S. Treasury’s Office on Foreign Assets Control had issued a license covering coronavirus vaccine procurement.

Finally, on January 8, 2021, Khamenei explicitly banned the entry of certified vaccines. He also said he had already instructed authorities not to import these vaccines, confirming that they were falsely blaming sanctions to deceive the public.

“Importing American and British vaccines to the country is forbidden. I have also told the authorities. If Pfizer can produce a vaccine, why do they want to give it to us? They have mass casualties,” Khamenei said.

While the state-run media identify the regime’s wrong economic policies and the authorities’ corruption for the continued economic crisis, Khamenei refused to offer any solution and only shed crocodile tears for people’s hardships.

“Sadly, people’s livelihood is not good these days—this an enormous grief for us. There are very much high prices on the [Persian] New Year’s Eve, such [prices of] fruit,” he said.

This rising inflation rate is due to the regime’s decision to increase the dollar exchange rate.

“Rising dollar prices and artificially keeping the dollar exchange rate high is a reality accepted by all elements of society. Therefore, we must accept the bitter fact that the main culprits of economic costs and challenges and shrinking people’s livelihoods are [the regime’s] domestic policies,” wrote the state-run Jahan- Sanat on February 27.

Khamenei is aware of these economic decisions and is behind them as the regime’s highest authority.

The National Council of Resistance of Iran (NCRI) previously revealed in an exclusive report how Khamenei and his Revolutionary Guards (IRGC) control Iran’s economy. Khamenei’s assets are estimated to be above $90 billion. The full report could be found here.

In his remarks on Friday, after planting two trees, Khamenei claimed that “Environmental activity is a religious and revolutionary work.”

“The destruction of the environment is a big waste that wastes the future of mankind, so the authorities and all the people must stand against it, or there will be catastrophic events,” he claimed.

All the while, Khamenei’s private army, the IRGC, plays a devastating role in ruining Iran’s environment and wildlife by plundering Iran’s national resources.

According to a report by the regime’s “Strategic Majlis Research Center,” published in September 2016, some 60% of Iran’s forests have been destroyed in the past three decades. In a detailed report on July 2019, the People’s Mojahedin Organization of Iran (PMOI or MEK) revealed how the regime had destroyed Iran’s forests. The report could be found here.

In addition to the role of Khamenei and his regime in destroying Iran’s environment, they target environmentalists.

In January 2018, the IRGC Intelligence arrested five environmental activists. The IRGC killed Dr. Kavoos Seyed-Emami under torture in prison and subjected other activists to inhumane torture.

One of these detainees, Niloufar Bayani, in an open letter to the regime’s Judiciary in February 2020, disclosed details of inhumane tortures she had gone through. According to the Iran Human Rights Monitor, “Bayani said she had been brutally tortured during 22 months of illegal incarceration in Ward 2A of the Islamic Revolutionary Guard Corps. She wrote that her interrogators had made her make animal sounds and threatened her with lethal and paralyzing injections.”

Khamenei appeared on Friday and made these contradictory remarks to somehow deceive the public by shedding crocodile tears. But his remarks contradict his actions and those of his regime’s authorities. The fact mentioned above shows these contradictions.

Khamenei’s remarks also underline that the regime cannot resolve people’s crises and is not willing to answer their demands. Thus, as the state-run media warn and daily protests in Iran show, the regime should await another nationwide uprising.

“[Protests] are a time bomb under the skin of society. No one knows when it will explode, but its dangers for the [regime] are more devastating than an attack by a foreign force. Those who realized history doubtlessly embrace that [social turmoil],” wrote the state-run Jahan-e Sanat on February 28.