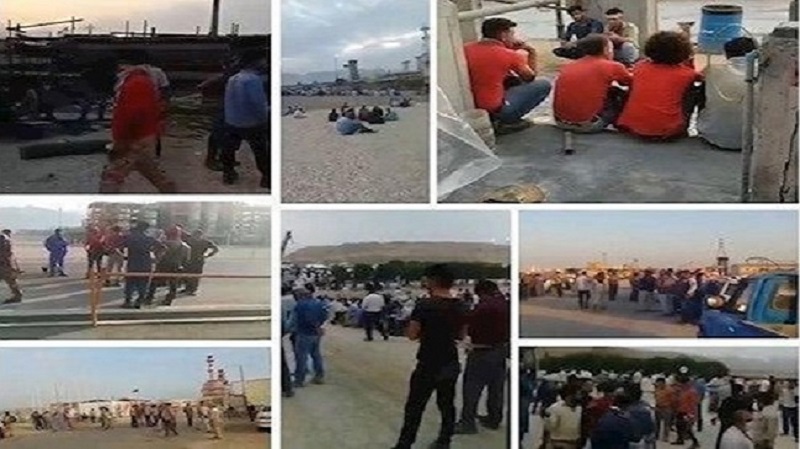 The striking workers are enduring intolerable working conditions in extreme heat and challenging living conditions. They do not have job security because they have been forced to sign temporary contracts. Nor are they covered by health insurance, nor do they receive pensions.  The employers can fire them at any time. Their wages are many times lower than the poverty line, and even these meager wages have not been paid for several months.

Regime officials and state-assigned managers, who are mainly IRGC and other regime-affiliated institutions, are trying to break their strike and unity by making hollow promises, offering to pay part of their overdue wages, or by threatening them, but workers have emphasized that they would continue their strike until all their demands are met.

In another development, railway workers have also begun their protest and strike. Karaj railway workers have been on strike since Wednesday, August 13, to protest the non-payment of their salaries for several months. Workers say their families are hungry, and they do not even have money to buy bread. Khorasan railway workers also stopped working today. Tehran railway workers gathered in front of the railway offices today and demanded payment for their unpaid wages and benefits.

The Haft Tappeh sugarcane complex workers announced their 60th day of the strike by gathering in the city of Shush and announced that they would continue to protest and strike until their demands are met.

Mrs. Maryam Rajavi, the President-elect of the National Council of Resistance of Iran (NCRI), hailed the striking workers and employees who have risen up for their essential rights, and again called on the public, especially the youth, to rise up in their support.

Ms. Rajavi pointed out that as long as the medieval system of Velayat-e-Faqih remains in power, poverty, unemployment, and inflation will increase. The rights of the workers and the Iranian people, in general, can only be achieved with the overthrow of this regime and the establishment of democracy and the rule of the people, she added.

Mrs. Rajavi urged the International Labor Organization and trade unions, as well as the labor rights defenders, to condemn the clerical regime’s anti-labor policies and to support the workers’ protests and strikes and their demands and rights.