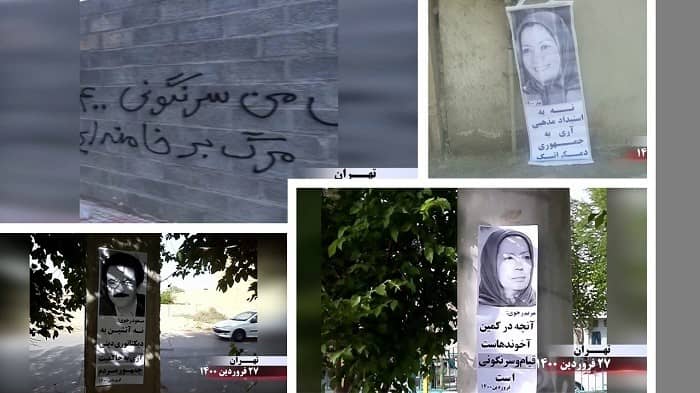 “Our vote is regime change, yes to a democratically-elected republic”, “Democracy, freedom, with Maryam Rajavi”

Slogans on placards, graffiti, and banners calling for the boycott of the regime’s sham election included: “Maryam Rajavi: Presidential election masquerade does not have a scintilla of legitimacy in the eyes of the Iranian people,” “Maryam Rajavi: nationwide boycott of the election, a response to the murderers of 1,500 martyrs of November 2019 uprising,” “Maryam Rajavi: The Iranian people’s nationwide boycott of the upcoming sham election is the flip side of the people’s uprisings,” “Massoud Rajavi: The Iranian Resistance is proud to have boycotted the regime’s illegitimate election in the past 40 years,” “Massoud Rajavi: No to religious dictatorship, yes to a democratically-elected republic,” “Massoud Rajavi: Our vote is regime change and boycott of the sham election,” “Our vote is regime change, yes to a democratically-elected republic,” “Massoud Rajavi: Iran’s destiny to be determined not by the mullahs’ ballot box, but by the uprising of Iran’s valiant children,” “Boycotting the election farce is a patriotic duty,” “Our vote is regime changes, yes to the democratically-elected republic, any vote is a dagger to the heart of our children,” “Rise up to continue the uprisings and to free Iran from the mullahs’ occupation,” “Democracy, freedom with Maryam Rajavi,” “Down with Khamenei,” and “Down with Khamenei, long live freedom,”

Secretariat of the National Council of Resistance of Iran (NCRI)
April 21, 2021

Iran Elections 2021: What To Know About the Upcoming Sham Presidential Elections