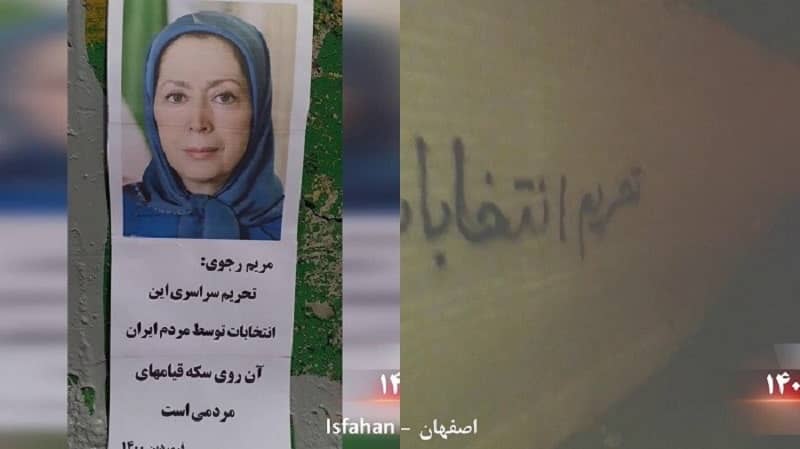 At the beginning of the Iranian New Year, supporters of the Mujahedin-e Khalq (MEK/PMOI) and Resistance Units called for a nationwide boycott of the regime’s presidential election by installing banners and placards and writing graffiti in public places.

Some of the slogans, inspired by messages of Mrs. Maryam Rajavi, the President-elect of the National Council of Resistance of Iran (NCRI), and Mr. Massoud Rajavi, leader of the Iranian Resistance, called for the boycott of the regime’s election farce, including: “No to the murderers of 1,500 martyrs of November 2019 uprising, no to the sham election,” “Maryam Rajavi: the new year could and should be turned into a year of the uprising,” “Maryam Rajavi: nationwide boycott of the election, a response to the murderers of 1,500 martyrs of November 2019 uprising,” “The Iranian people’s nationwide boycott of the upcoming sham election is the flip side of the people’s uprisings,” “Boycotting the sham election is a patriotic duty,” “Massoud Rajavi: Our vote is regime change and boycotting the sham election,” “Massoud Rajavi: We will not rest until our occupied homeland is free from dictatorship. To achieve this, we will have to fight a hundred times more,” “Massoud Rajavi: Boycotting the election farce is a patriotic duty.”

Secretariat of the National Council of Resistance of Iran (NCRI)
April 4, 2021