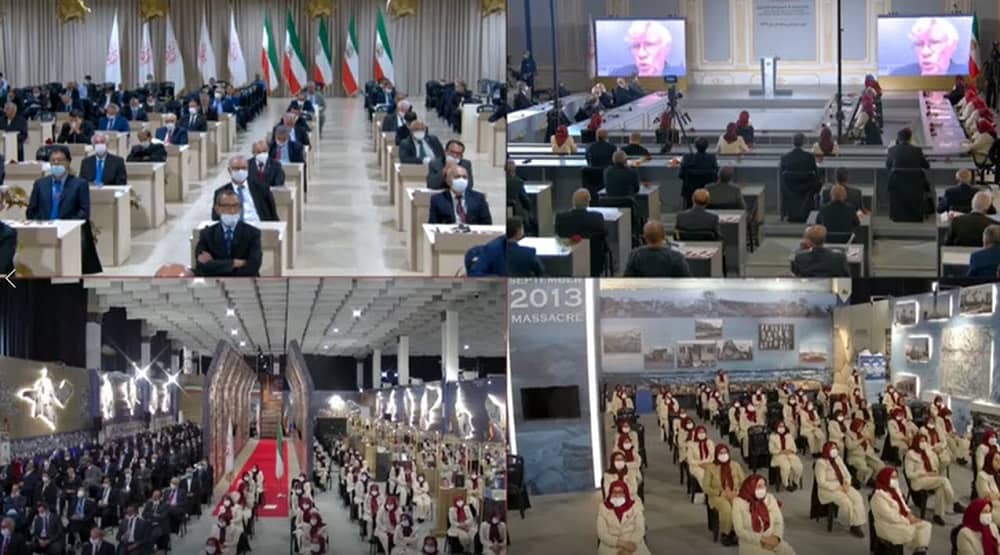 On Friday, the National Council of Resistance of Iran hosted a virtual conference as part of its ongoing “Call-for-Justice” movement regarding the 1988 massacre of political prisoners. Though always an urgent priority for the pro-democracy coalition, the massacre assumed newfound significance in June when it was confirmed that Ebrahim Raisi would be the new president of Iran. More than 1,000 former political prisoners took part in Friday’s conference, and many of them delivered remarks recalling their interactions with Raisi around the time of the massacre.
At the outset of 1988, Raisi was deputy public prosecutor for the capital city of Tehran, and in the summer of that year, he willfully became one of four officials to serve on the Tehran “death commission” that was tasked with overseeing the implementation of a fatwa by the regime’s founder and first supreme leader, Ruhollah Khomeini. The religious edict declared that all persons affiliated with the leading opposition group, the People’s Mojahedin Organization of Iran (PMOI/MEK), were inherently guilty of “enmity against God” and should be executed if they stood loyal to the MEK and its ideals.

Many of the individuals who went before the death commission simply refused to distance themselves from the MEK. In a speech on Friday, NCRI President Maryam Rajavi described this resilience in the face of repression as a continuous source of inspiration for activists both inside Iran and throughout the Iranian diaspora. “For us, the Call-for-Justice movement is synonymous with perseverance, steadfastness, and resistance to overthrow this regime and establish freedom with all our strength,” she said.

Mrs. Rajavi then added that it was most likely the desire to diminish this source of inspiration that led regime authorities to variously deny the reality of the massacre, downplay its scale, and obscure the identities of its victims, more than 90 percent of whom were members of the MEK. But detailed investigations by activists, including members of the MEK itself, have yielded the conclusion that at least 30,000 political prisoners were executed over the course of about three months in 1988. Meanwhile, the possibility remains that a more thorough and resource-intensive investigation by the United Nations or another international body would reveal an even higher death toll, as well as exposing additional details about the regime’s approach to the killings.

The gathering of 1,000 PMOI/MEK prisoners is a unique capital for the Call-for-Justice movement and the Resistance that seeks to overthrow the regime. Over the past 33 years, they have contributed to the Call-for-Justice Movement with their effective participation. #1988Massacre pic.twitter.com/8aqnFVSDWN

Some of the former political prisoners who took part in Friday’s conference suggested that the estimate of 30,000 casualties is conservative, in light of reports that some prison wards and entire detention facilities left no survivors to inform the world about how many of their cellmates were killed. Inwards where there were survivors, however, the resulting disclosures include chilling accounts of mass execution following merciless and mechanical trials, with the death commissions often interrogating political detainees for as little as a minute before issuing a death sentence.
“During my time in prison, on some nights, up to 600 people were executed,” said Parvin Kouhi, who added that she survived the 1988 massacre only because she spent much of that time in solitary confinement. When she returned to the general prison population, she found it almost devoid of inmates. All other known affiliates of the MEK had been executed.
Similar stories of trauma and unlikely survival were offered in advance of the conference by 16 former political prisoners who provided the NCRI with video testimonials for publication on the coalition’s official website. Asghar Mehdizadeh, for instance, described the entire population of the political ward being blindfolded and beaten before he witnessed 15 groups of between 10 and 15 people being systematically paraded through the “death corridor.” Mehdizadeh personally witnessed at least a dozen executions being carried out simultaneously, and although he recalled fainting at the site, his video message also underscores perceptions of the MEK’s resilience by noting that that victims chanted slogans like “death to Khomeini” and “long live freedom” in their final moments.

The potential implications of this resilience were highlighted in Friday’s conference, not just NCRI officials and former political prisoners but also by lawmakers, legal experts, and human rights defenders from throughout the world. Kumi Naidoo, who served as Secretary-General of Amnesty International from 2018 to 2020, praised the “strength and courage” of those who have defied the Iranian regime’s four decades of repression, then said:
“The 1988 massacre was a brutal, bloodthirsty massacre, a genocide. It is moving for me to see the strength and courage of people who have been through so much and seen so much tragedy and endure these atrocities. I’d like to pay tribute to all the MEK prisoners and applaud you… The EU and broader international community must take the lead on this issue. This government, led by Raisi, has even greater culpability on the issue of the 1988 massacre. Governments that behave like this must recognize that behavior is not so much a show of force as an admission of weakness.”

In his remarks, Geoffrey Robertson, First President of the UN Special Court for Sierra Leone, discussed the nature of the 1988 massacre and said it amounts to genocide.
Referring to Khomeini’s fatwa calling for the annihilation of the MEK and calling them Mohareb (enemies of God) and used by the regime as the basis of the massacre, Robertson said, “It seems to me that there is very strong evidence that this was a genocide. It applies to killing or torturing a certain group for their religious beliefs. A religious group that did not accept the backward ideology of the Iranian regime… There is no doubt that there is a case for prosecuting [regime President Ebrahim] Raisi and others. There has been a crime committed that engages international responsibility. Something must be done about it as has been done against the perpetrators of the Srebrenica massacre.”
Many other participants in the conference reiterated this appeal while emphasizing the importance of a formal investigation into the 1988 massacre, as a precursor to prosecution at the International Criminal Court. Eric David, a Belgian professor of International Law, also noted that in absence of an international case, any nation may prosecute any perpetrator of crimes against humanity based on the principle of universal jurisdiction. Indeed, Sweden is currently doing just this with former Iranian prison official Hamid Noury, the first person to ever face accountability for his role in the 1988 massacre.

Previous articleIran News in Brief – August 29, 2021
Next articleIran: The 1988 Massacre Of Political Prisoners Amounts To Genocide